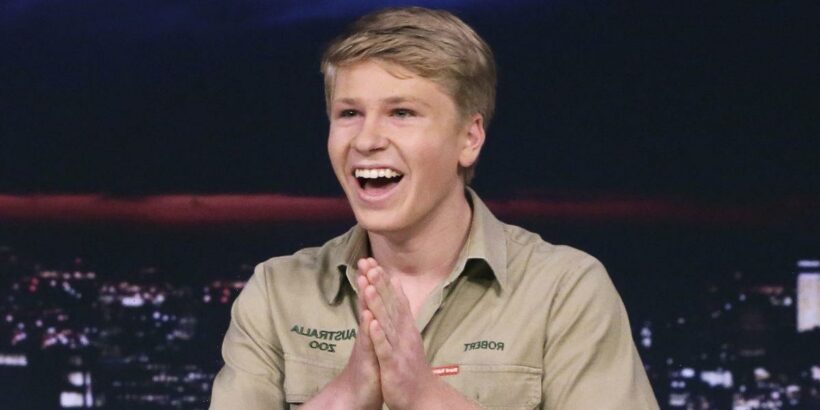 Young Robert Irwin has become a global superstar for his dealings with dangerous beasts like crocodiles, tigers and venomous snakes.

But it looks like the teen animal guru is set for a career change as he's just been given a new job as a TV weatherman on the hit Aussie breakfast show, Sunrise.

The 18-year-old wildlife conservationist has famously followed in the footsteps of his late father Steve Irwin, who hung out with killer animals on his beloved TV shows.

But Robert, who is the spitting image of his late dad Steve, will be taking his talents away from the animal kingdom and towards the TV studio.

Robert is set to fill in as a guest weatherman for Sam Mac for a week while the regular forecaster is on personal leave.

The young Irwin spoke to Sunrise hosts David Koch and Natalie Barr on Tuesday, where he joked he's coming to poach Sam's job, telling them: "Sam Mac, I am coming for ya!"

He said he was "excited" for the new job and insisted he'd be bringing his bubbly personality to screens.

Excited presenter Koch replied: "This is going to be fun!"

Robert recently went viral again after a fan asked for his phone number in a clip that has done the rounds on TikTok.

The gushing tourist told him: "I think you are so cute, I was wondering if I can have your number."

The animal ace replied: "Well I'm very flattered. Thank you, erm where are you visiting from?" to which Megan said that she lives in Utah in America.

He replied: "Cool, Utah is great. I tell you what, the easiest way is usually on Instagram so that my people can monitor it and see it when it comes through because my number is getting mixed."

Eventually, he told her he'd look her up on social media after politely getting her name, so romance could be on the cards.

Robert is the son of wildlife expert Steve Irwin, who was known as The Crocodile Hunter for his many nature documentaries championing the rights of animals around the world.

The teen is also the younger brother to Bindi Irwin, 23, who got married to wakeboarder Chandler Powell in 2020.

Robert was just two years old when Steve tragically died in 2006 from a stingray's attack.