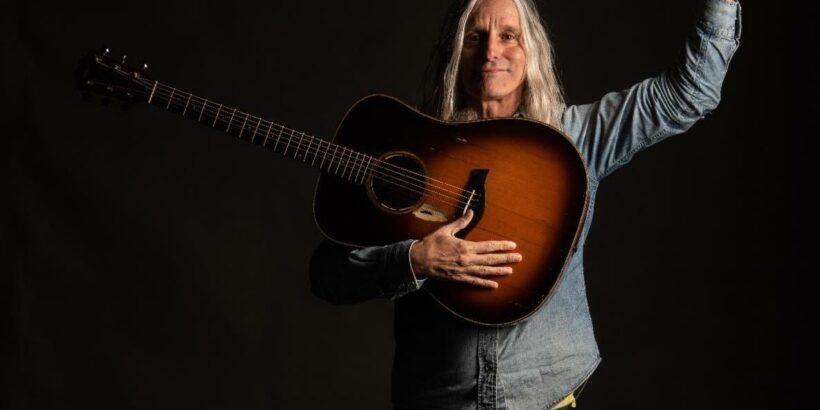 Steve Poltz puts Dylan-esque wordplay and the electric acid-test colors of the Sixties on display in his new song and video for “Can O’ Pop.” It’s the latest track off the San Diego-raised, Nashville-based songwriter’s upcoming album Stardust & Satellites, out Feb. 18.

“Can O’ Pop” is a fizzy delight, with Poltz weaving in geographical allusions to tongue-twisting towns like Opelousas and Albuquerque while the Wood Brothers drummer Jano Rix lays down a beat with his congas. In one dizzying stream of lyrics, Poltz recalls how he “met his Bordeaux, at the chateau, left his chapeau, down in Tupelo,” before shrugging, “what the heck / I ended up in Quebec.” It’s a delirious delivery reminiscent of “Subterranean Homesick Blues.”

“It’s weird to see your song all grown up with a college degree,” Poltz says of its evolution into an animated tale. “What a glorious video that dude Mr. Hatch made. I just watched it while on tour with the Wood Brothers. They let me ride on their fancy tour bus with them and they had a big old TV and we howled and danced and sang along at the top of our lungs. All I did was write the song with my pal Jano Rix. That video dude did all the heavy lifting.”

Poltz, who dramatically raised his profile by co-writing “You Were Meant for Me” with Jewel, will reunite his cult band the Rugburns for a pair of shows this weekend in Solana Beach, California. He returns to Nashville to release Stardust & Satellites with a show at City Winery on Feb. 22, before launching a U.S. tour in March.