Danko Jones looks back on his band's last Australian tour in 2013 fondly, saying if he had his way, the Toronto trio would have been back a couple of times every year since. "I'm just glad we're getting back down there," he said this week ahead of next month's long overdue Danko Jones headline tour. The band will play shows in Melbourne, Sydney and Brisbane. "That 2013 tour (when they performed at Soundwave) was great, there was lots of great bands … it was one of the wildest things and one of the most fun things we've done."

And that's saying something. Since forming in 1996, Danko Jones have toured relentlessly, taking their ferocious, take-no-prisoners stage show to a lot of countries, making a lot fans along the way. Over the same two decades they've released nine studio albums, including their rollickin' latest long player A Rock Supreme, released in April. Produced by Garth Richardson (Rage Against the Machine, the Jesus Lizard and Biffy Clyro among many others), these 11 slabs of unholy riffing are classic Danko Jones – no frills, no keys, just pedal-to-the-metal rock 'n' roll. 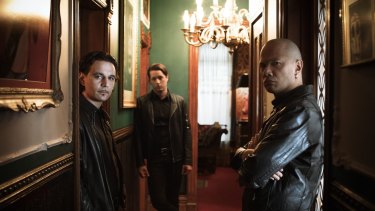 Danko Jones (right) who fronts the Canadian band that bears his name.Credit:Dustin Rabin

"We'd heard for a few years that he (Richardson) wanted to work with us and we wanted to work with him, so it was a blind date almost because we didn't really know him. Sure enough, we got along great. We laughed through the whole session and we rocked … and it shows on the record." Over 40 minutes A Rock Supreme is a glorious paean to making rock 'n' roll all day, every day. Opening with the thunderous I'm in a Band, the album showcases the guitar theatrics and clever, often tounge-in-cheek lyrics that make Jones a huge favourite on the overseas festival circuit. "We played about 15 festivals this summer, down from our usual 20 or 25 festivals but we had a great time. At Sweden Rock (in June) we played with Saxon, Ritchie Blackmore and Styx, who are fronted by Larry Gowan, who's also from Toronto. We'd never met him before, until that day, so it was nice to meet a fellow Torontonian in the middle of Sweden, it was cool."

Other tracks on A Rock Supreme, including We're Crazy, Fists Up High, Party and Dance, Dance, Dance maintain a clear Danko Jones theme – first established with original and long standing bass player John 'JC' Calabrese – of not slowing the pace or the power for anybody. Drummer Rich Knox, who joined the year before making 2015 album Fire Music, fits the Danko Jones mould perfectly. "I get asked a lot," Jones says, "about my lyrics … that they're not deep enough or socially conscious enough … and when people ask us about not changing, there's four bands I reference and they're AC/DC, Motorhead, Slayer and the Ramones. Those four bands pretty much stuck to the script from the beginning to the end and it worked for them. They've been accused of writing the same song, but hey, it's a good song, a f—ing good song."

Danko Jones are live on stage at Stay Gold in Melbourne, September 5; Crowbar in Brisbane, September 6; and Crowbar in Sydney, September 7. For more information and tickets, go to silverbacktouring.com.au

album of the week
Straitjacket Fits
Melt
(Flying Nunn)
★★★★
All gurgle and shimmer, cascading guitars and reverb-drenched vocals, the psychedelic summer broke late in New Zealand with the darkly elegant second coming of Straitjacket Fits. The flagship of Dunedin's famous Flying Nun label made like an acid dream dipped in treacle, spawning a cult hit in the USA and the famous UK press coronation of "the greatest guitar band in the world". Thirty years on, it sounds as dirty and sweet as ever.
Straitjacket Fits play with Dimmer at the Factory Theatre in Marrickville on Thursday, September 5, and Corner Hotel in Richmond on Friday, September 6. MICHAEL DWYER