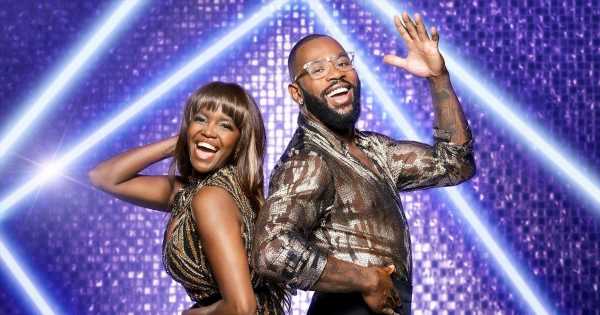 The dancing star, 31, has been partnered with rugby player Ugo and the pair have been sharing videos of their first rehearsals on social media.

Ugo joked "I put someone through their paces today" as Oti was filmed lying on the floor.

She yelled indignantly: "You wish!"

Ugo turned the camera back on himself, revealing: "It's been a long day. Sixteen hours!"

Oti parroted whatever he was saying: "It's been a long day!"

He then shared another video of Oti mocking how he talks on camera.

She copied his presenting style telling viewers to watch the show but forgot to include the time.

Rugby player Ugo also shared an update after the second day of rehearsals, where he was crawling face down across the floor like a snail. He captioned the video: "Rate my moves!"

"It's looking like a really long week," joked another.

One fan gave the iconic Strictly "sevvvvveeeeeeen" out of ten.

"It's the tired caterpillar," decided another.

Fans are hoping his moves improve before this weekend's first live show.

It looks like Oti will have to boss Ugo about even more to get him in shape to dance.