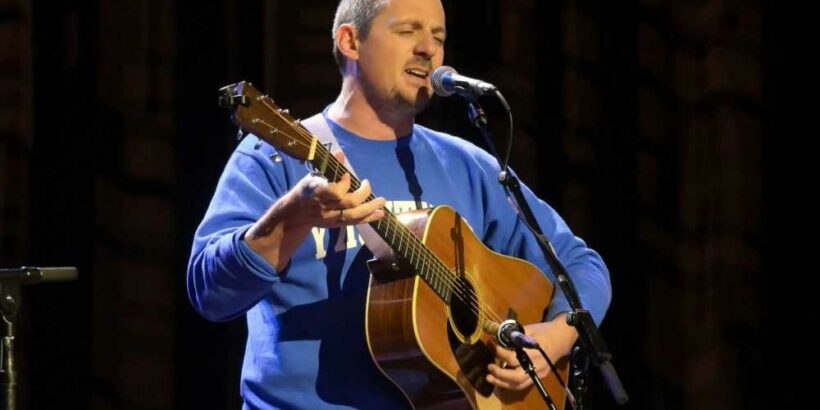 Sturgill Simpson may be signaling the end of his solo career with his most recent album, but he’s not finished playing live. On Friday night, the country musician brought his bluegrass band to the Outlaw Music Festival in Gilford, New Hampshire, and debuted new music including “Shamrock” from The Ballad of Dood & Juanita.

A fiddle-and-banjo-driven number in its original form, “Shamrock” needs no alterations for Simpson’s live performance as musicians Sierra Hull, Stuart Duncan, Tim O’Brien, and Mike Bub all show off some dazzling instrumental runs. The speedy rhythm of “Shamrock” is joined to a story about a horse who “stood about 19 hands, didn’t need no kick to go,” and suggests the thrill of hitting full gallop. Simpson also worked The Ballad of Dood & Juanita track “Juanita” into his Friday Outlaw Fest setlist.

The musicians onstage in New Hampshire also previously accompanied Simpson on the two-volume bluegrass collection Cuttin’ Grass, which rearranged his songs into all-acoustic numbers. Their performance of “Shamrock” quickly segues into an older Simpson track, “The Storm.” Originally from the 2013 album High Top Mountain, Simpson repurposed it for Cuttin’ Grass, Vol. 1, in 2020 and his performance keeps up the breakneck pace, eliciting enthusiastic screams from the crowd.

Simpson will be performing as part of the Outlaw Music Festival during September, with stops including Virginia Beach, Raleigh, Charlotte, and Alpharetta, Georgia. Additionally, he’s set to play a run of shows at New York’s Webster Hall beginning September 28th and another series of shows at Nashville’s Ryman Auditorium starting November 18th.