As artistic director of the Sydney Art Quartet, James Beck knows something out of the ordinary is needed to catch the attention of potential audience members. "We've got stiff competition, you know," says Beck. "You can sit at home and be a gamer and live in your own private universe. You have to give people good reasons to come to live music."

Since the cellist founded the string quartet in 2015, originally under the name Australian Art Quartet, the ensemble have been shaking up the classical music scene with their boundary-pushing concerts. They have staged multidisciplinary collaborations with Grandiflora florist Saskia Havekes, fragrance developer Carlos Huber and, most recently, actor David Wenham. 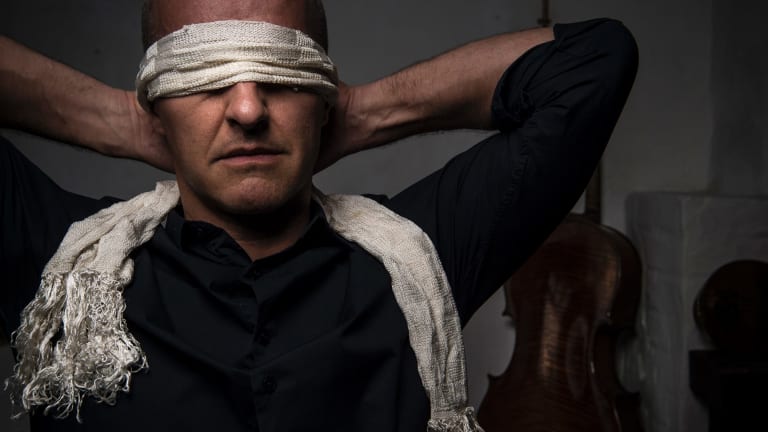 James Beck, artistic director of Sydney Art Quartet, is looking forward to getting into the moment with the audience at the ensemble’s Blind Trust concerts.Credit:Wolter Peeters

For their Butt Naked Salon, Archibald Prize-winning artist Wendy Sharpe painted live a mural of a nude composer who posed as the foursome played. The innovative and quirky programming has proven popular, winning over a committed fan base with every show this year so far at full capacity.

"We tend to attract an audience that is looking for something exciting and different," says Beck. "In many ways we're trying to meet their expectations, because they've come to expect something unusual when they come to one of our events."

For their upcoming concert, Blind Trust, ticket holders are invited to listen to concertos from Mozart and Bach, but true to the ensemble's modus operandi there is a twist. The audience will be blindfolded as the musicians play in a darkened performance space.

Beck says there is some historical context behind the idea, citing a scene many might be familiar with from the 1984 film Amadeus in which, as a child prodigy, a blindfolded Mozart doesn't miss a note while tickling the ivories. "Mozart was often asked to perform tricks and one of them was to be blindfolded and play," says Beck. "So for this one I thought why try to trick the musicians? Why don't we trick the audience?"

Beck believes the conceit will lead to a particularly intense experience for concertgoers. "I think everyone knows that if you turn off one sense, another one becomes heightened to compensate. So it's about really allowing the audience to discover something that they've never experienced before."

Joining the Sydney Art Quartet will be Erin Helyard, artistic director of Pinchgut Opera, as a guest soloist on fortepiano and harpsichord. "A lot of people have not really heard what a harpsichord can do," says Beck. "It's often heard in the distance or hidden by other instruments, so I wanted people to hear the incredible richness of this instrument."

With tickets capped at only 70 a performance, those who are lucky enough to score a seat can expect to be close to the action.

"I'd go to concerts at the Opera House and there'd be 300 people there minimum, more often than not 2000 people, and that's their definition of an intimate venue," says Beck. "I get really angry at concerts where the music is the softest thing in the room, the loudest thing is the person snoring next to you. When I was creating this, I knew it had to be intimate."

When asked what he imagines it will be like to perform to people who aren't looking back, Beck suspects he still won't find it hard to gauge their reaction. "We can hear when an audience is in the moment. That has nothing to do with if their eyes are open or closed or blindfolded. I think we'll just all get into the moment together."