Tash Sultana gets itchy feet more often than not these days after a few weeks away from touring.

There's some great days, Sultana says ahead of a performance last week in Adelaide and there's even "some really beautiful days" being on the road, but there's also days the 23-year-old feels "a little bit not yourself".

Those days she has to manage with a little extra care. 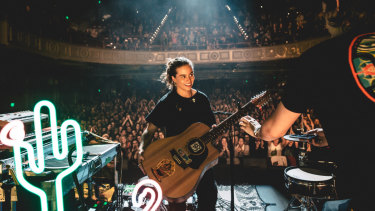 Less than four years since Sultana was busking in Melbourne there's been a huge spotlight thrown on the multi-instrumentalist. A coveted ARIA award for her album Flow State and a world tour last year were among the highlights.

Next week she plays three shows in Sydney alone, a few days later a Melbourne show at the huge outdoor Sidney Myer Music Bowl. Then, another lengthy tour of Europe and the United States.

"So much has happened," Sultana says. "I'm trying to process it all some days. I love it (performing) some days and other days I feel like 'what the f— am I doing? It comes in waves and it's about learning how to self manage things. If I'm feeling a little bit frustrated, or annoyed or tired or sad, I just try to be more present, to focus on the show."

A home recording in 2016 of the song Jungle, which has been viewed more than 40 million times online, has the distinctly personal touch that made Sultana stand out. The black and white, unedited footage has someone else briefly popping their head into the frame, a family pet trotting by in the background and Sultana's mixing desk stacked on a couple of milk crates.

"I've come a long way from all that," Sultana says with a laugh. "I'm getting mentored a bit at the moment, so I'm in a new phase of accepting knowledge that's being given to me instead of rejecting it. It's amazing how much knowledge you reject when you think you know everything. As soon as you surrender that you realise you don't know anywhere near as much as you could. 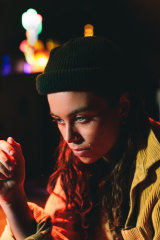 "The road is pretty long and I got to a couple of dead ends a while ago."

Perhaps the most rewarding, positive aspects professionally have come from those moments on stage, where as a solo performer the whole show rests on Sultana's shoulders.

"That's the moment that belongs to me, on stage," she says.

Crowds jumping on board include three sold-out performances last year at Brixton's O2 Academy, an achievement not lost on Sultana, who acknowledges the significance of those shows.

"It was a bit confronting, the crowd was a bit louder than normal but they were great shows and as an Australian solo artist, it's a pretty cool thing to have that happen in your life," she says.

In September, after more than 50 shows in 2019, Sultana will perform at the stunning outdoor Red Rocks Amphitheatre in Colorado.

Tash Sultana plays at Hordern Pavilion, Sydney, on March 8 and 9 (both sold out) and March 10; and at Sidney Myer Music Bowl, Melbourne, on March 14, the Riverstage in Brisbane on March 21 and Fremantle Oval in Western Australia on March 30.