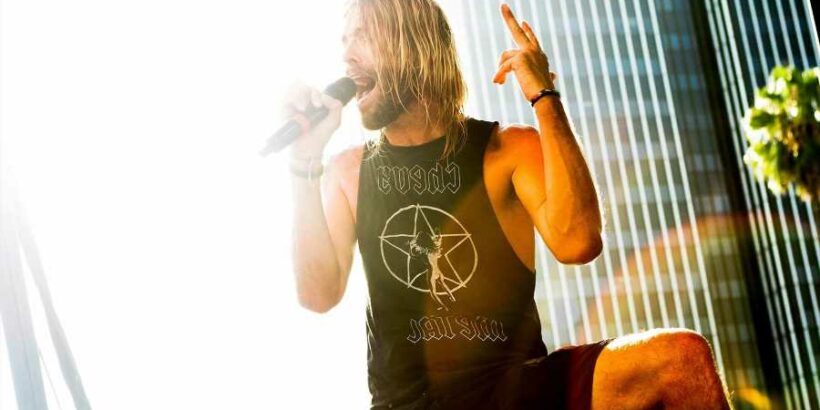 In a 2021 interview, Dave Grohl reflected on the first time he met Taylor Hawkins. “We were at some radio show backstage, and he came up with a beer in his hand,” Grohl recalled. “He’s like, ‘Hey, man, what’s up? I’m Taylor, I play with Alanis Morissette. Dude, I love your record, it’s so cool!’ He was such a spaz. I was like, ‘Wow, you’re either my twin or my spirit animal, or my best friend!’ In the first 10 seconds of meeting him.” Those 10 seconds would turn into more than 25 years of brotherhood and rock stardom, as the pair went on to thrill huge crowds all over the world with the Foo Fighters.

As much as Grohl was always the band’s leader, Hawkins was its heart and soul, projecting just as much charisma in his frequent vocal cameos as he did with his powerhouse drumming, and embodying the Foos’ evangelical belief in the transformative power of rock. He adored his gig and seemed eternally grateful for it: “I fuckin’ love Dave Grohl,” Hawkins told the crowd at Lollapalooza Argentina just days before his tragic death. “I’d be delivering pizzas if it wasn’t for Dave Grohl.” Whenever the Foos weren’t active, Hawkins brought his everyman humility and infectious passion into other creative outlets, from goofy side projects like the “70s dirt rock cover band” Chevy Metal to more serious affairs like his new supergroup NHC with Dave Navarro and Chis Chaney. Here’s a look at some of Hawkins’ most memorable performances from his long career in rock.

Hawkins’ first high-profile gig wasn’t with the Foos; it was with Alanis Morissette. Like Morissette, Hawkins at the time was a twentysomething still figuring it all out, embarking on an 18-month tour as 1995’s Jagged Little Pill turned into a gargantuan success. This Letterman performance shows the infectious, hair-flailing enthusiasm Hawkins brought to all of his performances, a perfect complement to Morissette’s intensity. “She gave me a lot of space to do what I wanted,” Hawkins recalled of Morissette, whom he played with until joining the Foos in 1997. “It was probably the biggest album of the year, and there was a lot of pressure on her. She was having to learn to be this leader on the job, which isn’t easy. But it was really one of the most fun times of my life.” —C.H.

Powering the Foos Through “Monkey Wrench” (1997)

Grohl liked to joke that if they ever made a Foo Fighters movie, he’d want to be played by Christopher Walken. He knew what the dramatic turning point in the film would be, too: “You can just imagine what it would sound like,” he told Rolling Stone in 1997, doing a passable Walken impression. “Me making the call to Taylor to join the band: ‘We need a drummer real bad.’” You can see the instant impact Hawkins’ arrival made on the Foos in this Later… With Jools Holland performance from that same year. A short-haired, clean-shaven, 25-year-old Hawkins is already an unstoppable dynamo, fully dialed-in to the song and giving the Foos the rhythmic engine they needed to blast off into greatness. —S.V.L.

Six months after Led Zeppelin’s stunning reunion at the O2, Dave Grohl reunited half of the band (guitarist Jimmy Page and bassist John Paul Jones) for an ad-hoc one-off at Wembley Stadium. With Grohl filling in for the late John Bonham on drums and Robert Plant absent, Taylor Hawkins mustered his best Golden God for a searing rendition of “Rock and Roll.” Where many singers lose their upper range as they enter their thirties, Hawkins (then age 36) hit Plant’s highest high notes effortlessly. “We played ‘Rock and Roll’ with Taylor on turbocharged vocals and Dave on drums and then for ‘Ramble On,’ they swapped, with Taylor on drums and Dave Grohl on vocals,” Page wrote on Instagram following Hawkins’ death. “We put in some serious versions of these two songs. It was so good to play with him. I really admired him and he was a brilliant musician: his technique, his energy and spirited enthusiasm.” —K.G.

On the night he helped induct Rush into the Rock & Roll Hall of Fame in 2013, Taylor Hawkins offered two beautiful tributes to one of his drumming heroes. The first came during his speech. “Fuckin’ Neil Peart … come on!” he enthused. “This guy spawned a generation of air drummers for decades to come. With his composition, craft, and technique, his drumming was songwriting. It just as musical, just as melodic as any other instrument in the band, bringing the drums where they fuckin’ should be: to the forefront of every song.” The second, more spectacular homage arrived when he took the stage in full 1976 garb (a poufy wig and a flowy kimono) to perform a flawless cover of the raging instrumental overture to Rush’s high-prog landmark 2112 along with Dave Grohl on guitar and Nick Raskulinecz — who produced records for both Foo Fighters and Rush — on bass. The coolest part is when the actual members of Rush emerge alongside their doppelgängers to break into “Tom Sawyer.” This clip perfectly sums up the way Hawkins always seemed like the purest embodiment of every young rock fan who got the chance to live out their adolescent dreams every night onstage — and who never failed to kick ass while doing so. —H.S.

Helping to Send Letterman Off in Style (2015)

When David Letterman returned to his CBS late-night show after undergoing open-heart surgery in 2000, he knew which band he wanted to be there. “What about Foo Fighters?” he recalled telling producer Sheila Rogers. “She said, ‘Well, I’ll ask them.’” As he recalled it, the Foos then canceled a tour just so they could come back to New York and play “Everlong” at his request — that’s the kind of stand-up guys they all were. Fifteen years later, when Letterman retired from the Late Show, he made the same request for his final musical guest, and the Foos once again answered the call. Hawkins was there in dapper black-tie, slamming away on “Everlong” and rising to the occasion, making Letterman’s last CBS show feel like a memorable milestone in rock & roll as much as late-night TV. “God bless you, gentlemen,” Letterman said. “Thank you, and good night.” —S.V.L.

“Stay With Me” is a quintessential rock & roll song, and with his hyperactive drumming, deep sense of groove, and raspy voice, Taylor Hawkins, a perpetual student of the rock canon, was the ideal conduit for revamping the Faces’ classic track onstage. The Foo Fighters covered the song numerous times at festivals and concerts, often bringing out special guests — like Eagles of Death Metal guitarist Dave Catching in the version above at the 2015 Rock am Ring in Germany — for a larger scale rock ensemble jam session. But no matter who came out to play with the Foos when they’d roll out “Stay With Me,” this was always Hawkins’. —E.M.

Hawkins was rock’s greatest superfan, and his unabashed love for the genre went way beyond the core classic-rock cannon. Take his 2016 performance with his side project the Coattail Riders, where he covered Night Ranger’s “Sister Christian” — the “Stairway to Heaven” of hair metal. Hawkins even brought Red Hot Chili Peppers drummer Chad Smith onstage, telling the crowd, “He’s one of the greatest of all time, there’s no question. I used to sit behind him when the Foo Fighters toured with the Chili Peppers back in ‘99. Me and Dave would just be like, ‘Oh my fucking god, he’s so gnarly.’” Smith manned the keyboard in shades while Hawkins sat on the drum kit, singing and playing Kelly Keagy’s parts as he delivered the power ballad. Night Ranger paid tribute to Hawkins following the news of his death, writing, “We always got a kick seeing Taylor cover ‘Sister Christian. Our thoughts are with his family and friends. Heaven just got a little louder.” —A.M.

Taylor Hawkins saw his many side projects as a chance to have an absurd amount of fun and live out his childhood rock-star fantasies. That was certainly the impetus for the formation of Chevy Metal, a group he started with his longtime friends Wiley Hodgden and Mick Murphy. In the words of the band, they were a “70s dirt-rock cover band” that focused on the music of Black Sabbath, Van Halen, and Queen. Check out this video from their May 4, 2019 set at the Beachlife Fest where they did a set of strictly Van Halen covers from the David Lee Roth era. Hawkins spends the set going back and forth between the drums and the front of the stage as he belts out classics like “Hot for Teacher,” “Panama,” and “Mean Streets.” He loved his time in the Foos, but he also lived for nights like this. —A.G.

Taylor Hawkins’ effortless vocal turns on Queen’s “Somebody to Love” (one of Freddie Mercury’s most challenging vocal performances) were one of the most talked-about parts of Foo Fighters tours in recent years. When the band played Madison Square Garden in June 2021, just a few months after people started getting Covid vaccines and could start gathering together again, he insisted on performing the song as his young son, Shane, looked on. “Fuckin’ Madison Square Garden,” he said beforehand. “A year ago, I did not see this.” With Grohl behind the drum kit, Hawkins performed acrobatic feats of vocal dexterity as he hit every impassioned high note, every yearning low note. Watching the band build the song back up after its quiet part — “I need somebody to love” — was emotional then, as a declaration of freedom from the clutches of the Covid pandemic, and it’s emotional now, seeing Hawkins’ getting swept away by the song. —K.G.

Taylor Hawkins loved everything about being part of the Foo Fighters, even if his role in the songwriting process was somewhat limited. “Foo Fighters is very much Dave’s band,” Hawkins told Rolling Stone in late 2021. “A lot of times, when we make a Foo Fighters record, Dave has demos that are pretty close to what he wants to hear. We just go in and fill in the blanks.” That’s why Hawkins devoted so much of his time to outside projects when the Foos were inactive. The most recent one was his “Yacht Goth Supergroup” NHC that he formed with Dave Navarro and bassist Chris Chaney during the pandemic. Their debut LP has yet to be released, but they shared a handful of songs like “Feed the Cruel” late last year, and even played a couple of West Coast shows. An American tour was in the works for this year, and Hawkins had big ideas for it that will sadly never be realized. “I kind of imagine our live show being somewhere between Rush and the Faces,” he told Rolling Stone. “I want there to be a looseness, a party vibe. My attitude is, ‘If you’re here, get up on the stage and play with us.’ Let’s just say America is there. We have no problem getting them up there and playing ‘Ventura Highway.’ America, if you’re around, join the gang.” —A.G.