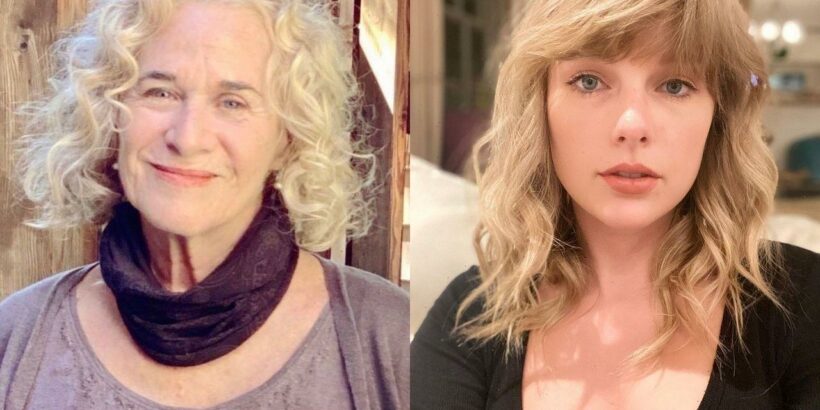 The ‘Wildest Dreams’ singer is overwhelmed with emotions as she helps celebrate the ‘You’ve Got a Friend’ star at the Rock and Roll Hall of Fame induction ceremony.

AceShowbiz –Taylor Swift was “moved and honoured” to induct Carole King into the Rock & Roll Hall of Fame on Saturday night (30Oct21).

The “Love Story” singer paid tribute to the songwriting icon with a rendition of her “Will You Still Love Me Tomorrow?” after delivering an emotional speech to salute King, who became the third female artist in history to be inducted into the Hall of Fame twice.

“I grew up dancing around the living room in socked feet to the sounds of Carole’s soulful voice, her infectious melodies and lyrics that I, a seven-year-old, thought had been crafted for my exact, specific life experience,” Taylor said. “I listen to Carole’s music now and feel that same tingle of recognition.”

“Her songs speak to the true and honest feelings that everyone has felt, is currently feeling, or hopes to feel one day. So it is only right for them to be passed down like precious heirlooms from parents to children, older siblings to younger, lovers to each other.”

“She is an immensely generous artist in every sense of that term. She has given us all so much. And that’s why I’m moved and honoured to be here this evening to give something back to her. Carole, please accept your well-deserved place in the Rock and Roll Hall of Fame.”

Jennifer Hudson also performed as part of Carole’s induction before the legendary singer-songwriter took the stage herself with a performance of “You’ve Got a Friend in Me”.

Meanwhile, LL Cool J was joined on stage by both Eminem and Jennifer Lopez after Dr. Dre presented him with the Hall of Fame’s Musical Excellence Award. Eminem was a big surprise when he walked out on stage and shared a furious performance of “Rock the Bells” with the honouree, and Jennifer joined the rapper for a rendition of their 2003 single, “All I Have”, before LL closed out his set with “Mama Said Knock You Out”.