When the Teskey Brothers finished playing before a packed house at the Forum late on Saturday night, Josh Teskey asked everyone to wait a moment so a mate could get up on stage and take some photos of the band with the crowd behind, ‘‘just in case this never happens again’’. 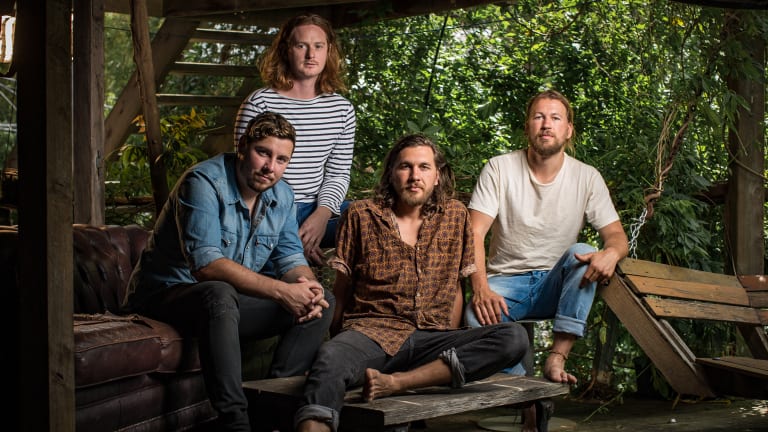 The Teskey Brothers in Warrandyte.

It probably will, but you can understand why lead singer Josh, lead guitarist Sam Teskey, bass player Brendon Love and drummer Liam Gough might wonder.

A little over a year ago they were not much more than a hard working pub band that had been playing together for more than a decade and cutting tracks on an ancient 24-track tape machine in the basement of the Teskey brothers’ Warrandyte home.

Then they released Half Mile Harvest, an album that uncannily channels the analogue sound of '60s American blues and soul. It turned the Teskeys into an overnight, 10-year-in-waiting sensation.

Saturday’s set was grounded by songs from Half Mile Harvest including Crying Shame, Pain and Misery, Reason Why and Shiny Moon, and they gave many of the fans in the Forum what they came for: Josh’s classic velvet gravel voice, Sam’s liquid retro lead guitar licks, and the solid blues engine of Brendon Love’s bass and Liam Gough’s drums. On the side, Olaf Scott on sumptuous Hammond organ, Nathaniel Sametz (Trombone) and Charlie Woods (Trumpet) filled out the sound.

Half Mile Harvest’s upbeat 12-bar Louisa also got an outing, as did what Josh calls the band’s psychedelic excursion, Honeymoon. It was leaner, harder and better on stage than on the record.

However it was the new tracks that will probably decide how they build from the Forum show, the biggest they have done so far.

After catapulting to attention here and overseas last year, the Teskeys might have a choice. Do they keep doing what they’ve done, and secure what will almost certainly be a loyal but niche following here and overseas, including the US, where they are now headed? Or do they see where else their shared strong songwriting skills and Josh’s classic blues-soul voice in particular can take them?

The sense on Saturday night was that they are conscious of what got them to the Forum in the first place, but willing to see whether there is an appetite for a wider range from them.

New songs including Man of the Universe and the band’s next single, I Get Up, were a little less bluesy, a bit less trad — still good, but a little more mainstream: if they don’t work as well, the Half Mile Harvest recipe is still going to be in demand.