It’s a humid evening in late May when singer-guitarist Emir Mohsseni takes the stage at New York’s Mercury Lounge. He and his Brooklyn-based group, the Muckers, are opening for Mexico City’s Rey Pila, and as the Thursday night crowd shuffles in, several seem impressed by the danceable psych-rock coming from onstage. In between songs, a sweaty, beaming Mohsseni tells the crowd that playing the Mercury Lounge is a dream come true. Few in attendance know how seriously he means it.

Just two years ago, Mohsseni was 6,200 miles away in Tehran, his dream of making it big as a musician in America seemingly out of reach. He had some experience leading a band, but the local authorities’ harsh view of rock music meant that he was risking jail or worse with every clandestine house show. “There was always danger and pressure,” says Mohsseni, 29. “We were once scheduled to play two nights at a spot, and after the first night the promoter told us the cops had come and warned that if we played the second show we would be arrested.”

The tale of Mohsseni’s journey from Tehran to New York is a story of sacrifice, conviction and persistence against huge odds. This fall, the Muckers released their debut EP, It’s Better Without You, a record that shimmers with fire and possibility. It took Emir Mohsseni years to get here, these songs seem to proclaim, and he’ll be damned if he’s going to squander his opportunity.

The moment Mohsseni saw The Strokes’ “Last Nite” video on TV at the age of 13, he knew what he was going to do with his life. The fact that he was born in Iran, where the conservative clerical elite frowns on Western culture, didn’t stop him. His parents bought him a Gretsch Electromatic, the one he still plays today, and he went to work.

“My parents love music, and I’d been listening to their records from the ’60s, ’70s and ’80s since I was a kid — anything I could get my hands on,” he says. “When I saw The Strokes, it just clicked. This is what I want to do. My parents were so supportive and let me set up a practice space up in my room. I was playing all the time. Sometimes my mom would come in and say, ‘Can you play me this on guitar?’ and have me play some of her favorite rock songs. We still do that over the phone now.”

In 2009, Mohsseni emerged from the two years of military service required by Iran to apply for a visa. He started searching for musical compatriots — a difficult task in Iran — and began looking into what it would take to get him to the States. Over the next three to four years, he found enough comrades to start up an early version of the Muckers that played some secret shows, but always under the ever-present threat of retribution. Risking so much to share his music with so few left him feeling unfulfilled and frustrated.

“Playing shows in Iran was pointless to me,” Mohsseni says. “I know people want to have fun there, and I wanted to have fun and play great shows for them, but I wanted something more, you know?” His voice begins to rise with emotion as he continues: “I don’t belong to that place and don’t understand or agree with anything there. I always felt like I was born in the wrong place.”

Sitting at a dimly lit Brooklyn bar the day after the Mercury Lounge show, Mohsseni resembles a young Strokes guitarist Albert Hammond Jr. with his unique sense of vintage style and halo of hair. He has an effortless charisma and he’s quick with a smile, but a bit of light goes out of his eyes when he discusses how hard it was to get to the U.S. “My friends were trying to be supportive and tell me, ‘It’ll be all right, things will be fine,’” he recalls. “And I just said, ‘No man, I need to leave. These places we play here are not for me. I want to play the Mercury Lounge.’”

So Mohsseni kept the faith, listening to as much music as he could find online via peer-to-peer bittorrent downloads. “Growing up, I’d always loved Michael Jackson, and I revisited that and really started studying black culture, checking out funk music — James Brown, Earth, Wind & Fire, Fela,” he says. “All these legends. I was obsessed with that for a while, and it made me think I need to try and make something with that. Something special in between that and rock.”

By his mid-twenties, Mohsseni began to develop what is now the Muckers’ signature sound, a kind of rock that lives and breathes and snarls. The songs are hard-charging one moment and drenched in psychedelia the next. Lyrically, most of them share a common theme: escape.

“I wrote these songs two or three years ago, so all of them are about waiting too long for something that means everything to you and the frustration of that,” he says. “People don’t make rock & roll music to dance right now. That soul, that makes you feel groovy and dance — like Bowie’s Station to Station. When you’re listening to ‘Golden Years’ — man, I want to dance every damn time I hear that song!”

Mohsseni’s research into how he could get to the U.S. led him to Boise, Idaho’s Treefort Music Festival and its co-founder Eric Gilbert, who became the young Iranian’s advocate in the States, communicating with him often and even meeting with immigration lawyers on his behalf in New York City. “It was tough,” Gilbert says. “I mean, you’ve got a certain human screaming and yelling on the campaign trail about the borders being wide open and people just pouring in, and meanwhile I can’t even get a fucking band in the country! Emir loves the opportunity that being an American presents, and he sees it more than those of us who were born into it. It makes me proud to be an American and reminds me of who we are supposed to be.”

By late 2016, Mohsseni had all but completed the complex process of acquiring a visa through the republic of Georgia’s embassy (there is no U.S. embassy in Iran). Then Donald Trump was elected. While Mohsseni was awaiting final clearance on his visa in January 2017, Trump’s travel ban on people from seven majority-Muslim nations — including Iran — took effect, seemingly ending his lifelong dream. During this time, a disillusioned Mohsseni met future Muckers bassist Anthony Azar, an Iranian-American musician who was visiting Tehran. Concerned for his new friend, Azar floated the idea of Mohsseni’s traveling to Canada and trying to figure things out from there. “Fuck no! I’m coming to New York,” was Mohsseni’s adamant response. 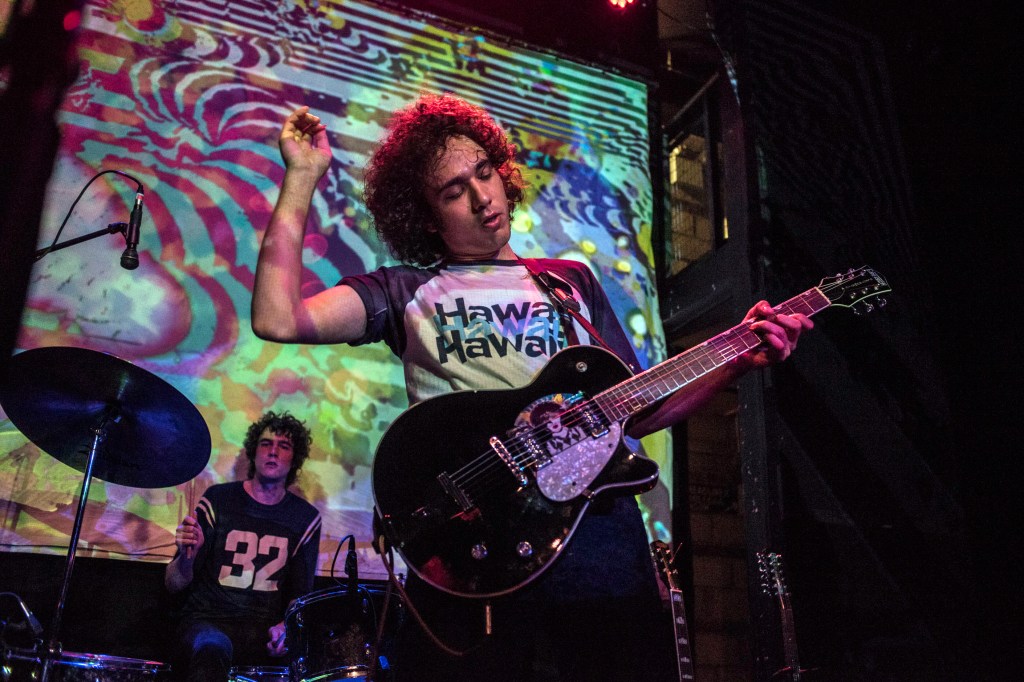 The Muckers perform at Rough Trade in Brooklyn, in July.
Photograph by Sacha Lecca

“He applied for the visa during the Obama administration and had been trying for years, so we figured he’d get in,” Azar says. “We had no idea how hard it would be. So many others gave up, but not Emir.”

When the travel ban was challenged in court, Mohsseni and his supporters sprang into action, determined to take advantage of their small window of opportunity. Promoter Dave Dart, whose Austin-based Dart Music International specializes in helping international artists get into the States, was able to enlist the mayor of Austin, Steve Adler, to vouch for Mohsseni’s musical abilities and the dangers of playing his brand of music in Iran in a letter. Finally, on March 16th of last year, on the very day Maryland Federal District Judge Theodore Chuang blocked the part of the travel ban that applied to travelers like him, Mohsseni arrived in New York City. “As I was walking through JFK [Airport], there were some protesters,” he says, smiling as he thinks of that day. “I was overjoyed when I saw the exit doors open. All I could think was, ‘Run!’”

Mohsseni’s years of bureaucratic struggles had given him time to formulate a plan and to study the New York City music scene as if he were already there and not thousands of miles away. When he got there, he hit the ground running. In a matter of months he formed an early lineup of the Muckers with Azar and started playing shows, the first of which was poetically scheduled for Fourth of July weekend.

As he traversed the NYC rock scene, Mohsseni began to make a name for himself as a talented newcomer. After being blown away when they both appeared on a bill at NYC club Berlin in early September 2017, drummer John Zimmerman sent Mohsseni a message on Instagram telling him how much he’d dug the Muckers’ set. The singer and guitarist thanked him, said he’d been similarly impressed with Zimmerman and asked him to join the band. “I said I was interested and he just went, ‘Cool. Practice is Monday,’” Zimmerman says. “It was like ‘Well, I guess I’m in the band now.”

In conversation, Zimmerman is quiet and unassuming, but when locked in with Mohsseni onstage he becomes a chaotic blur that typifies the ecstatic passion that defines The Muckers. “He wants it more than anyone I’ve ever played with, which is so inspiring,” the drummer says.  “He’s so determined to make this happen that it makes you want to help him.”

“It seemed overnight [Mohsseni] had so many friends,” says guitarist Chris Cawley, who provided the essential final piece of the Muckers puzzle when he joined the band in April of this year. “When he got to New York, he had everything mapped out. It was like, ‘I have a formula and now I’m gonna follow it.’ And he did, and it worked! He knew all the venues to go to, he knew all the bands to follow.”

Unleashed in a live setting and backed by musicians he trusts, Mohsseni’s guitar playing feels like it’s exorcising years of pent-up frustration. Within his songs, you can hear both his years of repression and the joy of his newfound freedom. It’s a call to fans to kick the dust off of their souls and boogie. “He comes with this energy — some kind of transcendental Buddha thing, where he’s this beacon of light and love, but you can also tell that the dude doesn’t mess around,” Cawley says. “The Muckers have had a quicker trajectory than any band I’ve ever been in, and that’s because of the music. He would never say something like this, but he really is this Brian Wilson or James Brown type where he hears and feels everything as it’s happening.”

What Mohsseni wants most, he says, is for people to wake up and remember they’re alive. He wants people who hear the Muckers’ music to understand that it’s worth fighting with everything you have for a better life — to realize that great beauty and freedom are still possible in America, no matter who is in the White House. “I get a lot of messages from back in Iran saying ‘Emir, you did it,’ but we’ve just started,” he says. “It’s cliche, but I want a kid in Iran — or anywhere else — to know if you’re going to do something, you have to do it. I want to give them hope, and this place, New York City, America, it should still give people hope too.”