Mie Nakazawa​ thinks that the greatest nights don't just imprint themselves in our consciousness. They can leave palpable marks. The artist and musician, along with her sister Claire and Beatrice Lewis, is part of Haiku Hands, a fast-rising collective whose sonic universe, if you were game enough to describe it, melds hip-hop swagger and the white-hot energy of electronic music with something punkish and unclassifiable. Two nights ago, the group staged their second-ever headline show: a raucous warehouse party in an undisclosed location in Sydney's inner west. Mie is still in recovery.

"I have bruises from dancing and moving equipment," deadpans Mie, who's wearing a boxy cotton T-shirt stamped with a colourful logo. "The crowd was shouting, and you could see sparkles in their eyes!" 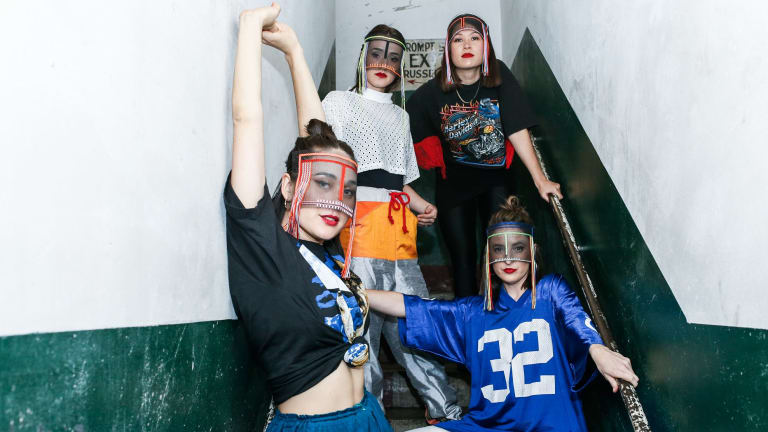 "I was like, who are all these people?" Claire, who is also a visual artist and is slightly more soft-spoken, chimes in.

"A friend said to me that performing should be about making memories," says Lewis, flashing her bandmates a megawatt grin. "It's about creating a physical feeling." 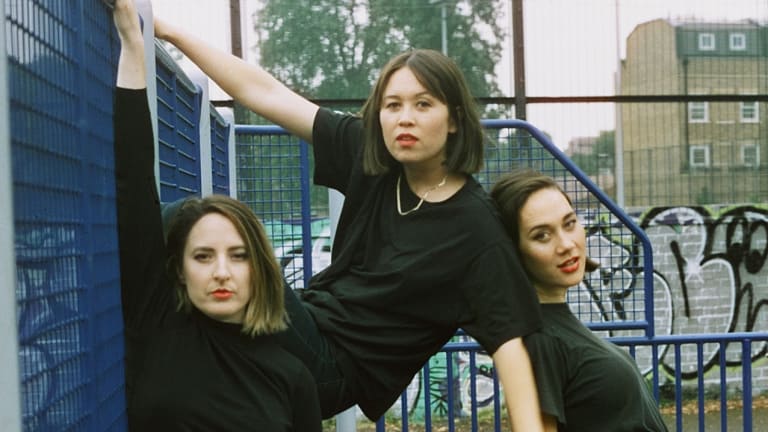 It's a cloudy Monday afternoon and we are gathered around a large, wooden table at the Nakazawas, a sprawling terrace in the suburban backstreets of Marrickville. When I arrive, the trio are laughing over cups of tea and Claire makes me a hot chocolate. It's clear their sisterly camaraderie extends to everyone in their orbit. There are laptops strewn around the kitchen. The Nakazawas' artworks, a geometric landscape done in Day-Glo colours (Claire's) and an intricate etching of a face (Mie's), bookend the room.

In the past 12 months, Haiku Hands, who are about to embark on a tour around Europe, have played more than 60 live shows. Their performances – which could see the group, at any given moment, rap freestyle, bounce in unison or march on stage wearing matching white boiler suits – are high-octane affairs that blend art, music and choreography. They are events during which dancing isn't just mandatory; it seems like the best and only response to this grim cultural moment. This year, NME described Haiku Hands as "a thrilling pop hybrid" in the vein of the Beastie Boys and "Australia's most electrifying pop prospect". Claire puts it another way: "Haiku Hands is a creative playground that lets us explore different mediums. All the creative mediums. Everything!"

The Nakazawas grew up in the Blue Mountains, the region that has given rise to hip-hop acts including Thundamentals and Hermitude. "Dad is an acupuncturist and Mum is a yoga teacher, so they had a lot to do with us being happy and free," recalls Claire, who also performs under the alias Chaos Emerald. The sisters honed their performing talents as long-time members of a live art game show that sees MCs, artists and DJs riff on each other's mediums – a freestyle rap battle in the spirit of Mr Squiggle – called Sketch the Rhyme.

Claire met Lewis, a Melbourne-based electronic producer and vocalist through a mutual friend, Joel Ma, or Joelistics, in 2013. The trailblazing MC, along with Hermitude's El Gusto (Angus Stuart) and Mataya Young, a jazz singer who performs with the group in Australia, would become part of a revolving crew of creators and collaborators.

"I was playing at a festival in Queensland and Claire was performing, and I thought 'who is that?' " says Lewis, who is also a part of Kardajala Kirridarra, a musical partnership with Indigenous musicians from the Malinja community in the Northern Territory. "I was so shocked to see this powerhouse woman on stage."

In April 2015, the pair started writing with Ma. Their chemistry was instant.

"I resisted because in my head, I was a visual artist," says Mie. "I came to take the press shots but found myself doing the first show for fun and then the next one."

"There were all these components to the project," says Claire. "We were looking to Mie to bring her visual aesthetic."

Haiku Hands swear that they are pop culture novices. But in the tradition of artists such as Die Antwoord or Santigold, the group's musical ambitions are inseparable from this aesthetic sensibility. Haiku Hands' visual world emerged fully-formed from the outset, running thick and fast with references that wink at everything from the Riot Grrl movement and the absurdist humour of Rick and Morty to the neon-bright dress codes that ruled '90s raves.

Not About You, the group's acclaimed debut single, features rhymes such as "You look like a tortoise/ Your issues are enormous" over an addictive, four-on-the-floor bass line. In the video, the group perform outlandish, synchronised dance moves in open fields, dressed in pastel bathrobes and fluorescent ski suits. They use mirrors to catch each other's reflections, like superheroes deflecting each other's creative energy into the ether. In November 2017, Not About You became the soundtrack to a routine by Brian Friedman, a legendary LA choreographer who has worked with the likes of Beyonce. Suddenly, fans were dancing to Haiku Hands everywhere from Russia to India.

"The first time I played our music at the Red Bull Music Academy, everyone stood up and started dancing," Lewis says. "It was good to recognise that the sound was really international very early on."

These days, we might not agree on much. But for Haiku Hands, the dancefloor is where we might be able to strike a consensus with the people around us, find a moment of bodily freedom. It's an idea that is at the heart of their new single, Squat. The anthem, which was originally written by their friends, the hip-hop act True Vibenation, nods to genres such as dancehall and Afrobeats and is the sonic equivalent of a house party. Its genesis contains the band's worldview in miniature.

"We heard True Vibenation play and were like, 'that sounds like a Haiku Hands song!' " says Claire. "We all came back here, Mie gave them an artwork and they asked what they could do in exchange. We said: 'let us play Squat live!' One of our mottos is about realising how interdependent we are as a creative culture. Some things you can't do on your own." She smiles mischievously. "You have to do them together."

Haiku Hands plays alongside Bloc Party on November 29 and 30 at Sydney's Hordern Pavilion. They will play as a headline show at Oxford Art Factory on February 1.