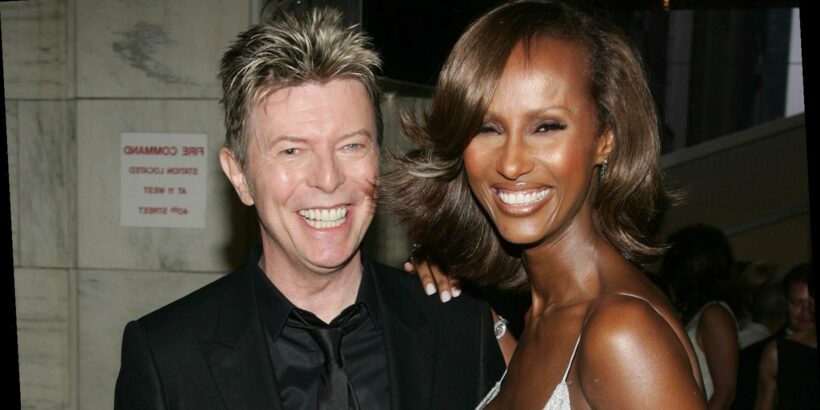 Onstage, David Bowie was Ziggy Stardust, sporting a flame-colored mullet, psychedelic satin jumpsuits, and gogo boots while singing surrealist rock n’ roll hits about life in outer space. Onscreen, he was a cult hero as an alien on a mission (in The Man Who Fell to Earth), the Goblin King (in Labyrinth), a mysterious FBI agent (in Twin Peaks: Fire Walk With Me), and pop artist Andy Warhol (in Basquiat). But to his wife, Iman, he was simply David Jones: the man he was born to be, and the man he was when the applause, bright lights, and blue eyeshadow faded.

Iman Abdulmajid was born to a Somali diplomat, attended school in Egypt, and studied political science in college, where she was noticed by a fashion photographer. She arrived in New York City in 1975 – a decade or so before the Golden Age of supermodels dawned — and became designer Yves Saint-Laurent’s “dream woman.”

When Iman and Bowie met, they each met their match in dramatic glamour. But what bonded the two lay beyond the glitz of their work, in the stability and simplicity of their love at home. “You would think that a rock star being married to a supermodel would be one of the greatest things in the world,” Bowie famously said (via Biography). “It is.”

They had both been married before

The iconic Ziggy Stardust persona grew not only from the creative mind of David Bowie himself, but also that of his first wife, Angie. The pair married in 1970, at the genesis of David’s career, and she encouraged him to embrace and capitalize on his queerness.

In 1973, when Iman was 18 years old, she married a Somali entrepreneur, hotelier, and fellow mononymous person Hassan, according to TooFab. The marriage ended two years later, shortly after Iman moved to the United States to pursue modeling. She then moved onto a decade-long marriage to basketball player Spencer Haywood from 1977 to 1987.

Angie Bowie blamed the deterioration of her marriage to David Bowie on his use of illicit substances. “As soon as we started to do well, David started to take drugs,” she told Evening Standard. In the wake of the divorce, at the dawn of the 1980s, Bowie’s professional life was thriving while his personal life was in shreds. After performing to thunderous applause from mega-crowds at night, he’d return to the empty silence of his hotel rooms. “David was very lonely,” Teddy Antolin, Bowie’s hairstylist and friend, told the Mirror. “It was so sad — all this hard work David did each day and then he was alone.”

Meeting Iman prompted Bowie to sober up. “He decided, ‘I met her, I’m changing my life, I’ve got to impress this woman and step up,'” Antolin said. “He did everything to change any kind of bad habits he had and it was remarkable because David never had a drink after that or anything.”

One night in 1990, David Bowie pulled up to Teddy Antolin’s dinner party in Los Angeles in a white Mustang, wearing head-to-toe white denim. Iman, who had recently retired from modeling, arrived at the same party in a black Mercedes, decked out in head-to-toe black leather. “I thought, ‘What could be more perfect?'” Antolin recalled to the Mirror.

With the intention to play Cupid, Antolin had invited Iman to the party and convinced Bowie to fly to L.A. for the occasion. He introduced the model to the musician, and sparks immediately flew. “[They] looked at each other and it was love at first sight, you could feel the electricity, something went off,” Antolin recalled. “They spent the night talking to each other like they had known each other forever. They were looking at each other like, ‘Now what, shall we skip dessert and go home?'” Bowie echoed Antolin’s observations to ET. “I found her intolerably sexy,” he said of his first impression of Iman.

He immediately started dreaming of marriage, but she was 'not ready'

By the time he met Iman, David Bowie was 43 years old, had been single for a decade, and knew exactly what he wanted. “My attraction to her was immediate and all-encompassing,” he told Hello! in 2000. “I couldn’t sleep for the excitement of our first date. That she would be my wife, in my head, was a done deal. I’d never gone after anything … with such passion in all my life. I just knew she was the one.”

The day after they met at dinner, he eagerly invited her out for afternoon tea — a move he later described as “corny” during an interview with ET. “He was so nervous, he just said ‘tea,'” Iman recalled. “He doesn’t drink tea! He never drinks tea. He had coffee.”

Iman’s second marriage had ended three years prior, and it took a couple of weeks for the then-35-year-old to consider committing to the rock legend. “I was not ready for a relationship,” she told The Guardian in 2014. “Definitely, I didn’t want to get into a relationship with somebody like him.” But it was Bowie’s “corny” moves that showed Iman the man beyond the rock n’ roll persona.

By 1990, David Bowie had released around 20 albums and starred in around 20 film and television roles. The pinnacle of his career, in its blur of androgyny and stardust, was largely behind him, and he set out to prove to Iman that he was ready for the stardust to settle. “His actions spoke louder [than words],” Iman said of Bowie during a 2011 interview with The Cut. “We were dating for two weeks and I was coming from Paris and I got to L.A. at the airport and the doors open to the plane and I come out and I see all these people taking a picture of somebody. And he was standing there, flowers in hand, no security … He didn’t care if anyone saw.”

A couple of years before David Bowie and Iman got married, a ring caught her eye in Florence, Italy, as she later recalled during an interview with ET. Before he proposed, Bowie flew to Florence to buy the ring, only to find that someone else had already bought it. He tracked down the buyer, paid him or her handsomely, and secured the ring. The first time he proposed to Iman, she turned him down because, according to the Mirror, she insisted they meet one another’s family first. Once that was taken care of, he whisked her off to Paris, France, and proposed to her on the banks of the River Seine. “It was sweet,” Iman said. “And, of course, I said yes.”

In keeping with the two proposals, Bowie and Iman had two weddings. The first was a civil ceremony in Switzerland on April 24, 1992, “with just a witness and an interpreter” in attendance (via Brides). In June of that year, the couple threw a second — and more extravagant — wedding celebration in Italy. In a 2013 interview for Interview magazine (via Entertainment Weekly), Iman told Naomi Campbell that one of her most “memorable moments” from her wedding was the pouring rain — a sign of good luck. “[People] said, ‘Oh, you shouldn’t complain, you’re going to be married for 50 years, it’s going to be happy,'” Iman recalled. “And they were right.”

They both had children from previous marriages, and they had one daughter together

David Bowie and Iman both became step-parents when they got married, per Express. Bowie to Zulekha, Iman’s daughter with Spencer Haywood, and Iman to Duncan, formerly named Zowie, Bowie’s son with his first wife, Angie.

On August 15, 2000, Bowie and Iman welcomed their first and only child together, Alexandria “Lexi” Jones. “I’m frighteningly happy,” Bowie told the New York Daily News in 2002. “I don’t see ever wanting to change things in my personal life. Iman and I are very happy, and we have the most fabulous baby.” In a 2013 interview with Naomi Campbell for Interview magazine (via Entertainment Weekly), Iman reflected on her and Bowie’s contrasting parenting styles. “David is measured, sensible yet at the same time fun and relaxed with Lexi,” she said. “I’m the disciplinarian!”

According to ELLE, Lexi is now an artist who sells her original cartoons and customized clothing online. In May 2020, The Sun reported that she had moved to Los Angeles to be near her half-brother, Duncan, who is a successful movie director — though Lexi stays out of the Hollywood scene. “She’s a great kid and very down-to-earth,” a source told the outlet. “Most of her friends are also studying art and they spend their time vintage shopping, going to exhibitions and hanging out by the beach.”

David Bowie called his marriage to Iman 'a joy'

Iman and David Bowie waited two years after meeting to get married, not because they weren’t sure they loved each other, but because they fell in love so quickly that they questioned their own judgment. “When I met Iman it was just so instantaneous. It was really one of those overnight things,” Bowie recalled during a 1996 interview with The Telegraph. “In fact, it was so overnight we knew we should wait a couple of years before we got married, to make sure we weren’t kidding ourselves. And fortunately we weren’t. It’s just been such a joy.”

After he married Iman, Bowie made it clear that his marriage meant more to him than his career did. “If there was a choice between one or the other there’s no question,” he told ET. As he grew older, he was often asked what he thought his greatest achievement was. “Marrying my wife,” he said when asked the question by a music writer in 1995 (via Metro). “That’s the most successful thing I ever did in my life.” When the writer clarified that he was referring to Bowie’s music career, the musician reportedly “scoffed” and said, “Nothing else counts.”

“My marriage is exactly as fabulous as you all would think,” Iman said during a 2010 appearance on The Nate Berkus Show (via Entertainment Weekly). “He’s fun, he’s a really very curious man, and so I really learn a lot from him.”

In a 2010 interview for Harper’s Bazaar, Iman said the lovebirds’ fighting dynamic was key to their marital success. “What attracted me to David [is that] he is a gentle soul … He is English, so he just stays quiet,” she said. “I’m the screamer. Then he always makes me laugh. It’s like cabaret. I keep him entertained too. I still fancy him — totally! — after all these years.” Their shared sense of humor keeps their marriage strong in spite of their differences. “He’s English, so of course he has a very witty sense of humor,” Iman told ET, “and basically we found each other at the right time of our lives.”

Iman has said she will 'never remarry' following Bowie's death

David Bowie died of cancer on January 11, 2016, at the age of 69. He had been married to Iman for 24 years by then. “I get the fans’ grief, but it’s not the same,” Iman said during a 2020 interview with Porter magazine. “They have lost someone they look up to; we have lost a husband and a father … And sometimes, I don’t want people to know how sad I am … I’m not strong – I am just trying to keep it together.”

Despite their “til death do us part” vow, Iman has made it clear her love for Bowie outlives even the man himself. “I will never remarry,” she told Porter. “I mentioned my husband the other day with someone, and they said to me: ‘You mean your late husband?’ I said, no, he is always going to be my husband … I do feel very lonely. But do I want a relationship? I can’t say never, but no, not now.”

Quoting Bowie’s song “Tonight” on Instagram in January 2016, Iman wrote, “I will love you til I die, I will see you in the sky.” In another post honoring Bowie after his death, she wrote, “My favorite love story is ours.”