It's after she's told a story about messaging an ex-girlfriend for information on selling her blood and mentioned that she's only just discovered that her accountant older brother has been surreptitiously filing her tax returns, that you realise that Liz Mitchell, the vocalist of Melbourne alternative guitar pop quartet Totally Mild, lives her life as an open book. And her rationale for it is simple.

"My songwriting is so confessional and intimate that I'm really bad at being guarded. I'm an over-sharer in all realms of my life and I don't know how to be protective, so I will just talk," Mitchell says. "What's the point of not talking about my life in interviews when all the songs are about my relationships and my mental health and stuff that is already there?" 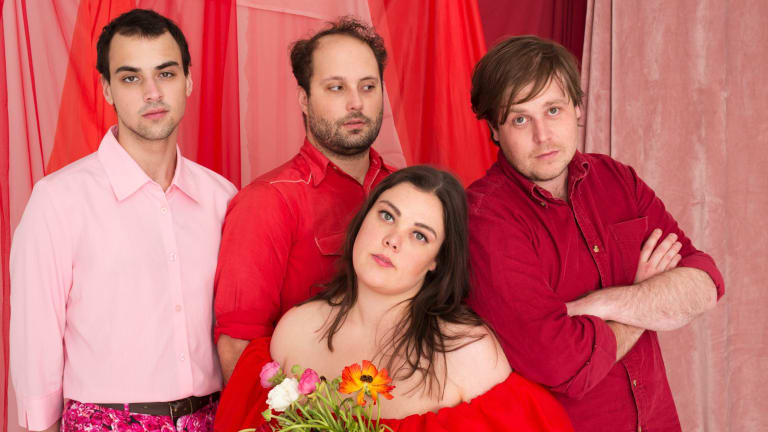 The 28-year-old is speaking from the New Zealand port town of Lyttelton, a locale familiar to fans of local singer-songwriter made good Marlon Williams, where Mitchell is working on a solo album. She's living in a tiny hillside cabin on her own and very much regretting reading the catching serial killers memoir Mindhunter, but will return to Australia for the national tour to promote the new Totally Mild album, Her.

"The album captured when a time when I had some things figured out: I was more stable than in my early twenties, I lived in a house that wasn't completely falling down, I wasn't drinking all the time," Mitchell says. "Things were kind of coming together, but they were also about to fall apart."

"Sometimes when you listen to a band that has a super-unified sound it might be because one person has all the ideas, but with us Lehman and Zach and I have been playing together in different iterations for eight years now," Mitchells says. "You develop this shorthand on where you want to take things – it's like a beautiful mind reading thing, even though we have very different taste."

"I know your body like my own," Mitchell sings on Down Together, and the songs circle around the intricacies and assurances of domesticity as Mitchell charts her reaction to marrying her wife and sharing personal space with a degree of insight that sweeps cliche aside.

"I feel like domestic habitation is a trap and also something that can allow you to flourish. It makes me feel really stable to be in a monogamous relationship with a daily routine, but then it can also make you feel claustrophobic," Mitchell says. "It's a very specific way of living where you can feel all of that in the same day."

Totally Mild play the Union Hotel, Newtown, on May 25, and Howler, Brunswick, on May 26.