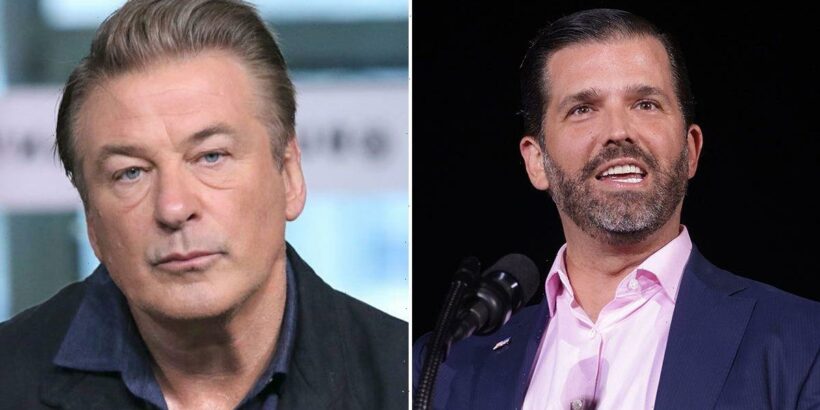 Donald Trump's son has been branded a "disgrace" for selling "sickening" t-shirts making a joke about Alec Baldwin following the fatal shooting on the actor's film, Rust.

He also shared a snap of the actor – who is known for impersonating former US president Donald Trump on Saturday Night Live – that had been edited to make it look like he was wearing the top.

The move has not gone down well, with people calling it "shameful" and accusing Trump Jr of trying to make money from a tragedy.

One posted a message on Twitter saying that the businessman had shown "zero decency or compassion", while another said it was "distasteful".

"Jr you are a low life mocking a tragedy… one young lady died and another one injured… you are disgraceful," said another.

"It is far beyond being flagrantly wrong and offensive behaviour," one outraged person posted, while another called Trump Jr "a disgrace".

"This is disgusting," said another, adding: "Profiting off of this woman's death is sickening."

Another outraged member of the public said it was "deplorable".

Trump Jr later responded to the backlash and tried to justify what he was doing.

"Screw all the sanctimony I'm seeing out there," he wrote on his Instagram Story. "If the shoe was on the other foot Alec Baldwin would literally be the first person p****** on everybody's grave trying to make a point. F*** him!"

The accident took place on the New Mexico set of the movie on October 21.

Alec later released a statement, which read: "There are no words to convey my shock and sadness regarding the tragic accident that took the life of Halyna Hutchins, a wife, mother and deeply admired colleague of ours.

"I'm fully cooperating with the police investigation to address how this tragedy occurred and I am in touch with her husband, offering my support to him and his family.

"My heart is broken for her husband, their son, and all who knew and loved Halyna."