Award-winning Melbourne-based singer and songwriter Missy Higgins, 34, owes much to her Sydney-based big sister, Nicola, 42, who set her on the path to success many years ago. Now she's returning the favour. 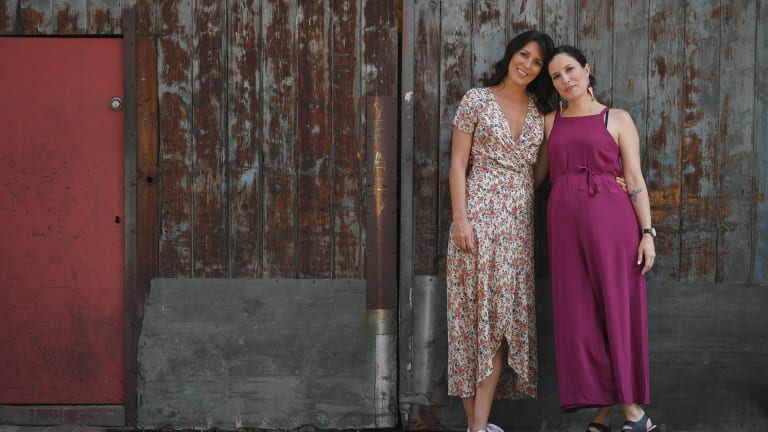 “We had one of those old VHS cameras and we’d make a stage and get her singing to Abba,” says Nicola (left).

MISSY: Nicola was always like another mum to me. She's eight years older, and used to wake me up in the morning, get me dressed and make my breakfast. If I was being naughty, she would grab my wrists and hold my hands down with one hand – so frustrating!

I don't think she was ever the cruel older sister, although apparently she used to dress up as a witch and come into my room, scare the shit out of me, make me cry, then go out of the room, take off the witch's outfit, then come back in as herself going, "Oh darling! What's the matter? Give me a cuddle, poor thing." So sick!

But she absolutely adored me. She would dress me up, do my make-up, like I was her little doll. She started doing photography in high school and used me as a model, so there are these really disturbing photos of me as a six-year-old with blue eyeshadow and red lipstick and a Madonna mole in a silk dress. Maybe it's the reason I ended up being a performer.

Nicola went away to boarding school when I was six. She used to write to me, and that was a really precious thing, these gorgeous little letters. She asked about my dog, Snowy, and what I did that day, and I used to write back. Getting a letter was the most exciting thing in the world.

In year 10 I recorded a song, All for Believing, for a school project, and Nicola was super-impressed. She rang me and said she'd send it to the Triple J Unearthed competition. Then I just forgot about it. But I won! And everything took off from there. The song got played on the radio, I got signed, and it was all thanks to her.

She'll completely deny it, but Nicola has a really good singing voice. We used to sing together around the house. There's nothing like harmonising with your siblings, because the resonance in your voice is so similar. I remember thinking we should make a band one day – we could call it the Higgles.

Nicola's a strong woman, a single mum with two boys, now studying art full-time in a city where she doesn't have help from grandparents around the corner. I don't know how she keeps it all together, but she's so committed. She was in fashion and retail for a long time, and so for many years art was an ember burning inside her. She's back following her passion now, which I really admire.

I've always been in awe of Nicola. She was the older, wiser, taller, more beautiful sister. Always the one that had guys falling at her feet. So stylish and fashionable. Brown from the solarium. This exotic creature. But she was also crazy.

Nicola went through a stage of getting naked in clubs – all of a sudden she would take off her dress in the middle of the floor and keep dancing. She's the kind of person who will say something at a party to watch everyone's mouths drop – she loves that. She loves shock humour, the absurdity of the moment. I guess in her own way she loves performing, too.

NICOLA: When Missy came along, that was the perfect thing for me. I was so excited. She was the cutest, funniest little baby, and she was really cheeky and a tomboy. She refused to wear skirts or dresses from the age of three. I remember going to pick her up from day care once and she was wearing army clothes and running around with a gun, chasing the boys, trying to kill them.

But mainly she was this little thing I could play with. I'd dress her up in full '80s clothes and shove a little microphone in her hand. We had one of those old VHS cameras and we'd make a stage and get her singing to Abba. She loved it. She loved attention. We all doted on her

I think our relationship changed a little when Missy was 12. Mum took me aside and said, "Missy doesn't want you to treat her like a baby anymore." It made me see her in a whole different light. I thought, "Okay, maybe she's an equal and maybe I can be friends with her."

I remember we'd never had a fight, but one time when she was in her early 20s we happened to like the same boy. And she got him. I rang her up one night and got so angry with her over the phone. Missy was devastated. A couple of days later we made up and all was forgotten. And then I went to one of her concerts and during the show she said that she'd just written a song and it was about someone in the audience, then she played The Special Two – an apology to me. I just stood there crying.

Recently Missy was on Q&A and she spoke so eloquently, but her social awareness started at a young age. She was involved in every charity and cause. She'd do the 40 Hour Famine. She'd give money and food to homeless people. Every time we left a tap on she'd yell out, "Don't be a Wally with water!" Missy's always felt the weight of the world on her shoulders.

For some reason, I stopped doing art for about 10 or 15 years. Then a few years ago Missy gave me a huge blank canvas for a present. I think it was a bit of a hint – nudge, nudge – and it made me think about painting again. I started a bachelor of fine arts last year. It's a big step, to make it my career. Missy helped me find the path.

I'll always feel close to her, even if we don't chat every day. Whenever I see her we just fall back into feeling super-comfortable. She's a natural parent – the earth mother – [Missy has a son with her playwright husband Dan Lee, and is pregnant with their second child] and a great aunty. She has this goofy sense of humour and can be dry, too, and she doesn't have any hang-ups or inhibitions, so she can be crazy but have a calming, quiet effect. I just like being around her – my cute baby sister.