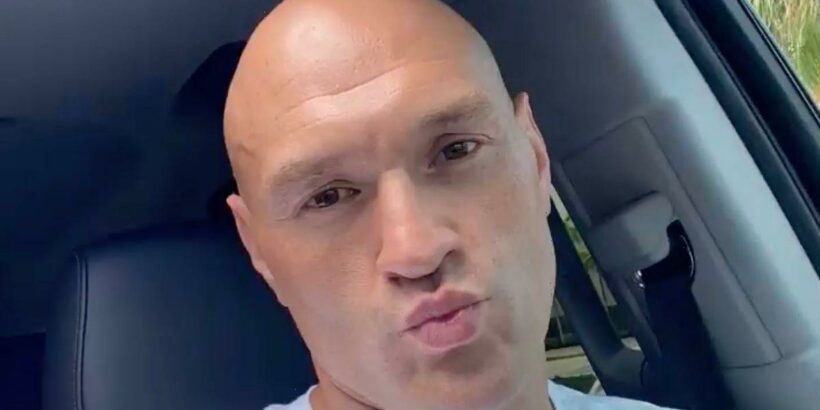 Boxer Tyson Fury has admitted he’s in his wife’s bad books after letting bikini-clad babes smother him in sun-cream on a Miami break.

The WBC heavyweight champion landed himself in hot water with long-term partner Paris after being papped having his biceps smothered in sun protection by the sexy girls as they frolicked poolside.

And that led to Paris posting a photo on Instagram in which she covered her wedding ring finger with a tree emoji, hinting she was angry with her husband for his embarrassing antics.

She also posted a photo of her left hand with no wedding ring on as she had her nails manicured.

It appears that Paris, who is pregnant with the couple's sixth child, had slipped off her wedding ring before getting a new set of nails done.

Tyson took to social media himself and added fuel to the rumour fire that the pair were at loggerheads and said: "Looks like the GK is in Mrs Paris Fury's bad books!"

"Wedding ring off," he added alongside the T2 tune, Heartbroken.

The 32-year-old boxer has been married to Paris since 2008 and the couple have five kids.

But in another social media post Tyson then debunked the rumours as he showered his wife with praise alongside a throwback snap of Paris smiling as she perched next to a luxury Laboutin bag.

"There's my Girl. @parisfury1 my Rock, my ride or die. god has blessed us abundantly. from the summer beneath the trees 2006," he penned.

However, the famous boxer shot down any hint of wrongdoing by writing: "I took a thousand pics yesterday at Fountain Blue but they only show the girls, haha."

Tyson has been in Miami with his brother Tommy, the former Love Island star.

Tommy, who is loved-up with fellow Love Island star Molly-Mae Hague, looked disinterested in the photos, glancing at his mobile phone as his brother – quite literally – soaked up the attention Stateside.

Reflecting on his relationship with Paris, Tyson admitted in his book Behind the Mask, that being someone for a long time “isn’t always easy”.

He admitted: “It’s not been easy, but Paris understands me and I understand her and what I think is this – all men are the same.

“We’re all a***holes anyway so you're better off with the devil you know than the one you don’t.”

He added: "Everyone has good and bad points, everyone argues and gets upset for nothing some days, but the good times outweigh the bad so we crack on with it. It’s called marriage.”

Tyson is due to fight fellow heavyweight champion Anthony Joshua on 14th August in one of the biggest bouts in boxing history.

The pair will fight for all four heavyweight belts for the first time in history in Saudi Arabia.

"All eyes of the world will be on the Kingdom of Saudi Arabia,” Tyson revealed on Instagram.

"I cannot wait, repeat, cannot wait to smash Anthony Joshua on the biggest stage of all time. “This is going to be the biggest sporting event ever to grace the planet Earth. Do not miss it. All eyes on us. See you all in Saudi."