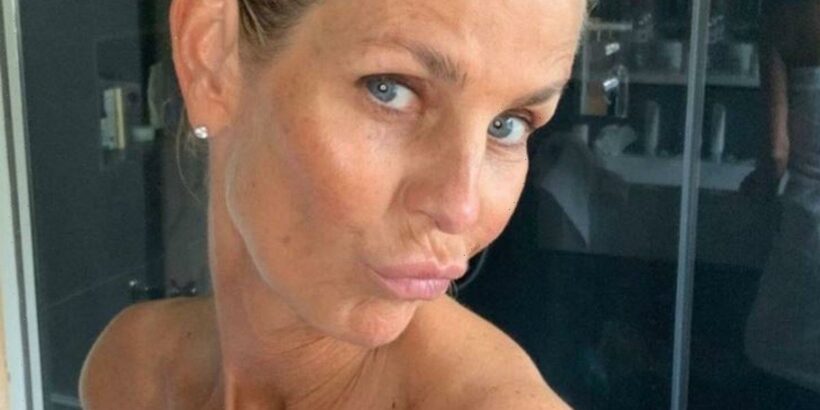 It's fair to say Ulrika Jonsson celebrated her 55th birthday in sizzling style.

The Swedish TV star decided to dazzle the internet when she shared a sultry topless snap to Instagram on Tuesday (August 16).

The moody black and white photo showed the mum-of-four lying back in bed and looking up at the camera with a sultry stare.

Ulrika oozed glamour as she covered up her chest in the cheeky bedroom snap, showing off her gorgeous floral arm tattoos and chic necklaces.

In another shot, Ulrika decided to show off her wild side by sticking her middle finger up at the camera.

A third saw the TV star pouting on her pillow, whilst a fourth saw her proudly presenting some freshly baked bread.

Captioning her stunning slew of birthday snaps, Ulrika told fans she was "filthy", "impatient" and wants to be loved.

She also revealed she is "carving out a new life" for herself in her fifties as she is a different person to who she was in her 20s, 30s and 40s.

"I’m a lover not a fighter. But if you push me, I’ll fight like a lion. I’m a proud feminist.

"I want to love and be loved. But rather be on my own than suffer fools.

She added: "I make good sourdough and good love. And I still hate goat’s cheese."

Ulrika's fans couldn't wait to wish her a happy birthday in the comments.

One wrote: "Just love this outlook as I’m in my early 50’s! Life is totally what you make it and as we mature we know what and who we want in ours"

Another said: "You have always inspired in some way even if it’s been a ‘difficult to watch’ situation. Keep being you, and only you. You magnificent feminine being."

A third gushed: "And you are a beautiful sexbomb. Have a wonderfully Happy Birthday Queen."