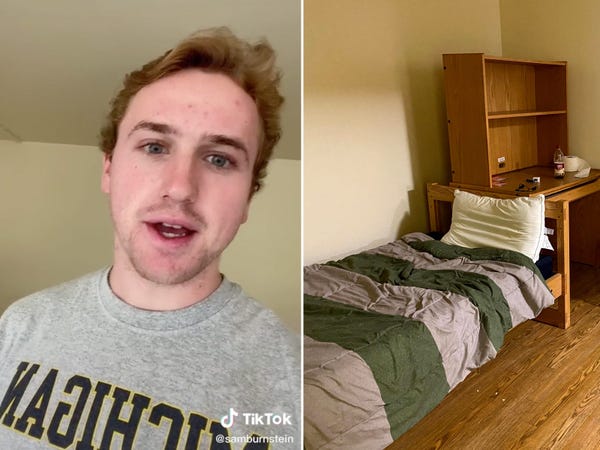 When Michigan junior Sam Burnstein, 20, tested positive for COVID-19 on September 8, he began quarantining in university-provided housing, but he was disappointed by the living conditions at the school's Northwood Apartments.

"We were given a matter of hours to pack up our belongings. We weren't properly told what we should bring and shouldn't bring," he told Insider.

Burnstein arrived with only the essentials. Over the phone, he said he was told to bring a blanket and pillow, but when he arrived, there weren't sheets on the bed, he said. He brought toiletries and clothing for just a few days because he assumed he'd have access to a washing machine.

Instead, he says he found practically nothing.

"There is truly very little support here from the university, that's what made me realize, like, OK, I gotta speak out, gotta do something," he said.

Burnstein took to TikTok to share his frustrations with the accommodations, and his video quickly went viral, racking up 500,000 views in just three days.

"We were given almost no supplies. We were given no food, no masks, no gloves, no microwave, no bedsheets, no soap, no cleaning supplies, nothing," he said in the clip. "Except we were given one roll of toilet paper — single ply. Oh, and did I mention there's a roach infestation as well?"

Burnstein added that students of the Graduate Employees Organization (GEO) had been quarantined undergraduates' "saviors," donating leftover food and supplies.

Graduate students at the university have been on strike since September 8, according to The Michigan Daily. The students are protesting the administration's decision to reopen campus without a robust testing and tracing plan in place.

"We're striking over the university's totally inadequate reopening plans and just the series of policies they put in place over the summer that's making students and workers on campus unsafe," Amir Fleischmann, the secretary of the GEO, told The Michigan Daily.

On Monday, the university's President Mark Schlissel sought a temporary restraining order and preliminary injunction against the union strike, according to The Detroit News.

In his TikTok video, Burnstein went on to challenge university President Mark Schlissel to spend one night in the quarantine apartments.

"Let us all know what you think," he said.

According to Burnstein, the university has not directly reached out to him to address the video.

Commenters also expressed their displeasure with the university and what some believed to be a misuse of extensive funds.

"Universities have shown their true colors during the pandemic," one viewer commented. "It's all about the $$$."

Another student, who goes by Ruby on TikTok, said she was "terrified" and dissatisfied with the university's COVID-19 measures.

In a now-viral video, she reported seeing no evidence of mandatory COVID-19 testing and said the university had "done nothing" to address the GEO strikes.

The university has opted for a voluntary COVID-19 testing plan. Students can choose to participate in the sampling and tracking program. For students with coronavirus symptoms, there are free testing centers on campus. According to the university's COVID-19 dashboard, 57 students have tested positive in the last two weeks.

Burnstein said that testing was one of his biggest hurdles.

"My roommate and I, we drove around for two days to seven, eight different testing places," he said. Burnstein said his priority was finding a testing center that provided rapid results. He went to off-campus facilities, but they required testers to show symptoms, had slow test result turnarounds, or weren't covered by his insurance, he recalled. Burnstein added that he did fill out the on-campus in-take form, which decides if a student is qualified to take a test, but he said he never heard back.

"There's no microwaves or anything," they said. "They give people cold snack foods. There's no washing machines. People are having to order food so they can eat."

The university is pushing back against several claims in the videos, but Burnstein stands by his account

A spokesperson for the University of Michigan told Insider that students are not required to use the school's housing and are free to return to their permanent residences to quarantine.

Burnstein said when he was contacted by the university after testing positive, the isolation apartment wasn't phrased as an option.

"I thought students at the University of Michigan were required to come. And that's because when we were contacted by representatives from the university, it was not presented to us like it was a choice," Burnstein said.

Even if he had been given the choice, going home wasn't a realistic option. Although his family lives nearby, his parents and grandparents live under the same roof, and he didn't want to risk potentially infecting his family members.

For those who choose to isolate on campus, the university said that it is providing students with a furnished apartment.

"Each single-occupancy apartment includes a furnished bedroom, including sheets, blankets, and pillowcases. Each kitchen has a refrigerator and oven. Microwaves are being procured for each apartment," the University of Michigan spokesperson said in a statement to Insider. In the comments section of his video, Burnstein updated viewers that he had been given a microwave.

The university spokesperson also told Insider that the school has not received any complaints about pests in the isolation apartments.

Michigan Dining, which delivers meals by request for those with a meal plan, will soon be delivering all meals in microwavable packaging, according to the University.

Since Burnstein is not on a university meal plan, in order to receive food, he'd have to pay $20 a day, he said. The meal request form doesn't specify what meals are being served, and according to Burnstein, they don't have a structure in place to accommodate those with dietary restrictions. The university did not respond to Insider's request about the cost and dietary restrictions of the current meal delivery program.

Instead, Burnstein purchased pots and pans, ordered groceries, and has relied on delivery services throughout his 10 days in the isolation apartment.

When Burnstein leaves the isolation apartment on Wednesday, he's looking forward to human interaction and putting on some clean clothes.

"I think this has been a big eye-opening experience for how we can do better," he said.