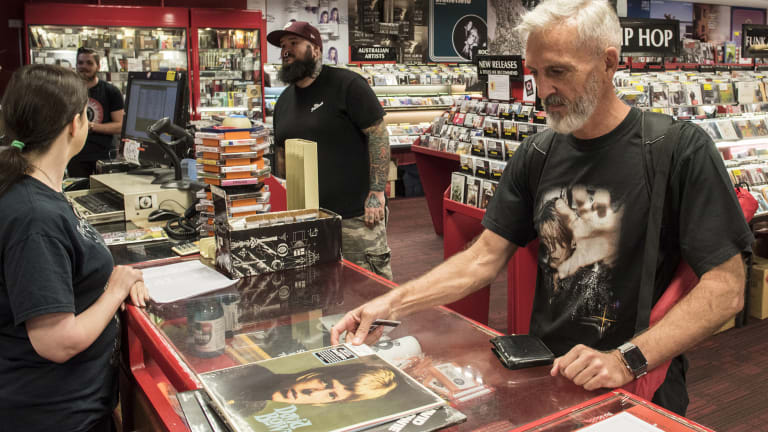 Brad Scanlan thought he had gotten the date wrong when he turned up at Red Eye Records just after four yesterday morning to find York Street empty.

Wearing his David Bowie t-shirt, Scanlan said he was waiting to get his hands on four limited-release records by the British singer, adding how devastated he was when news broke of Bowie’s death last year.

Across the world, vinyl-lovers like Scanlan were lining up before the crack of dawn ahead of Record Store Day, hoping to get first pick of limited edition Frank Zappa and The Cure records relased exclusively to independent retailers.

But the early start was worth it for many. By the time Red Eye opened, Scanlan was first in a 200 person queue.

Record Store Day started in 2008 as a way to bring staff, customers and artists together to celebrate independent vinyl retailers. A decade later, around 50,000 music lovers visited their favourite stores in 30 nations around the world, hoping to pick up an exclusive one-off vinyl.

“It came out of a time when small stores were being squeezed out of the market by ‘category killers’, like Walmart, who would just stock everything and stock it cheaper than [independent retailers] could buy from a record company,” Red Eye Records co-owner Adam Fisher told Fairfax.

“We realised we needed a point of difference to remind people that we have more to offer than just price. There is advice and atmosphere that you get in a small shop.”

Big-name artists and local bands partner with independent retailers to release exclusive vinyl for the day. “It was like ‘look, which of you artists love record stores and can help us accentuate that point of difference?’” Mr Fisher said.

This year saw 600 limited release records for sale. Among the most anticipated releases was a new album from The Cure featuring 16 new remixes by frontman Robert Smith, and a first-time vinyl boxed set of Johnny Cash’s At Folsom Prison.

The National produced a live recording of the Boxer from its 2017 Brussel show, Arcade Fire released its first-ever vinyl, and Courtney Barnett reissued a collection of her first two EP’s.

Mr Fisher said the day attracted music fans of all ages and genres.

“You could not fit the crowd into an age group. There weren’t a lot of people under 18 lining up, but it goes all the way up to 60 year olds and everything in between: every shape, size and colour. There were fans of everything from Hip Hop to Rock and Roll,” he said.

“A lot of people were leaving the store and saying ‘see ya mate’ to each other and to those in the queues; it was obviously they had been chatting and making friends while they waited.”