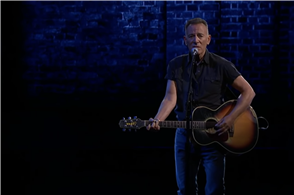 Bruce Springsteen appeared on The Late Show for an intimate, acoustic performance of his 1979 classic song “The River.” The musician performance solo without his band, although the original track features the E Street Band.

Springsteen also sat down with host Stephen Colbert to discuss his new book Renegades: Born in the USA, co-authored with former president Barack Obama. In the interview, Springsteen recounted how he initially thought Obama had the wrong number when the duo connected.

“He’s a Columbia graduate, a teacher of Constitutional law at the University of Chicago Law School, first African-American president of the United States,” Springsteen recounted. “I am a guitar player. I am a Freehold Regional High School graduate…”

Later in the interview Springsteen showcased his Born to Run guitar and played some footage from his 30th birthday party, also known as The Legendary 1979 No Nukes Concerts.

Renegades: Born in the U.S.A., out now globally, is “a collection of candid, intimate, and entertaining conversations,” which began in Spotify’s co-produced podcast of the same name. Published in an oversized, fully illustrated format, the book features rare and exclusive photographs from the authors’ personal collections and never-before-seen archival material, including Springsteen’s handwritten lyrics and Obama’s annotated speeches.

Obama and Springsteen launched Renegades on Spotify back in February.