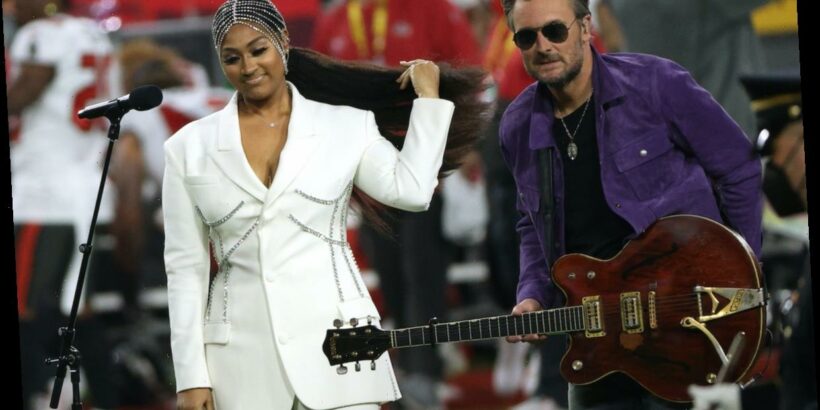 The Super Bowl LV kicked off Sunday with a performance of “America the Beautiful” by H.E.R., who accompanied the patriotic song on electric guitar.

Eric Church and Jazmine Sullivan then duetted “The Star-Spangled Banner” — it was the first time in 15 years that the NFL championship game has featured a collaborative rendition of the song. Church led the rendition on twangy electric guitar, Sullivan joining in on “broad stripes and bright stars.” They sang in unison on “rockets’ red glare” as fireworks erupted above the stadium. As they brought the song home, a trio of jets cut through the sky. The National Anthem duet marked the first time Church and Sullivan have performed together.

In an Apple Music interview (via Tennessean) following the “Star-Spangled Banner” duet announcement, Church said of Sullivan: “She may be the best singer. I was floored. I’m a fan. I’ve went in and listened to everything she did. And I had heard her name, but full disclosure, I had not listened.”

Church, admittedly more a stylist than a singer, said he was reluctant about the anthem performance but “then I heard [Sullivan] and I’m not missing a chance to sing with her. And that was it. Once I heard her voice, I said, ‘OK, I’m in.’”

In recent years, Demi Lovato, Gladys Knight, Luke Bryan, Lady Gaga, and Pink have performed the National Anthem at the Super Bowl. This year marks the first collaborative rendition of “The Star-Spangled Banner” since the 2006 performance by Dr. John, Aaron Neville, and Aretha Franklin.

All 173 of Taylor Swift's Songs, Ranked

The 10 Most Bizarre Country Christmas Songs

Church recently announced plans to release a trio of new albums — collectively dubbed Heart & Soul — over the course of 2021, with the country star debuting new songs “Heart on Fire” and “Lynyrd Skynyrd Jones” over the past few weeks.

In January, Sullivan released her fourth album Heaux Tales, which Rolling Stone praised in its four-star review for adding “more nuance to common stories of romance, shifting the narrative lens to offer more perspectives on the messy business of love, sex, and everything in between.”

H.E.R. most recently her new song “Fight for You,” a track off the soundtrack from the upcoming film Judas and the Black Messiah.