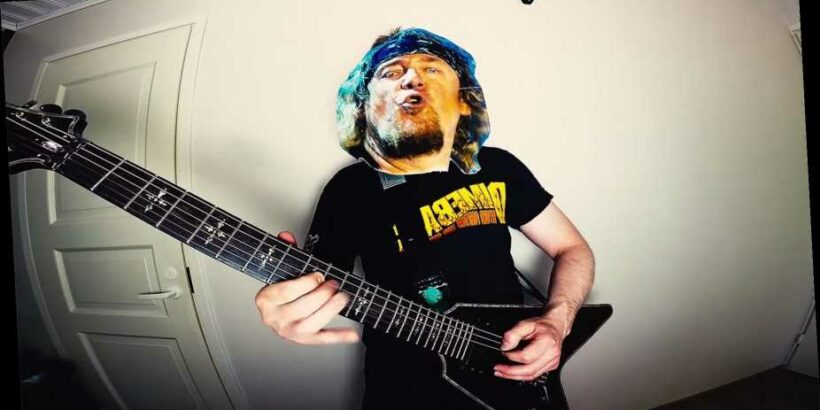 What would Metallica’s biggest hit, “Enter Sandman,” sound like if it were written by one of the band’s chief influences, Iron Maiden? YouTuber Börje Unchained is attempting to answer that with a cheeky cover of the song written in the style of Maiden’s mid-Eighties records.

In the clip, which comes via Metal Hammer, he wears masks of Maiden’s members as he recasts the iconic opening riff in “Sandman” as a more ponderous, melancholy line (with stacked guitar harmonies of course) and keeps the shtick going into the verse riff, which now has ostentatious trills and even more Maidenesque harmonies. Then vocalist Robin Roy does his best impression of Bruce Dickinson’s air-raid siren wail. The only thing missing is a Vincent Price-like voice doing the “Now I lay me down to sleep” prayer, à la Maiden’s “Number of the Beast.”

See Metallica Perform 'For Whom the Bell Tolls' at BlizzCon 2021

Toward the end of the song, Roy attempts his best Dickinson “scream for me …” and shouts out both Maiden fans and Metallica fans, which are, of course, pretty much the same people in 2021. But that wasn’t always the case.

About a decade ago, Dickinson put his foot in his mouth by saying his band was “better than Metallica.” “They might be bigger than us, and they might sell more tickets than us, and they might get more gold-plated, middle-class bourgeoisie turning up to their shows,” he said at the time, “but they’re not Maiden.” He was joking, of course, although it wasn’t totally clear when his words came out in soundbites.

Looking back on the incident in a 2017 Rolling Stone interview, he maintained that his whole rap was simply a grand windup. “We have a great relationship with Metallica,” he said. “It wasn’t aimed at Metallica. It was aimed at the rest of the world to say, ‘We’re back and we mean it. We mean it so much that we’re going to say something pretty outrageous, so why don’t you come to the show and find out. We dare you.’ It’s throwing down the gauntlet, and I’m the lead singer. It’s my job. It’s what I do. So is it arrogant? Uh, yeah. You’re the lead singer of Iron Maiden, and you’re going to be arrogant every now and again, because it kind of goes with the territory, yeah.”

But of course, Metallica never took it seriously. After all, they’d already paid tribute to Maiden on their 1987 EP, Garage Days Re-Revisted, when they closed the record out with a janky attempt at the intro to “Run to the Hills.” Maiden returned the favor by shouting out Metallica at the end of their cover of Montrose’s “Space Station No. 5.”