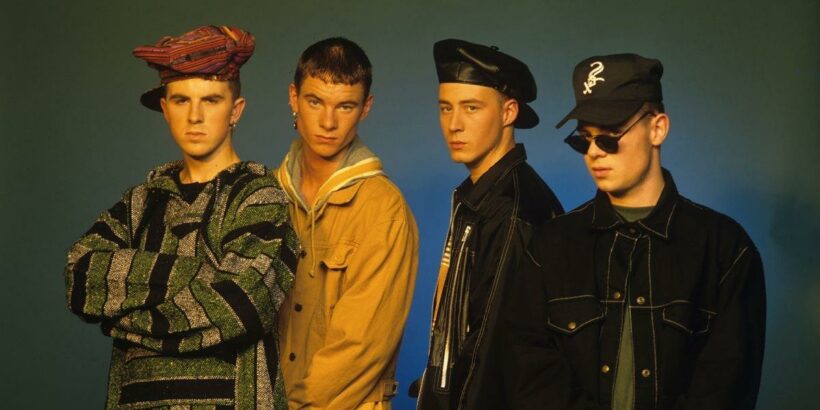 Nineties boybands are making a huge comeback this year, with chart topping trio Hanson recently announcing a new album and world tour – 25 years after the success of their single MMM…Bop.

They're not the only ones who have plans to take the music world by storm once more, as Five also released their latest album, Time, in January 2022.

It seems like only yesterday that we were cutting out the pictures of our favourite boybands and sticking them on our school planners, or placing their posters all over our bedroom walls.

To celebrate the return of some huge nineties groups, Daily Star has taken a look at where some of the decade's biggest boybands are now.

Hanson took the charts by storm with their worldwide smash-hit single MMM…Bop – propelling the teenage brothers to stardom.

Following the release of their album The Middle Of Nowhere, the brothers followed up their debut hit with singles including Where's The Love, I Will Come To You and Weird, which featured on the soundtrack for Hollywood film The Borrowers.

They later went on to found their own independent record label in 2003, and since then have released a series of albums including 2018's String Theory.

Twenty-five years after their first number one record, the now grown-up Hanson are heading to the UK on their upcoming world tour in 2022 and releasing their new triple album Red, Green, Blue in May.

However, the boys have been just as busy in their personal lives – appearing on The Masked Singer US, founding their own beer brand MMM…Hops, and starting families of their own.

Keyboardist Taylor has the most children though with wife Natalie, totalling seven – with the brothers having 15 children all together.

However speaking to US Weekly, Zac said: "I might be all finished. I have a two-month-old, Taylor has a five-month-old," before asking his other brother: "Isaac, are you having any more?"

Isaac replied: "I think that ship has sailed for me. I don’t think I’ll be having any more kids."

East 17 are one of the UK's most successful boybands, achieving 18 Top 20 singles including Christmas No1 Stay Another Day, and four No1 albums since forming in 1991.

However throughout their history, they have had multiple line-up changes, including the departure of Brian Harvey in 1997 following outrage at controversial comments he made in an interview regarding drugs.

Brian rejoined the group in 1998 when they re-branded as E-17, before starting a solo career where he topped the charts yet again with the song Loving You – a collaboration with Wyclef Jean.

The band have had a number of reunions throughout the decades, with original members including Tony Mortimor and John Hendy leaving the group in recent years.

However Terry Coldwell still tours with East 17 and released the album 24/7 in 2021, following a 90s tour with bands including B*Witched and Atomic Kitten.

Speaking exclusively to Daily Star in 2021, Terry also revealed that the original members do not speak anymore and that it is unlikely that the band will get back together, saying: "None of the original four talk anymore – no one talks to no one."

When asked about his former band mate Brian Harvey, who made headlines for his lifestyle and involvement with the police, Terry added: "If he is having a tough time, you know, yeah, there are obviously feelings there, you know what I mean?

"We spent a good few years working together. But man, I just hope he can sort them out and he can move forward."

The late nineties saw another chart topping British boyband hit the music scene, after Five were formed by the team that had managed the Spice Girls.

Five achieved worldwide success, selling a total of 20 million singles worldwide including If Ya Gettin' Down, When The Lights Go Out and Keep On Movin'.

However, band member Sean Conlon left the group in 2001 after it was reported he was suffering from stress of being part of the group, with the band splitting later that year.

Scott Robinson also revealed in an interview with New Magazine that their huge fame also had an affect on him away from the limelight, saying: "At the start, I'd be the chatty one, answering all the questions [in interviews], and then, if you look at footage of me two years in, I'm just sitting in the back with a cap on, thinking, 'If you want the limelight, you take it.'

"Towards the very end, I'd cry before I had to go and do a photoshoot."

Despite the band breaking up in 2001, fans were delighted when four of the original members, including Sean Conlon, came back together for the programme The Big Reunion in 2013, with the band embarking on a UK Tour.

Five have since become three following the departure of Abz Love, but have still kept their famous name and performed as part of the Boys are Back Tour alongside 911, Damage and A1 in 2020.

They also released a new album called Time on January 28 2022.

Light Funky Ones (LFO) formed in 1995, but would not achieve worldwide success until four years later, after the release of their hit single Summer Girls in 1999.

Along with supporting megastars including Britney Spears, the group embarked on a hugely successful 230-date world tour in 2000 and released further chart topping singles including Girl On TV.

However the group parted ways in 2002, but embarked on a number of reunions in the years to follow.

Their reunions were sadly cut short by a number of tragic deaths within the band, with Rich Cronin dying on September 8, 2010 after being diagnosed with leukaemia.

LFO released a single called Perfect 10 in tribute to Rich Cronin in 2017, but in the same year, band member Devin Lima was diagnosed with stage four adrenal cancer and died at the age of 41 in November 2018.

Their remaining member, Brad Fischetti, continues to perform their songs on tour with fellow boybands including O-Town.

American vocal group Boyz II Men rose to fame in the early nineties with their hugely successful power ballads including End Of The Road and I'll Make Love To You.

The group have continued to release music and perform across the world, including joint tours with eighties boyband royalty New Kids On The Block, and collaborated with huge artists including Take That and Justin Bieber.

However in 2003, band member Michael McCary left the group after being diagnosed with multiple sclerosis.

The group most recently released their studio album Under The Streetlight in 2017, and are due to perform at the New York State Fair later this year.

In 2017, a street in their hometown of Philadelphia was also renamed Boyz II Men Boulevard in recognition of the band's impact on popular music.

The Backstreet Boys are one of America's most successful boybands of all time, having topped the charts around the world with huge hits including Larger Than Life, As Long As You Love Me and Everybody (Backstreet's Back).

Not only have they sold over 100million records worldwide, but they were also recognised with a star on the Hollywood Walk of Fame in 2013.

However band member AJ McLean has also spoken openly in the media about his battle with alcohol addiction while in the band, and recently celebrated one year of sobriety in 2020 with an emotional post on Instagram.

In the post he said: "Today is a very special day for me. It's been a hell of a ride. I'm sure all of you guys know that I have been struggling with alcohol and drug addiction for a very long time.

"Well over 20 years. And you know it's just always been an uphill battle. And to finally get to today – one year sober. One year, a hundred percent, legitimate sober. No relapses, no mess ups, no do-overs. It's been an amazing journey."

AJ also spoke candidly about his alcohol addiction battle on the Oprah Winfrey show, before the host surprised him with appearances by his former Backstreet Boys band members during a time when the group had disbanded.

The group have since reformed and released their first independent album in 2013 called In A World Like This, with original members of the band AJ McLean and Kevin Richardson, who had departed the group in 2006 before rejoining again in 2011.

The band are now due to perform a residency in Las Vegas opposite boyband royalty including Boyz II Men and N'Sync in 2022.

The 1990s started off with a bang as boyband heartthrobs Take That burst onto the music scene with their good looks and catchy songs.

As well as introducing the world to icons including Robbie Williams and Gary Barlow, the group went on to huge UK success – winning eight BRIT awards, selling 14million albums and receiving an Ivor Novello Award for their Outstanding Contribution to Music.

Despite having huge success with singles including Relight My Fire, Pray and Back For Good, band member Robbie Williams departed the group in 1995, with the band breaking up one year later.

However that was not the last we saw of the boys though, with Robbie achieving record heights of fame as a solo artist, releasing singles such as Angels and selling out stadiums across the UK.

Gary Barlow and Mark Owen also went on to have highly successful careers as solo artists and songwriters, before Take That reformed in 2005.

The group have since released further chart topping albums including Circus and X-Men film soundtrack Love, Love in 2011 after Robbie briefly rejoined the band.

However, band members including Robbie and Jason Orange have since left, leaving Howard Donald, Gary and Mark performing at the only remaining original members of the group.

In 2014, it also emerged that Gary was one of a number of stars reported to be involved with a tax avoidance scheme, along with his Take That band mates Mark Owen and Howard Donald, and manager Jonathan Wild.

They were later told to pay back over £20million to the HMRC, and Gary has apologised many times publicly and has admitted taking full responsibility for his actions.

Talking on the BBC radio show Desert Island Discs, he said it was "really awful" time, adding: "I take full responsibility for that."

The group continue to tour across the world, while Gary Barlow has also carved out a successful career as a judge on TV programmes including ITV's Walk The Line.