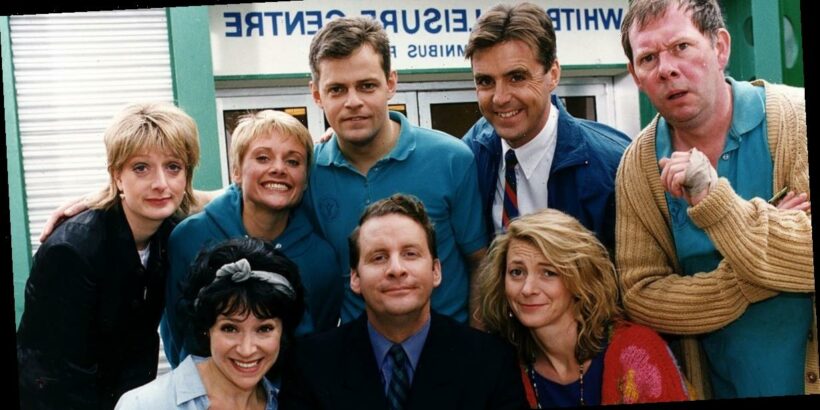 Beloved BBC sitcom The Brittas Empire won legions of fans during its seven series based on the drama of the Whitbury New Town Leisure Centre, running from 1991 to 1997.

Centred around eccentric leisure centre manager Gordon Brittas, the show is considered to be one of the best sitcoms from the BBC.

But amid the news that the stars of the show are reuniting to mark the 30th anniversary of the hit series, what have the cast been up to over the last few decades?

Daily Star has taken a look at the stars who rose to fame as part of the Brittas Empire, from main star Chris Barrie to his on-screen with Pippa Haywood, and where they are now.

Disaster-prone Brittas, whose common phrase was “I have a dream”, had to deal with everything from OAP squash-court massacres to outbreaks of deadly diseases, electrocution of children, chainsaw decapitation and the chaining up of Seb Coe.

He was even crushed to death by a water tank at the end of ­series 5 which was intended to be the last episode of the sitcom.

But it was so popular it was resurrected for two further series.

The eventual ending of The Brittas Empire – which revealed all the events of the show had been a Dallas-style dream – was panned.

After the sitcom ended, Barrie starred in flop comedy A Prince Among Men, playing a former footballer turned entrepreneur.

But he is best known as pompous hologram Arnold Rimmer in Red Dwarf, a role he has played since the show started in 1988. It was revived in 2009 by the Dave TV channel with a film version last year.

He also played a butler in the Tomb Raider films alongside Angelina Jolie and has presented a series of documentaries about great machines.

In 2014, he reprised his role as Brittas for a brief appearance in Little Mix’s Word Up! video for Sport Relief.

A fan of vintage motorbikes and fast cars, the 60-year-old has been married twice and has
two sons.

Calm, dependable and efficient, deputy manager Laura was everything Brittas was not.

Actress St John, pictured left, went on to work with Harry Enfield on the comedian’s Harry Enfield and Chums show, as well as his follow-up series, Brand Spanking New Show.

The 61-year-old also made regular appearances on A Touch of Frost and Casualty. But her last role was in a 2012 Bollywood movie.

Haywood played Brittas’ long-suffering and jittery wife Helen, who coped with her irritating husband via medication and ­extramarital affairs.

Since then, she has appeared in many top TV series including Green Wing, Jonathan Creek, Silent Witness, Mr Selfridge and Scott and Bailey.

In 2018, she was top cop Lorraine Craddock in hit drama Bodyguard and also plays the Duke of Hastings’ housekeeper, Mrs Colson, in Netflix smash Bridgerton. Mum of two Haywood, 59, also has a role in upcoming dementia drama Supernova with Colin Firth and Stanley Tucci.

Thorpe’s neurotic receptionist Carole was best known for ­keeping her three children shut in drawers and cupboards in the leisure
centre foyer.

The actress, 63, has since appeared on TV most notably as dim magazine editor Fleur in smash hit sitcom Absolutely Fabulous and its 2016 film. She also starred in the Calendar Girls movie and has played stage roles in Les Miserables, Mamma Mia and Wicked.

Burns’ character Colin had all manner of skin complaints and a questionable attitude to hygiene but was unwavering in his devotion to his boss.

The actor went on to do odd episodes of TV favourites including Emmerdale, Heartbeat, Casualty and Hollyoaks.

Enthusiastic and cheerful pool attendant Linda had a deep admiration for Mr Brittas, despite his many failings.

Actress Greenacre, 55, has mainly appeared in short and lesser-known films and on stage, but also works as a shiatsu masseuse charging £40 per treatment.

She also performs shiatsu massage on horses at £50 a time.

Flynn starred as fiery northerner Julie who was Brittas’ secretary but hated him. She went on to play various roles in Heartbeat, Holby City and more recently Hollyoaks, Ackley Bridge and Call The Midwife. She provided voices on Peppa Pig from 2009 to 2017.

Flynn, 58, has also been a regular on daytime soap Doctors where she’s played six different characters in 13 years.

Porter’s turn as pool attendant and chef Tim was his only foray into TV – he has since retired from the business. But he will be back for Thursday’s reunion event on Facebook.

Marriott left the TV world following his Brittas turn as pool attendant Gavin – who was in a relationship with bisexual chef Tim – and became director of drama at Eastbourne College.

The 62-year-old dad of two has penned several works for the stage and now performs a PTSD-themed solo show called Shell Shock.