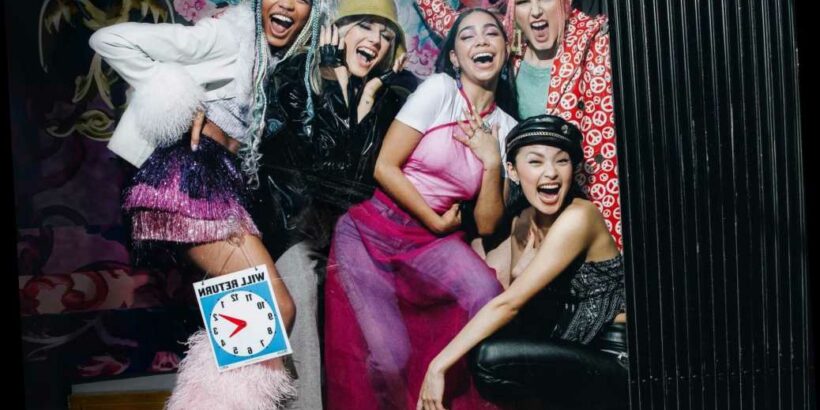 It's Boys World and you're just living in it!

On Friday, the girl group released their debut EP While You Were Out — their 5-track EP that showcases the intricacies of being a teen in its lyrics and highlights the girls' musical versatility.

"We're just like any other teen girl out there, you know what I mean?" says Queenie. "I feel like when people put out projects, a big goal of everyone is always to be reachable and relatable. And I feel like this EP is relatable to a regular teen girl going to high school."

Boys World — comprising Olivia Ruby, Elana Caceres, Lillian Kay, Makhyli and Queenie — say that the new record is proof that they're "getting to know our own sound and individual sounds" as well. "I feel like people are actually finding out who Boys World is," says Elana. "And they know that we have this powerful message."

"If you want some positivity in your life, some light, some laughs, then you should listen to our music," she adds.

The girls aren't just being introduced — they already have a strong, dedicated fanbase they call their STARS.

"As a stan of certain people myself, it's just the fact that we're creating that [for someone else]," adds Olivia. "They're making friends with each other. They're probably going to meet each other when we go on tour."

The girls — who all live under the same room and enjoy outings together as best friends — say the key to their success as a partnership is communication and allowing themselves to have personal space whenever needed.

"It's important for us to have an escape to be ourselves and just have our own self and own space to recharge," says Olivia.

"It's just very rare for this situation to even be a thing. There are not many people who live together, work together, sleep, eat, all the same things," adds Makhyli. "So, I feel like when it comes to something that extreme, you have to have extreme communication and talk through stuff."

Boys World talk to PEOPLE as they break down every song on their EP:

The group's EP starts with their debut song, "Girlfriends," a teen pop song about putting your gals above your pals.

"The EP starts out with you being with the girls," Lillian Kay explains. "We start with something like that, because it's literally our brand: girls supporting girls."

"It's the epitome of who we are," says Queenie.

The girls describe the track as their "first impression" and "what we're all about."

"Baby I can love you or love you not / Hope you're down with the friends I got," the group sings on it. "But if you're not, gotta cut you off / 'Cause you know girls stan girlfriends over boyfriends."

For Queenie, "Wingman" is about staying true to yourself.

The R&B-back song with disco influences lyrics talk about being "too my fly on my own" and that "my equation is me + me instead of me + you."

Makhyli gets excited talking about "Tiptoe" and its storyline.

"Oh my gosh," she says. "There's this person in your life who is super sneaky, shady, doing stuff on the low behind your back. But, you know what's going on, and you're like, 'Why are you even pretending? I literally know what's happening. Just admit it.'"

On it, the girls sing about a love interest "tiptoeing" around them while they hide the truth. The track also showcases Makhyli's hidden talent: rapping.

Elana explains that "Relapse," the EP's only ballad, is the natural sequel to the relationship-gone-bad in "Tiptoe."

"It's that same exact person and you're caught in such a toxic cycle," she says. "And you feel like you just can't get over them. The lyrics in this ballad are just too powerful."

"You just keep going back to them over and over again, and you don't know how to stop it, and you regret it, and you're just stuck," she adds.

The song gives the girls a perfect chance to showcase their vocals on such an emotional song.

"I was getting this close to letting you go / but then I fall back / Why'd I do that?" they sing on the track's chorus. "I wish that my heart was stone / and I had more self control / But I fall back / and I relapse." The last track "Touched By An Angel" is the perfect coda — an upbeat earworm and a reminder to love yourself.

"Then you're like, 'Ugh, I'm tired of being the sad girl. Boy, whatever,'" explains Olivia. "Like 'I'm tired. I just can't do it anymore.' And you realize, 'Oh, they don't realize that they've been touched by an angel!'"

"You're realizing your worth. You're realizing a lot of things. You're finally in a good headspace. You don't know you've been touched by an angel. Because you lost all this," she adds.

Elana calls it "your revenge song."