Don't expect a masterclass on songwriting anytime soon from Gareth Liddiard. The Drones frontman has rightfully been praised as one of the finest lyricists in the country, with an eye for novelistic detail and a command of wrenching themes, but when he talks about writing the songs on A Laughing Death in Meatspace, the debut album of his co-operative new quartet Tropical F— Storm (TFS), artistic imperatives barely get a look in.

"When you've got a new band and you need songs anything anyone says will go into a song," Liddiard says. "Trust me, I'm not waiting for a choice moment. I was frantically scrambling to gather ideas and as soon as I had them organised we were recording. It was rush, rush, rush." 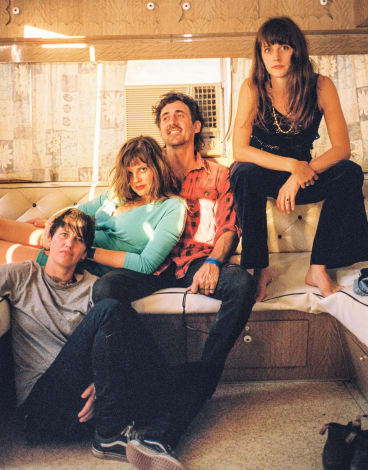 With the album out today, Liddiard is momentarily able to pause. Sitting in an empty pub in Melbourne's inner-north, he bats queries back and forth with Erica Dunn, TFS's fellow guitarist and a friend whose recent album as part of the snarling rock trio Mod Cons Liddiard produced. She's aged 32, while he's 42, but the decade's difference in age didn't create a generational divide.

"We have a lot of overlap, but it's Gaz who is more likely to say, 'Hey, listen to this Rihanna song, this is my favourite one'," Dunn says. "He's the one pushing Rihanna and I'm the one pushing The Stooges back at him."

Liddiard and bassist Fiona Kitschin were looking to short-circuit the timelines that steer The Drones when they first conceived of a separate band a year ago. Approaching Dunn and drummer Lauren Hammel – "Hammer" to her bandmates – set up a necessary new outlet for Liddiard's songwriting.

"The Drones has been going for ages and the other guys have a lot of other stuff going on, so if you get offered a tour at short notice Me and Fi can do that, but The Drones can't," he says. "It's an organisational nightmare, even though we're the most obscure successful band in the world. So we just put it aside for a while."

Dunn and Hammel had barely visited Liddiard and Kitschin to jam together at their base of operations in rural Nagambie, approximately 120 kilometres north of Melbourne, when the nameless quartet was offered a support slot on a tour of America with Melbourne psychedelic rock crew King Gizzard & the Lizard Wizard. They accepted the tour, chose Tropical F— Storm (the name of The Drones' record label) as their band name over Three Women and a Baby, and got to work.

For Dunn, who as well as multiple bands had just finished an intensive eight years of teaching English to newcomers to Australia, it was a pleasure to throw ideas around before piling into a tour van for long American drives. They would improvise as required: the low-budget creature feature video for the single Soft Power was shot in an abandoned studio in Little Rock, Arkansas.

"We just had to build something quick. The Drones is hard to move fast – we sat on the last album for a year. You write but then you have to get into a management headspace," Liddiard says. "With a new band you've got the chance to make a quantum leap, which just isn't possible with a band that is full of habits and muscle memory."

"They weren't laboured decisions," notes Dunn, an outlook they continued back in Australia when th bulk of A Laughing Death in Meatspace was written and recorded over the last six months. Liddiard would purchase gadgets and gear from the Swedish audio design house Teenage Engineering, which the band used to create unconventional rhythms that Hammel would expand on as the basis for each song on what is a daring, discombobulated album.

"Everyone's been outside their comfort zone in some capacity," Dunn says. "Fi and I had to learn a lot of intersectional guitar and harmony lines, and it's fun to be challenged. I didn't ever think Gaz and I would do duelling atonal guitars for Antimatter Animals where it took two months to learn the parts, but we did."

Tropical F— Storm play at The Cambridge, Newcastle, on Friday, May 4; Oxford Art Factory, Darlinghurst, on May 5; and Howler, Brunswick on Friday, May 11, and Saturday, May 12.