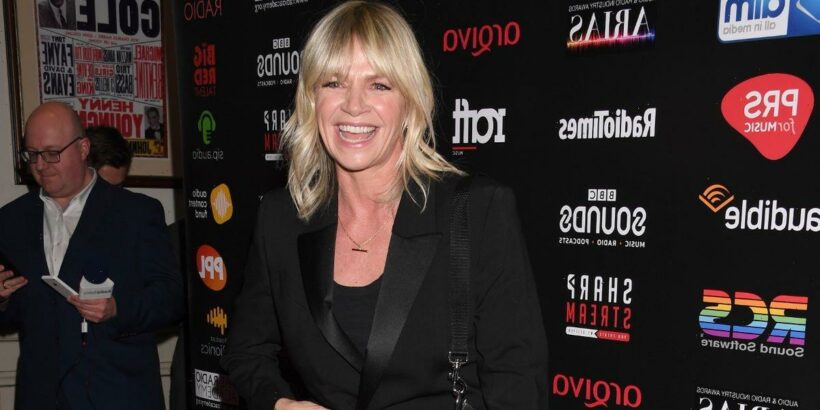 Zoe Ball has issued an apology to her fans after abruptly dropping out of hosting her BBC radio show mid-way through due to feeling "unwell".

Leaving half an hour after arriving at the mic, Zoe left BBC Radio 2's breakfast show early which left fans feeling concerned about her swift departure on Monday morning (April 4).

Dropping out abruptly and being quickly replaced by travel reporter Richie Anderson, listeners were worried about the popular host.

Richie stepped up to the mic, quite literally, and explained that Zoe was unwell.

Her sudden departure came after she was already running late for her 6.30am start due to having a flat tyre, which meant Richie covered for her for 20 minutes until she arrived at the mic at around 6.50am.

But a short while later at around 7.30am, Zoe had gone and Richie was back. He then explained: "I'm Richie Anderson and I'm in because Zoe's not feeling too well unfortunately.

"So she's had to go home which means you're stuck with me. We are sending Zo loads of love."

Richie hosted Zoe's show until 8.30am before Ken Bruce came on air an hour before his scheduled slot.

Taking to Twitter to update her fans she penned: "Apologies for this morning gang, tyre went on the way in to work. I was so keen not miss the show, dashed in and hadn't quite realised the effect it'd had on me."

She added: "I'm ok. Thanks for the lovely messages.

"Big thanks to Richie and Ken for stepping in. Will be back tomorrow xx."

Followers were quick to flock to the replies section to send their love and support to the star, with one writing: "I can relate Menopause anxiety/stress is a f**king pain I can handle it in the moment but when the Adrenalin subsides wham it hits you like a freight train and panic attacks/sickness hits – hope you’re ok lovely!"

Another penned: "Take it easy this afternoon and get yourself in the right headspace for tomorrow. Must have shocked you big time. Poor thing. The boys did well in your absence. Just worried for your well-being. Glad you messaged to say you’re ok now."

While a third added: "Hope you're feeling ok now. These things have a habit of catching up with us. The combination of reality kicking in, menopause and also post Covid all have an effect. Hope you've managed to have an easy afternoon."

This comes weeks after Zoe pulled out of her Red Nose Day hosting duties because she was struck down with coronavirus.

For more of the latest showbiz and TV news from the Daily Star, make sure you sign up for one of our newsletters here.