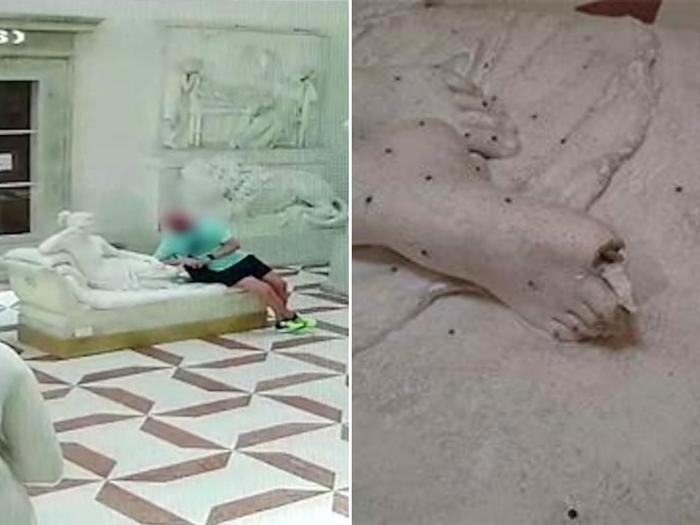 Flying often seems to bring out the worst in people, and tourists behaving badly is nothing new.

But while the global coronavirus pandemic has nearly decimated the travel industry — the Transportation Security Administration (TSA) recorded some of the lowest passenger numbers of the past decade, seeing a 96% decrease in people passing through their checkpoints in April — it did little to dampen the poor behavior often associated with travel.

From dodging quarantine to knowingly flying with COVID-19 to breaking ancient sculptures for a selfie, keep scrolling to see some of the worst-behaved travelers of 2020.

A viral TikTok video shows one passenger sticking gum and candy into another passenger's hair. 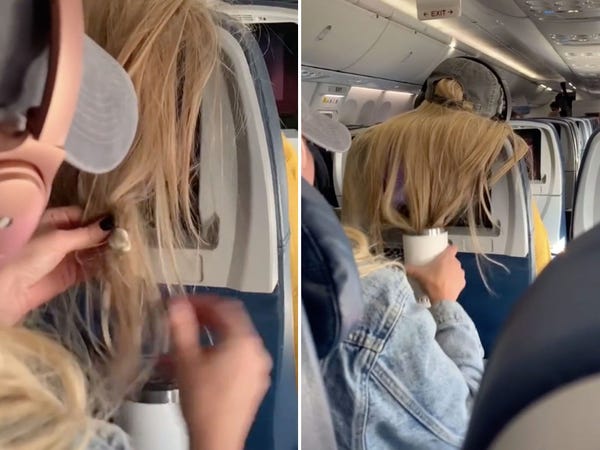 A TikTok video uploaded by Janelle Elise Flom in late November shows a woman repeatedly flipping her long blonde hair over her seat back, blocking the TV screen for the passenger behind her.

Things quickly escalate when the woman behind her squishes a wad of gum into her hair, followed by a lollipop. She then dunks the hair into a mug of coffee and uses nail clippers to cut some of it.

"Whose side are you on?!" Flom captioned the video, which has been viewed more than 115.1 million times at the time of writing.

While some commenters voice their support for the actions taken in the video, many wonder whether it was staged, suggesting that the passenger was wearing a wig, as she should have felt what was happening.

Three men were banned from Yellowstone National Park after trying to cook chickens in a hot spring. 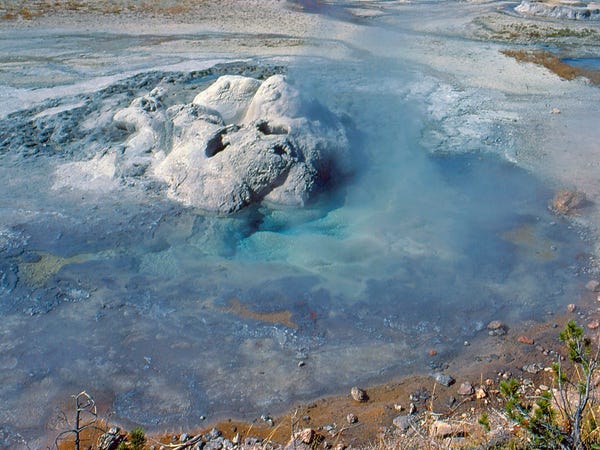 The men, from Utah and Idaho, were banned from the park for two years, sentenced to two years' probation, and fined between $500 and $1,200 for violating the park's use limits, the New York Times Reports.

Yellowstone warns people of getting too close to its hot springs, which can exceed 400 degrees Fahrenheit, and prohibits going off the boardwalks or designated trails, as this has resulted in many deaths and injuries over the years.

Two passengers boarded a six-hour flight to Hawaii reportedly knowing they had tested positive for COVID-19. 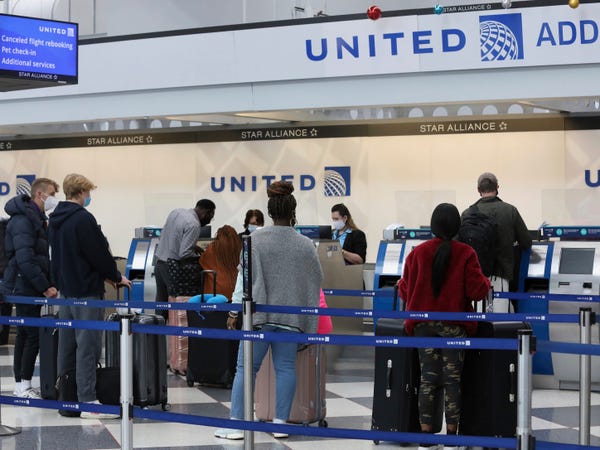 A couple from Hawaii is facing second-degree reckless-endangerment charges after flying from San Francisco to Lihue, Hawaii, while knowingly having tested positive for COVID-19, The Washington Post reported. They were accompanied by their 4-year-old child.

Wesley Moribe and Courtney Peterson were banned from United Airlines and face up to a year in jail and a $2,000 fine if convicted, per Business Insider's Thomas Pallini.

This particular United flight required passengers to fill out a health form that included acknowledging that they did not test positive for the virus in the last 21 days.

An Austrian tourist broke the toes off a 200-year-old Italian sculpture while posing for a photo. 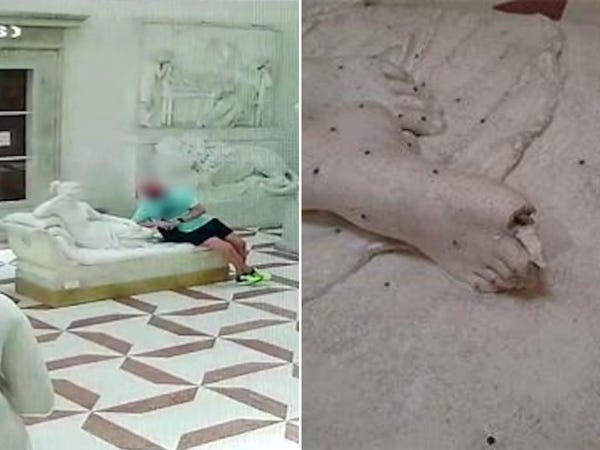 At Italy's Museo Canova, a museum dedicated to the neoclassical sculptor, Antonio Canova, a tourist sat on a plaster cast and broke off two toes of the sculpture, as Insider previously reported.

The cast, which dates back to 1804, broke while the Austrian tourist was posing for a photograph in August.

The tourist quickly left the museum after seeing the breakage and didn't notify the staff. He later apologized for the incident.

Fortunately, the fragments were found and the sculpture could be restored.

A US tourist and her boyfriend were sentenced to prison for breaking Cayman Islands' mandatory 14-day quarantine. 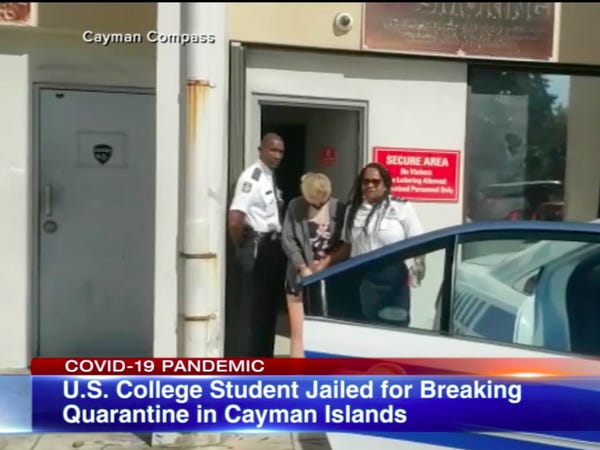 In December, Skylar Mack and her boyfriend, Vanjae Ramgeet, were sentenced to two months in a prison on the Cayman Islands, as Insider previously reported.

Mack, a college student from Georgia, traveled to Grand Cayman, where she was required to quarantine for 14 days. After two days in quarantine, Mack removed the government-issued tracking device to attend Ramgeet's jet-skiing competition.

Mack was charged with leaving her home during the mandatory quarantine. Ramgeet was said to have "aided and abetted her in the breach."

Originally, Mack and Ramgeet were sentenced to four months in prison. The couple appealed the case, and the sentence was lowered to two months. 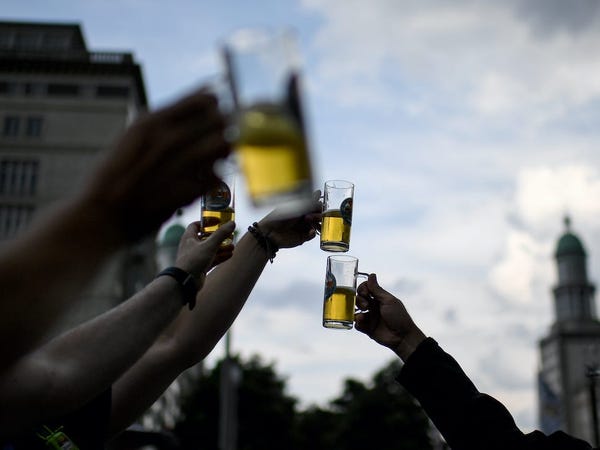 One traveler in Bolton, England, decided to go to a pub crawl instead of self-isolating after returning from a trip abroad in September, according to the BBC.

Two days later, he tested positive for the coronavirus, per the BBC.

The pub crawl was linked to an "extreme spike" of cases in the English town.

But this wasn't an isolated incident. Later that month, a US woman caused an outbreak after going to a bar crawl in Germany while she had COVID-19 symptoms, as Insider previously reported.

The woman, who worked at a hotel, was showing symptoms and got tested for the virus. While she awaited results, she visited numerous bars.

The results came back positive, and following the incident at least 24 people at the hotel also tested positive for COVID-19, per Insider's Bill Bostock.

A woman who refused to wear a mask and coughed on fellow passengers while shouting 'Everybody dies' was kicked off a flight and arrested by airport police. 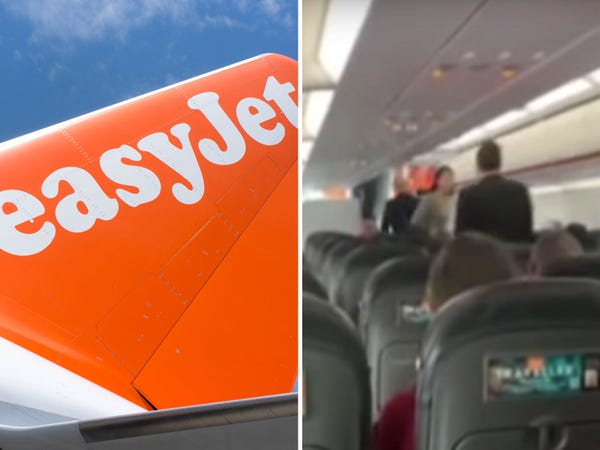 The video was filmed by a fellow passenger aboard an EasyJet flight from Belfast, Northern Ireland, to Edinburgh, Scotland, according to Edinburgh News.

It shows the unnamed woman being escorted off the plane by flight attendants for refusing to wear a mask, per EasyJet requirements, while yelling "Everybody dies, you know that? Every f—— body dies, whether it's corona or not, everybody dies!"

She then willfully coughs on other passengers as she exits the plane.

The woman was arrested by airport police in Belfast, Edinburgh News reported.

In the middle of the night, hundreds of skiers fled quarantine at a resort in the Swiss Alps. 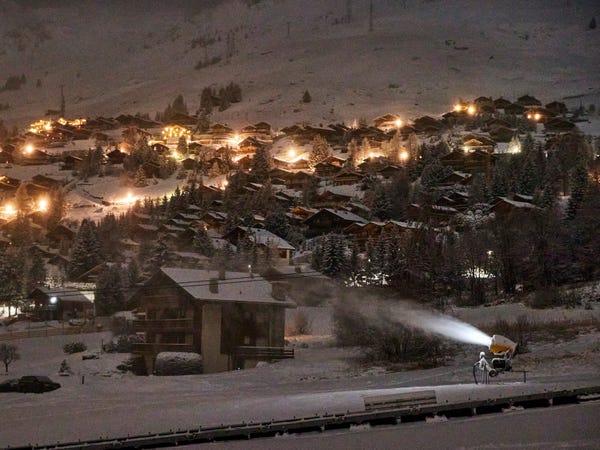 About 400 British tourists visited the Swiss Alps for a ski trip this December, and when they were asked to quarantine, they promptly fled, per Insider.

During their trip in the Alpine village of Verbier, the travelers were told to quarantine for 10 days as authorities sought to control the spread of a new coronavirus variant recently discovered in the UK.

Instead, they fled back home.

"Many of them stayed in quarantine for a day before they set off unnoticed undercover in the darkness," Jean-Marc Sandoz, a representative for the municipality of Bagnes in Canton Valais, which includes Verbier, told the German news outlet Deutsche Welle.

A man was arrested after strolling across a plane's wing right before it was bound to take off. 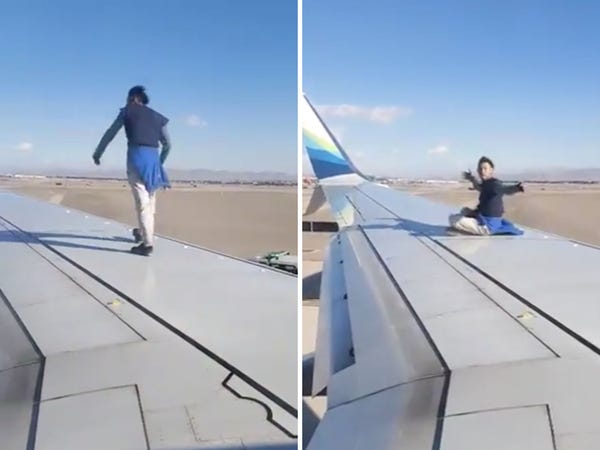 Police arrested an unidentified man who was spotted walking on the wing of an Alaska Airlines plane at McCarran International Airport in Las Vegas on December 12, after having jumped over an airport fence, according to KSNV-TV.

A video of the incident posted on Twitter shows the man taking a seat on the wing before seemingly talking or singing to himself, while another video shows him kicking off his shoes while attempting to climb the winglet (the raised end of the wing).

The plane was headed for Portland, but its pilot spotted the man before take-off, CNN reported.

Rome's Colosseum was defaced by a tourist carving his initials into a 2,000-year-old pillar. 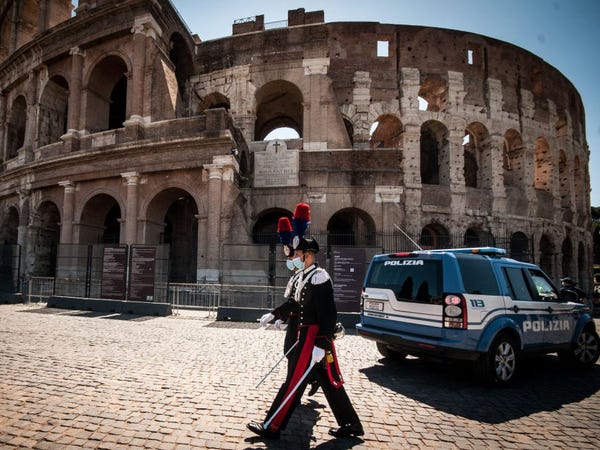 On a visit to the Colosseum this September, a 32-year-old Irish tourist carved his initials onto a pillar on the ancient structure, per Insider's Darcy Schild.

Private security caught the man and immediately reported it to authorities. The tourist reportedly used a metal point to carve two-inch-tall initials into the 2,000-year-old structure.

Damaging a historical or artistic landmark is a crime in Italy, and the tourist could face repercussions, like a fine or up to a year in prison.

Two passengers exited their plane by using the emergency slide as it was taxiing out to leave the airport. 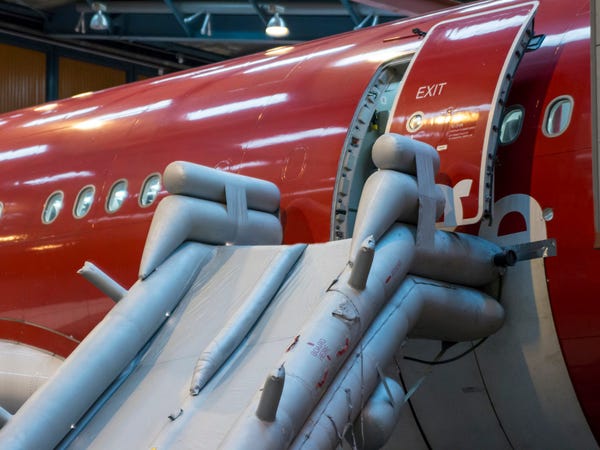 A Delta Air Lines spokesperson previously told Insider in a statement on December 22 that two passengers deployed the emergency slide while their plane was taxiing out of New York City's LaGuardia airport, headed for Atlanta.

Florida residents Brianna Greco, 23, and Antonio Murdock, 31, proceeded to open the cabin door and slide out of the plane with their service dog.

Both were arrested and charged with criminal trespassing, and Murdock with second-degree reckless endangerment and second-degree criminal mischief, according to WABC-TV.

The plane returned to its gate, and the remaining passengers were rebooked on new flights.

Murdock explained his behavior by saying he has post-traumatic stress disorder, according to The New York Times.

In Canada, an American tourist broke quarantine not once, but twice, and could face a $570,000 fine. 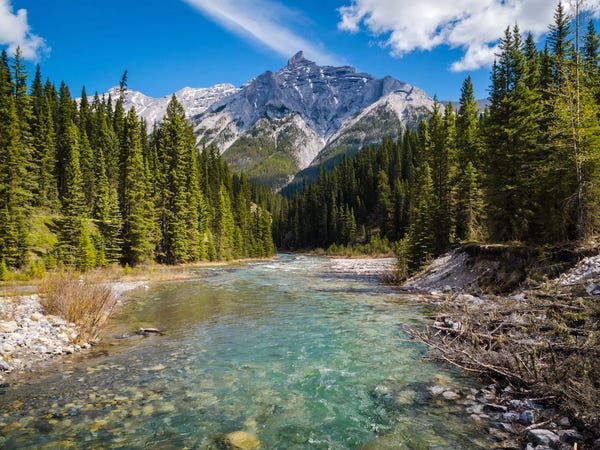 An American tourist was determined to visit Banff National Park in Alberta, Canada, this August.

John Pennington was traveling from Alaska to Canada and broke the Canada-US-border closure, which prevents nonessential American visitors.

He was first cited for breaking the quarantine and later arrested when he was caught again, according to The Washington Post.

The tourist breached Canada's Quarantine Act, which can carry jail time and a fine of up to $570,000 if convicted.

A traveler wanted 'to get some air,' so she opened a plane's emergency exit door and climbed onto the wing. 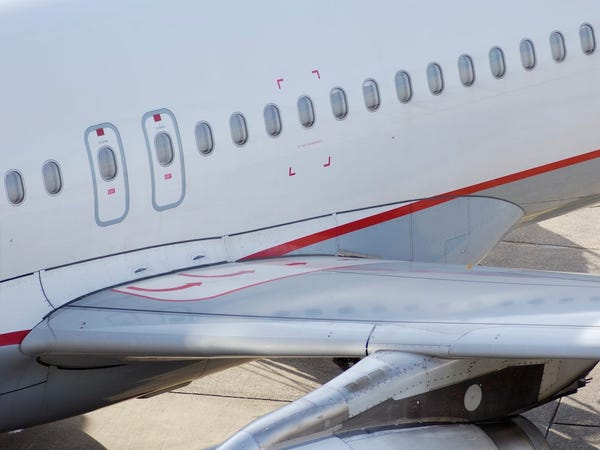 In a viral video posted in September, a plane landed in Kiev, Ukraine, and one passenger proceeded to open the emergency exit and step onto the wing "to get some air."

According to The Sun, the woman was with her husband and two children, and she thought the plane "was too hot" inside. So she opened the exit, walked along the plane's wing, and rejoined her family inside the aircraft.

Since the incident, the woman has been banned from flying with Ukraine International Airlines, according to The Sun.

A woman hit an airline employee after she was barred from boarding her flight without a face mask. 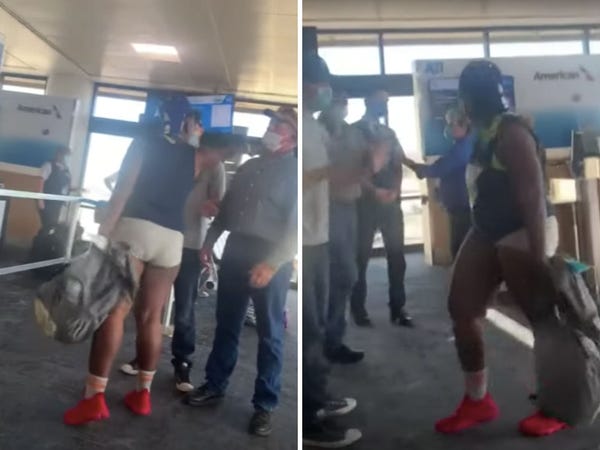 Yolanda Yarbrough, 47, refused to wear a mask on a connecting American Airlines flight from Phoenix to Las Vegas in August and allegedly hit the airline employee who stopped her from boarding the plane without a face covering, NBC News reported.

She was arrested and charged with assault and banned from flying with the airline in the future, pending further investigation.

Throughout the pandemic, hundreds of travelers have refused to wear masks on airplanes. 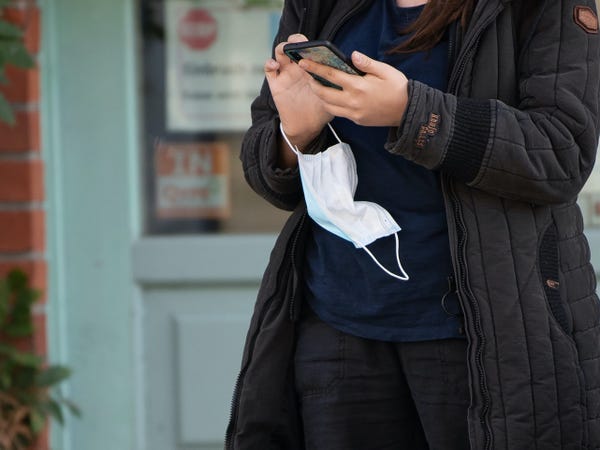 To date, Delta, United, and Alaska Airlines have had to ban over 900 people who refused to comply with mask requirements, the Washington Post reports.

The stories have made headlines, and media outlets, like Travel Pulse, have covered dozens of these stories, from a woman getting banned from American Airlines for calling a flight attendant a 'Mask Nazi' to a passenger getting tased for his refusal to wear a mask.

Several destinations, like Hawaii, have also faced a flood of tourists breaking quarantine to go exploring during the pandemic. 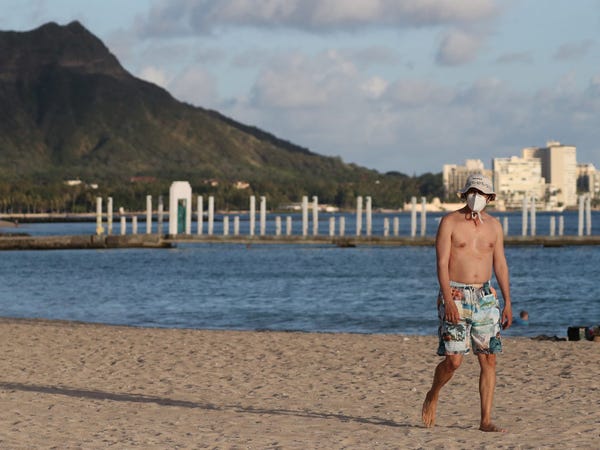 Hawaii has become known for its strict enforcement of its coronavirus quarantine.

These regulations were met with some tourists attempting to break the rules. By July, Hawaii had arrested nearly 200 people for breaking that state's required 14-day quarantine, which was implemented at the end of March, according to Travel Weekly.

Some of the arrests stand out. For example, one California tourist was caught in November for breaking Hawaii's required quarantine by posting photos of herself on social media exploring Maui, according to The Sacramento Bee.

In May, a pair of honeymooners were arrested after leaving their quarantine to purchase pizza, according to Hawaii's COVID-19 Information Center.