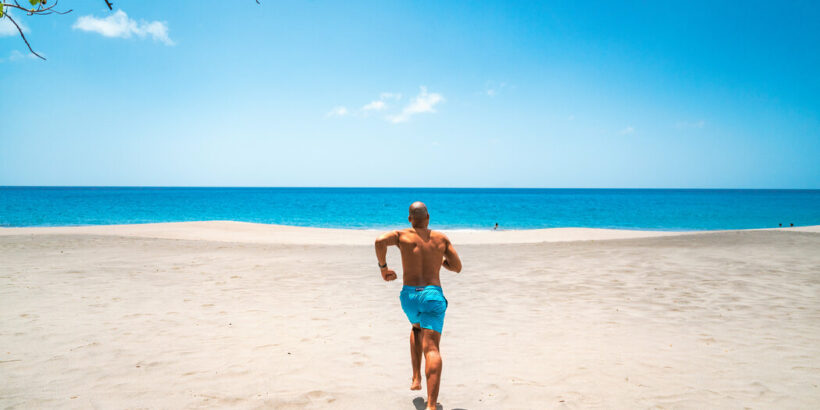 Every day at noon, a melodic chime reverberates across the Caribbean island of Montserrat. For nearly two months, Krystal Bajkor, a visitor from North Carolina, assumed it was a clock marking time.

“I thought it was just an adorable feature of the small island,” said Ms. Bajkor, a former financial analyst who is currently writing a children’s book.

Then in June, her husband, a management consultant, learned that the pleasant-sounding “clock” was, in fact, a daily test of the volcano warning system. The Soufriere Hills volcano, which buried large swaths of the island in rocks and ash in the late 1990s, continues to be active, producing a cloud of hot gas, which appears to hover over its crater.

The meaning of the chime is one of those things that Ms. Bajkor might have missed had she been a typical tourist. Before the pandemic, most visitors to Montserrat floated in for maybe a day, anchoring their sailboats in the port or scurrying off the ferry for a hike before returning to nearby Antigua for the night.

Now in order for a tourist to even set foot on Montserrat’s black sand beaches, she must pass a rigorous background check and make at least $70,000 a year. Until recently, she also had to commit to sticking around for at least two months. In exchange, visitors get almost exclusive access not only to beaches, but also an alternate reality, roughly the size of Manhattan, where the coronavirus does not seem to exist.

Soon after the British territory detected its first few coronavirus cases in March 2020, it closed its borders to tourists. In April 2021, it cautiously reopened with the remote worker program, requiring both vaccinated and unvaccinated visitors to quarantine for two weeks and then take a coronavirus test before exploring the island. So far, 21 travelers from seven families have participated.

The island is certainly not alone in devising creative ways to lure visitors during the pandemic. Countries around the world have crafted and recrafted a vast array of systems to try to keep the money flowing in without endangering the local population’s health. Malta bans unvaccinated tourists from more than 30 countries, but provides hotel vouchers to visitors deemed safe. As of Sept. 19, Israel began allowing tourists in, but only if they are vaccinated and traveling in groups of more than five people.

Numerous Caribbean islands have tried to lure remote workers with “digital nomad visas” that allow a visitor to stay a year or even longer.

But Montserrat’s program stands out even in a sea of unconventional experiments because the island chose to flip the standard term of a visa — the maximum amount of time someone can stay — on its head, requiring instead a minimum visit. It’s also unusual because while other islands have emphasized how easy they want to make it for remote workers to visit, Montserrat has seemed proud of making it hard to join its roughly 5,000-person bubble, where few wear masks or lock their doors.

“They’re very selective in who they let in,” said David Cort, a sociology professor at the University of Massachusetts, Amherst, who spent three months working from Montserrat with his wife, a travel risk analyst, and their daughter. “I was told that they actually turned people down.”

As to whether the program has benefited the island depends on who you ask. What everyone agrees is that the stakes are high. The primary driver of the economy is exporting volcanic sand, not tourism. Still, Rose Willock, a broadcaster who lost her home to the volcano, noted, “It’s always a challenge when we don’t have enough people coming to our island.” Before the pandemic, local businesses counted on 18,000 to 21,000 tourists a year, according to the tourism authority.

But more pressing is, of course, the virus. As of Sept. 15, 33 people had tested positive in the previous 18 months, according to the Ministry of Health. In April 2020, long before tourists were permitted to visit, one infected person died. Given that only around 23 percent of the population has been fully vaccinated, there’s a widespread understanding that if the virus ricocheted across the island, the medical system could not handle it. Should that happen, it could set Montserrat back by years. The volcanic eruption drove two thirds of the population off the island. It has been recovering, but slowly.

“We cannot afford to have the pandemic overtake our situation,” Ms. Willock said.

Ms. Bajkor’s family was the first to participate in the program. Five months later, they are still there.

“I remember toward the beginning of the pandemic, I was like, man, I wonder if there’s places in the world that are not dealing with any of this craziness,” Ms. Bajkor said. In Montserrat, she believes she’s found such a place. She’s been able to take luxuriously mask-free breaths at art shows and drop her two children off at day care with little fear of the virus.

“There’s nothing that can kill you here except the volcano,” she concluded.

For the first two weeks, the visitors holed up in their rented villas. You couldn’t access a rental car until quarantine was complete, said Patrick Bennett, whose family visited in May and June.

“They check on you,” he said. “Every once in a while you hear a car slowly drive by.”

He did not feel trapped, he said, given that he, his wife and his 7- and 10-year-olds were coming from a 1,200-square-foot New York City apartment. Now, suddenly, they had a huge veranda.

Mr. Bennett runs a travel website called Uncommon Caribbean, which focuses on off-the-beaten-track locations. Even for him, experiencing an island without tourists was novel. What he found even more interesting was the locals’ commitment to the island. They were the ones who had stayed after the volcano drove thousands away.

The two-month minimum did not feel excessive, he added. It’s not until the second month “that you are starting to get into the swing of things.”

Dr. Cort, the sociology professor, agreed that the minimum stay was part of the allure. (His family stuck around for three months.)

“This pandemic gives people the opportunity to get to know people and places more intimately,” said Dr. Cort, who normally resides in Laurel, Md.

Being the only customers in restaurants also had benefits. “You just get to talk to the proprietors and they tell you their stories,” he said.

In the evenings, the family walked around Little Bay, which is slated to become the island’s new capital because the volcano wiped out the original one. “It would be fairly deserted,” Mr. Cort said.

But there are worse things than low population density during a pandemic.

How residents see it

“I wouldn’t say it’s been a huge success,” said Clover Lea, who runs Gingerbread Hill, a small hotel. She admitted that her answer was colored by the fact that she has not hosted any remote workers.

Andrew Myers, who owns a scuba shop, wondered why only people who made more than $70,000 were invited. (Technically the primary applicant must make $70,00 but then their family members can make less.)

“I don’t think that was the best choice,” he said. By lowering the financial standards, perhaps the island would have drawn more applicants. Still he noted that it has “worked out well” in the sense that “Montserrat stayed safe.”

How safe is unclear. As of this week there were five coronavirus cases on the island, but all were people in quarantine, according to Cherise Aymer, a spokeswoman for the Office of the Premier’s Tourism Division. Beyond the 21 tourists, technical workers and residents of Montserrat have also come and gone during the pandemic. The Ministry of Health declined to say whether any remote workers had tested positive.

The parameters of this experiment will soon change. Come Oct. 1, all tourists — if they are vaccinated — will be welcome on the island. The remote worker program will continue without the vaccination requirement. And though authorities did not widely announce the change, the territory also recently stopped requiring a two-month minimum stay, Ms. Aymer said. That means the island will never have to confront the question of what to do if a tourist tries to leave before their time is up.