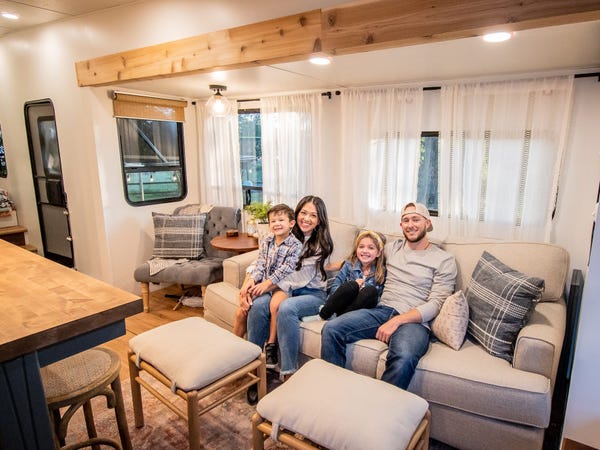 While many move into RVs to hit the open road, Adam, 30, and Teighla Norris, 31, moved in planning to stay put.

Their goal? To get out of debt and save as much money as possible quickly.

The two started dating in high school. They got married four years ago, and have two kids, Emerson, 8, and Cohen, 5. They told Insider that they got to a "stagnant" point with their finances in which they kept paying off only the minimum amount of debt, and decided that they needed a change.

They put their house on the market in late May, bought an RV in June, and moved into it full-time in August, transforming it from dark and drab to bright and modern.

Keep scrolling to read about their financially motivated move, and see before-and-after photos of the stunning renovation.

Thanks in part to school loans, Adam and Teighla Norris found themselves struggling with debt. 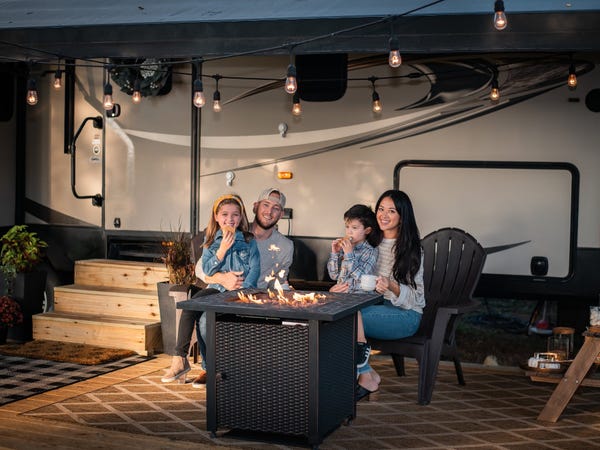 They followed Dave Ramsey's budgeting program for about a year while living in a rental home, but bought a house soon after getting married, which they fixed up themselves. But renovation projects, a new mortgage, and a baby on the way meant more debt.

"We don't want to live with debt," Adam said. "That was really the main driving force behind the decision to move into the RV." 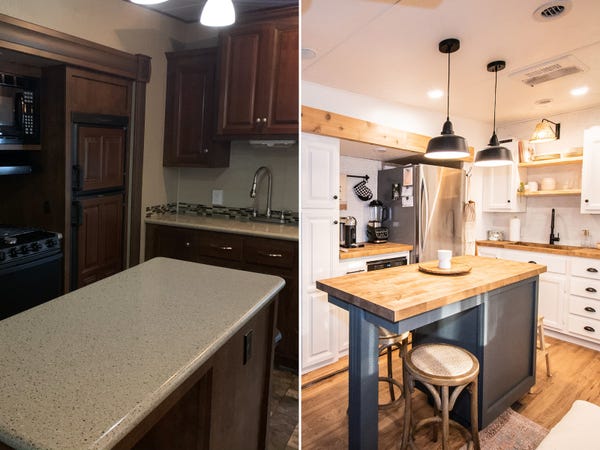 Adam, an engineer, and Teighla, a wedding hair and makeup artist, figured they could either start aggressively paying off debt by setting themselves a strict budget, or sell their newly renovated home in North Carolina's real-estate market after they saw houses getting snatched up within hours of getting listed.

"We did some research, crunched numbers, and realized if we sold our house at where we wanted to sell it, that would basically wipe out the majority of our debt, and pay for an RV," Adam said.

They put their house on the market in late May, bought an RV in June, and closed on their home on August 6, which is when they moved into the RV full-time. 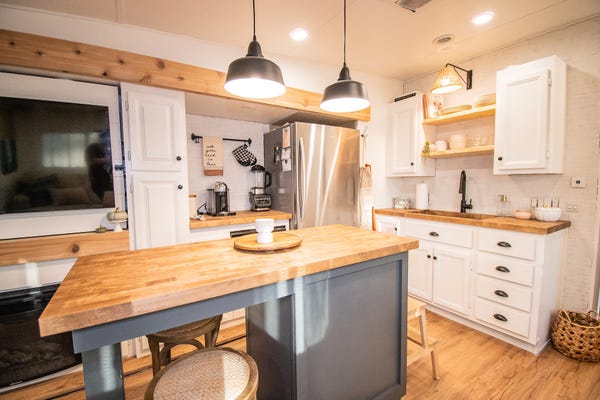 Neither of them had any experience with RV life. "I had never set foot in an RV until we went to look at them to purchase one," Teighla said.

Working their way through Craigslist, all they knew is that they wanted a bunk room setup for their two kids, as well as a separate room for themselves.

They ended up buying a 2015 Coachman Chaparral 360IBL for $28,000, which has a spacious living and dining area, a kitchen with a large island, a residential-size fridge they added, a bathroom with a full-size shower, a bunk room for the kids, and a separate bedroom for them, which features a combo washer/dryer and a queen-size bed.

They had spent around eight to 10 weeks renovating the RV when they moved in, though it still wasn't done. 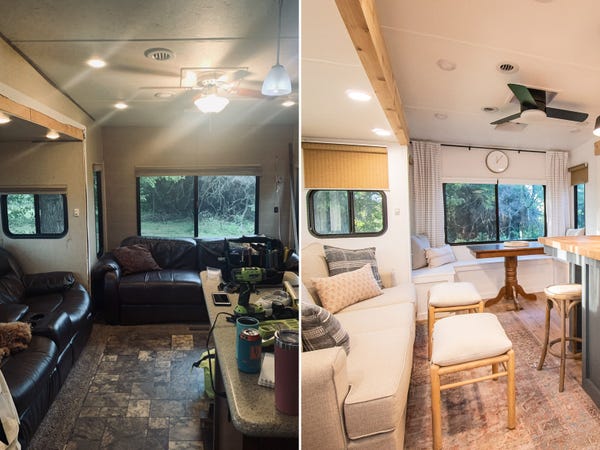 Adam, who taught himself how to fix things when renovating their brick-and-mortar home, said he was surprised by how different the plumbing in an RV is to a regular home. And he noted other differences, such as the large number of screws required to keep everything in place in an RV — a hassle when you're trying to take things out and replace them.

Adam and Teighla replaced practically all of the cabinets, painted everything white, and put in open shelving and built-in seating.

They say they spent around $6,000 for building supplies and furniture.

"We were trying to do this all via cash and didn't want to go back into debt for an RV," Adam said. "So we were just really being intentional about what we bought, where we spent our money."

Teighla, who says she loves Target and makes most of her purchases there, said that she wanted to keep the same vibe from their old home and bring it to the RV. 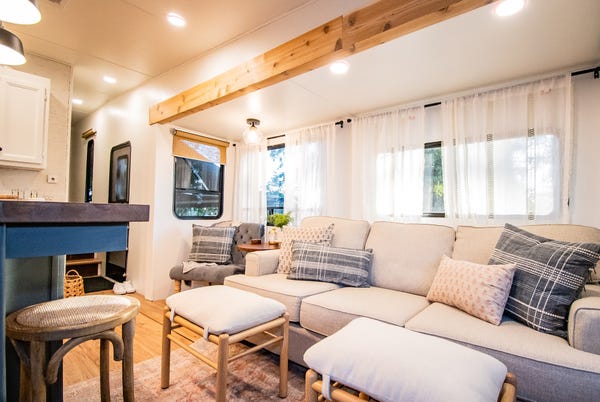 Her goal was to make the RV as homey as possible, describing its style as farmhouse modern.

"When we purchased it, it was very dark, everything was brown and it had a funky smell. So we went in and painted everything white, top to bottom," she said, adding that she likes clean lines, and avoids patterns.

They removed a bunch of overhead cabinets to make the ceiling look taller and the RV more spacious, but then had to find creative ways to store their stuff, like a little storage unit they put in under a built-in seating area in the living room. They also built a wood deck outside.

The two are staying on a friends' property in Burlington, North Carolina, meaning they don't have to spend money on campground fees. 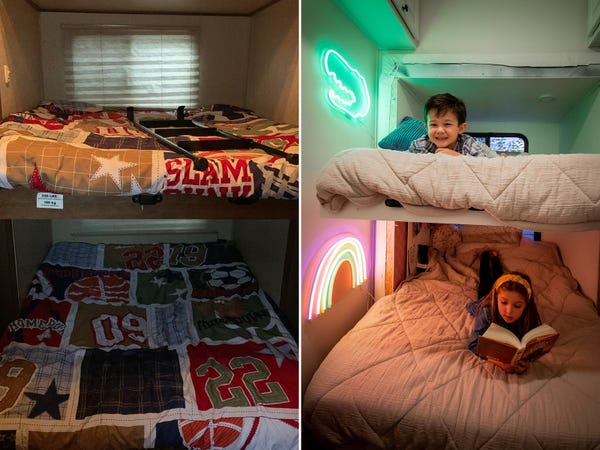 "I know a lot of people will get RVs to travel — that was never our intent," Adam said. "What really was the driving force behind this move was financial, to pay off debt and to try and save a lot of money while determining what our next steps are. And if we travel in the meantime, great."

Not paying campground fees is one perk of staying put that they're grateful for, but another is having their belongings close by. They've kept a few of their things in storage nearby, and say it's convenient for them to grab stuff if they need to, and means they didn't have to get rid of as much. For example, they'll be switching their summer clothes for their winter wardrobe soon.

They haven't really decided how long they'll stay in the RV. All they know is that they want to save money and figure out their next move in the meantime. 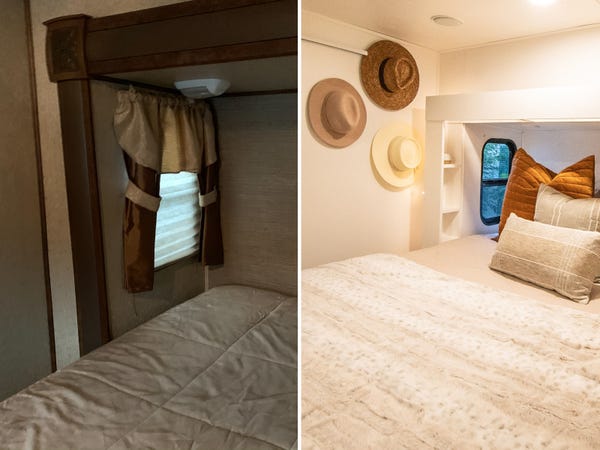 Ideally, they hope to buy some land and build a place.

"If we don't like it and it happens to be three months, it's very low risk because we paid off our debt," Adam said. "If we get to a year, great, because we were able to save a bunch of money in that year. So it's kind of a win-win scenario for us."

However, Adam says it wasn't a spur-of-the-moment decision and that he and Teighla put a lot of thought into the move. 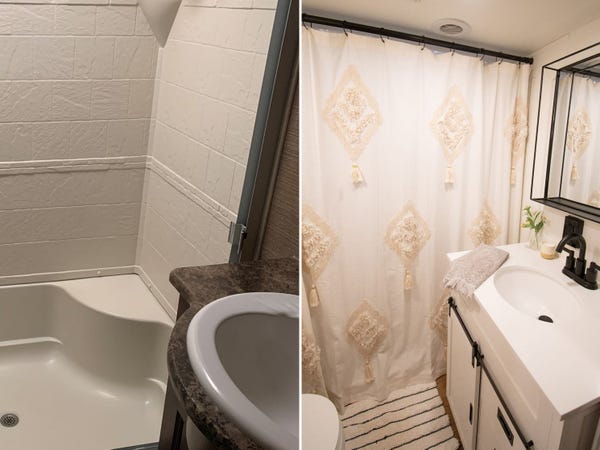 While Adam says that once he and Teighla made the decision to sell their place and buy an RV things happened fairly quickly, the decision itself wasn't made lightly.

"A lot of times people just see videos, 'Oh, family of five, sold their house and moved into an RV,'" Adam said. "And the perception is they just up and did it, they just made a rash decision and went for it, which is awesome if you can do that. But for us, there was a little bit more thought process behind it. We had to make sure it was right for us."