I was lost in the moment – hypnotised by the Pearl of Dorset twinkling gently in the gloaming.

From my breathtaking vantage point my gaze drifted along the beach, past the pastel-coloured beach huts to the small harbour and the 13th-century Cobb that Meryl Streep stood dramatically at the end of in The French Lieutenant’s Woman, putting Lyme Regis on the map for good.

Bliss had enveloped me. And for that I had David, the impressive general manager of the Rock Point Inn, where I was staying, to thank (ok, plus a glass or two of lovely rose). 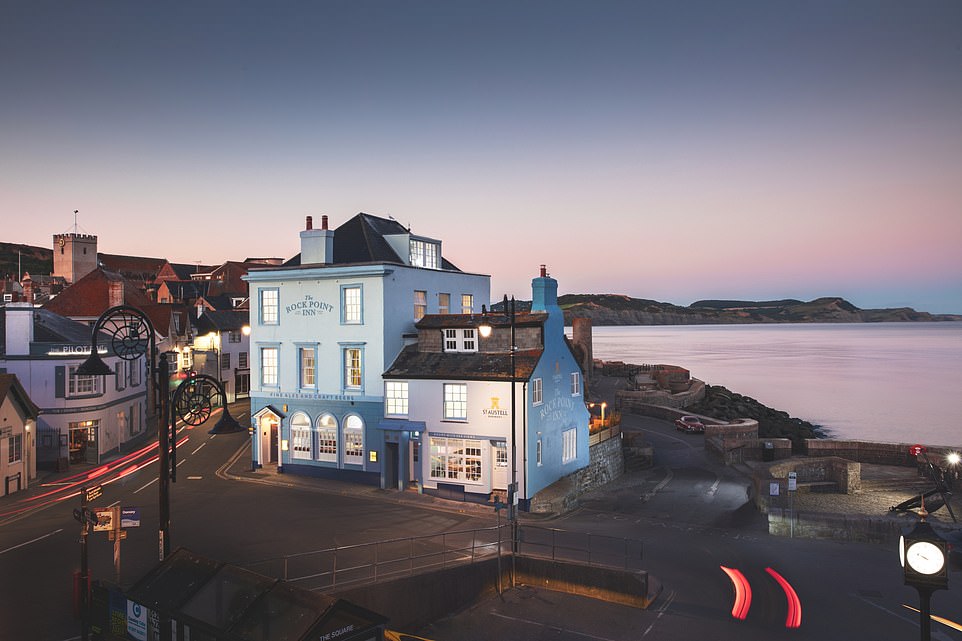 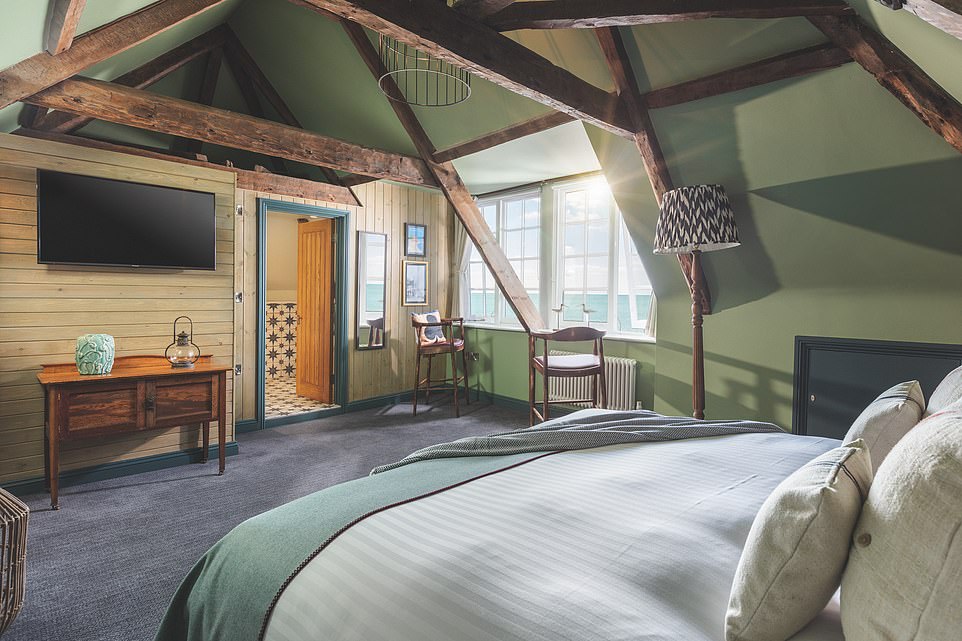 Ted’s deluxe king bedroom. The two chairs by the feature window mean guests can gaze upon the seascape and the Pearl of Dorset’s charms in comfort 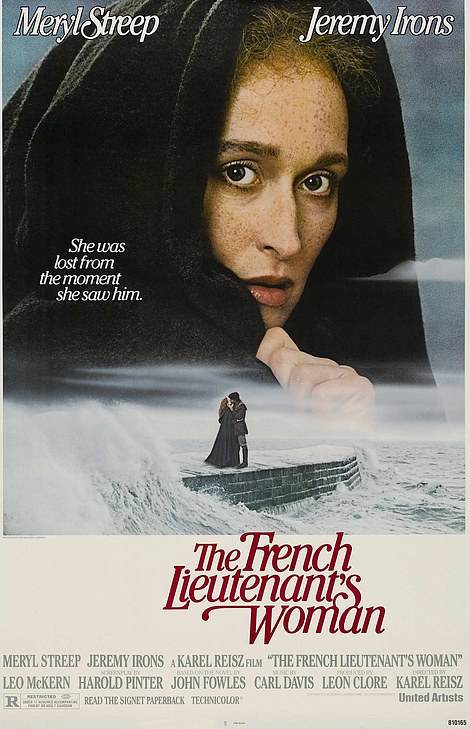 He told me he’d spotted that two chairs placed by the long sea-view window of our top-floor deluxe king/twin room were a bit too low for gazing activities.

He had them replaced with higher chairs – and now my partner and I were reaping the rewards.

I would recommend booking this room at the Rock Point Inn for the window-chair set-up alone.

But just in case that doesn’t do the trick, and since the St Austell Brewery, which owns it, went to the trouble of spending millions to restore this enticing 18th-century seafront tavern, which reopened in July, I’ll reveal a bit more about it – and the delightful town it’s located in.

My stay, with my partner and three-year-old daughter, was something of a nostalgia trip.

My dearly departed nan used to live in Axminster, just up a few miles inland, and a visit to Lyme Regis was a highly anticipated annual family outing in the 70s and 80s.

I remember loving the cute harbour and majestic Cobb, but most of all the calm swimmable bay and golden sand that forms a perfect arc in front of the town’s quaint buildings.

In my mind’s eye, in later years, the town always had a halo around it.

And what I found down memory lane was, thankfully, still utterly charming.

We strolled around the harbour – unchanged to my eye – and watched its contingent of small yachts and fishing boats bob in the water, sandcastles were erected on those golden grains and fish and chips from a gem of a seafront takeaway called Herbies were munched on the beach as we gawped at the dramatic fossil-rich cliffs that march eastward to Weymouth. 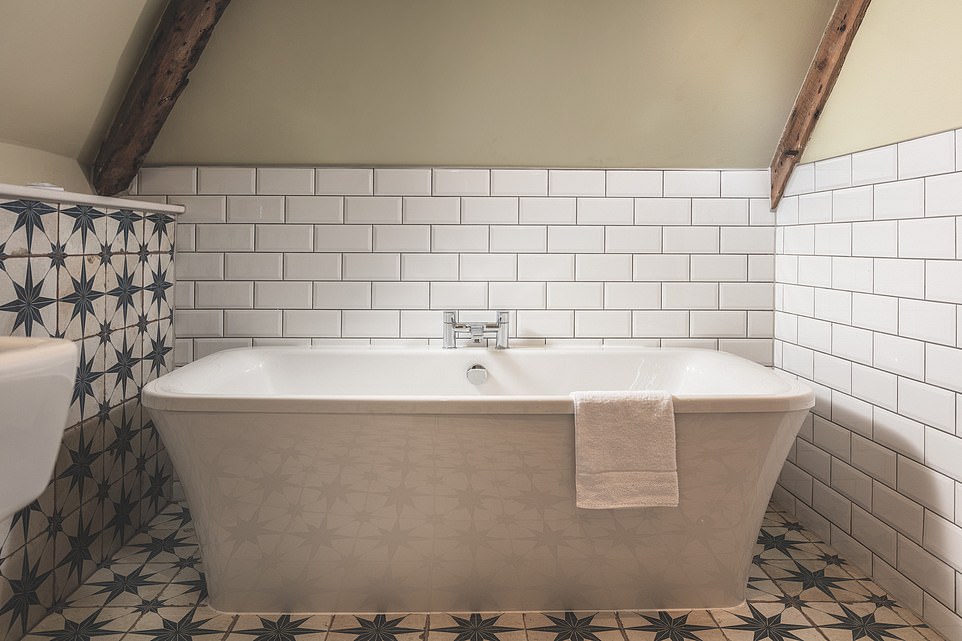 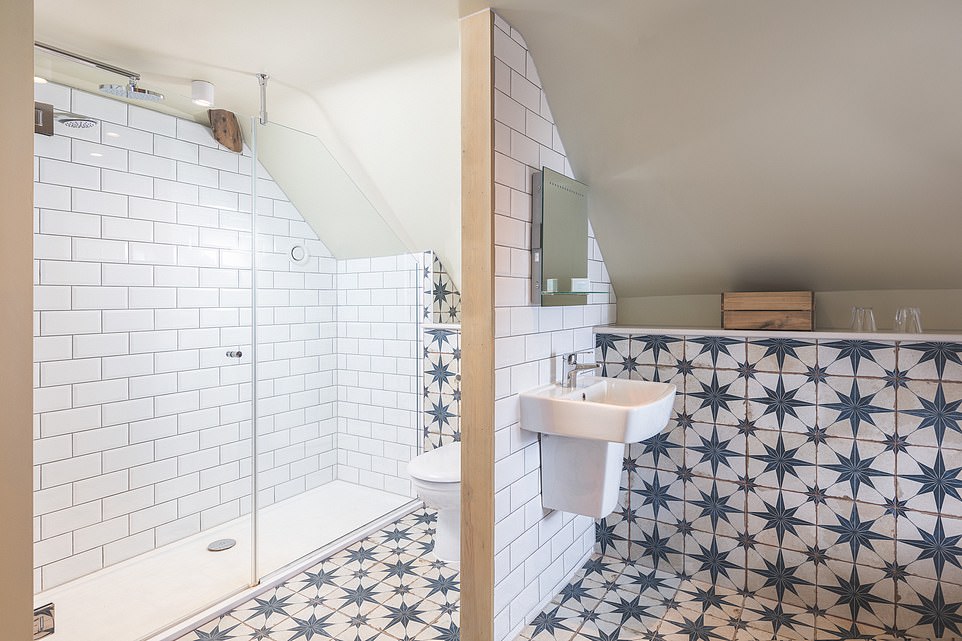 The deluxe king’s ensuite features classic sideways tiling and a rainshower, plus a smattering of exposed beam action 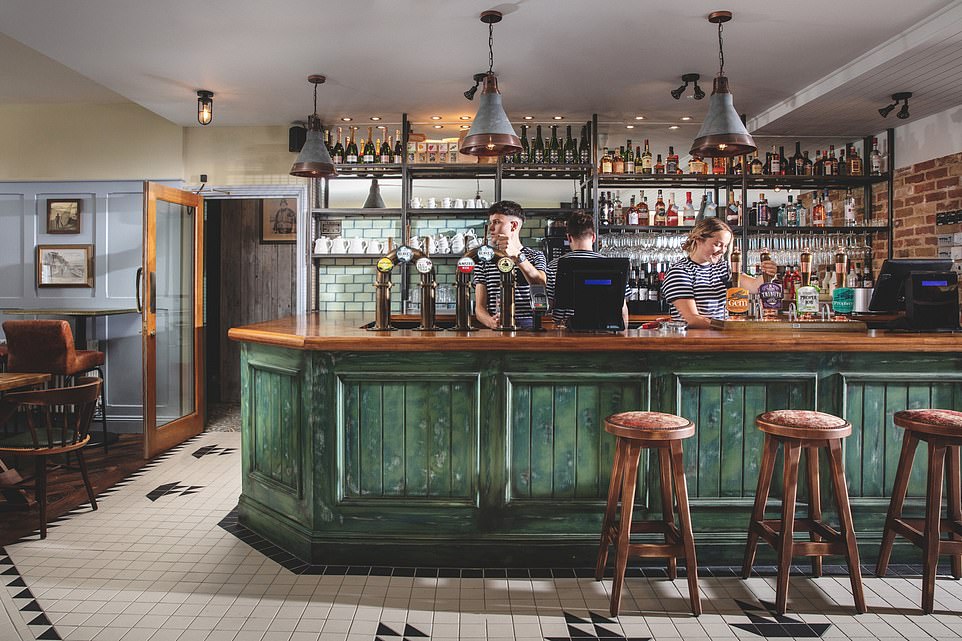 The bar at Rock Point, an inn with nine rooms located mere seconds from the beach

And its major claim to fame is that Mary Anning, born there in 1799, discovered nearby the skull, with the help of her brother, of one of the first dinosaur fossils to be described by science, according to the Jurassic Coast Trust. It was named an ichthyosaur, and Mary went on to form an international reputation as a fossil hunter.

(So more accurately Meryl Streep put Lyme Regis back on the map.)

With memory lane ticked off, it was time to inspect our lodgings – via the nearby Seriously Good Wine Company shop for rose acquisition.

The Rock Point Inn, a pub with nine rooms, occupies quite an eye-opening spot – at the mouth of the Lym River and probably just 25 footsteps from the beach. 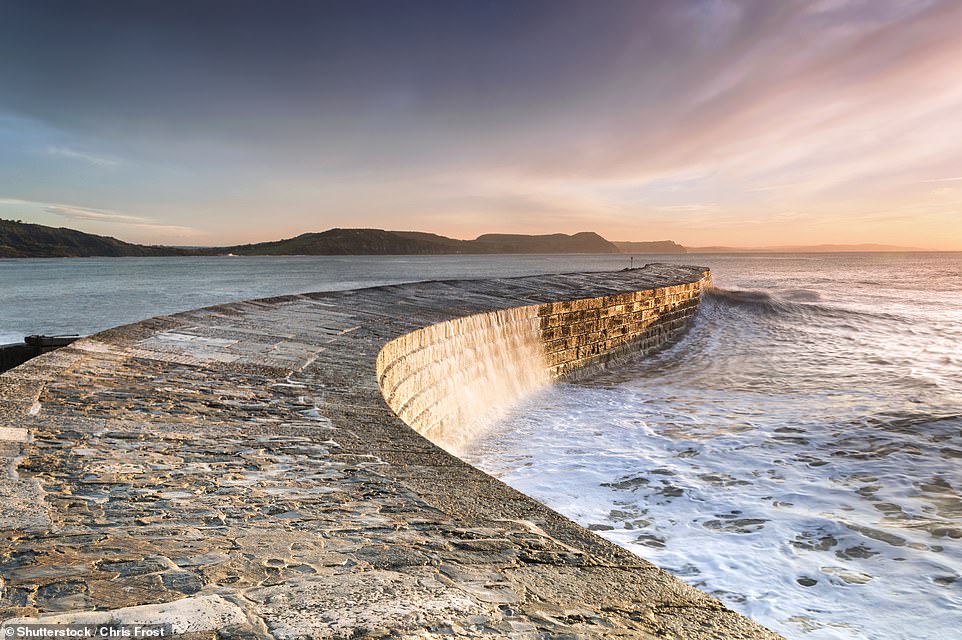 The Cobb has served as a breakwater in Lyme Regis since 1313. According to lymeregis.org, the earliest known drawing of it dates to 1539 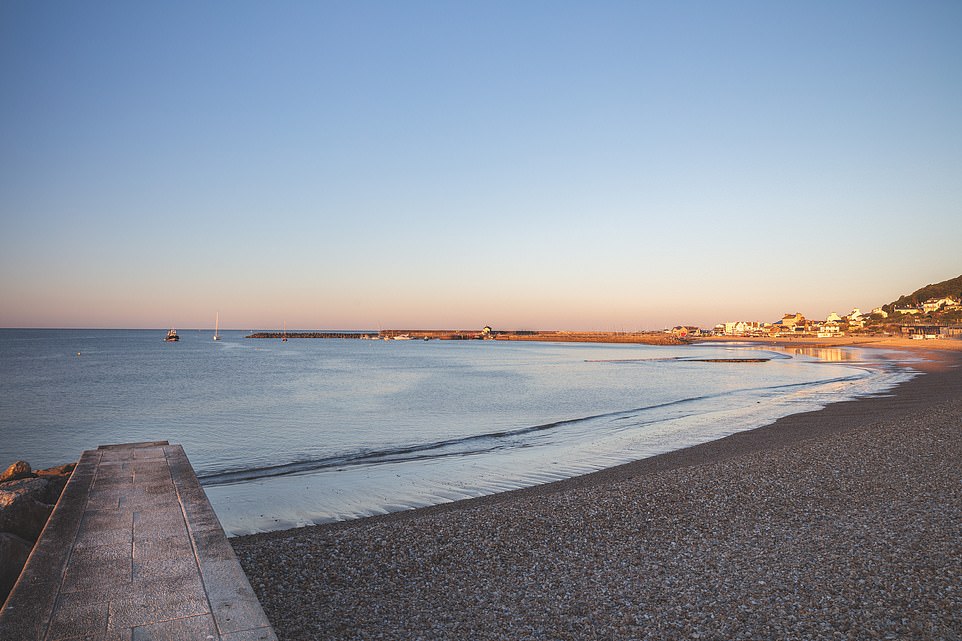 This picture was taken from just in front of The Rock Point Inn, looking towards the harbour and Cobb and the neighbouring sandy section of beach, which can just be made out on the far right 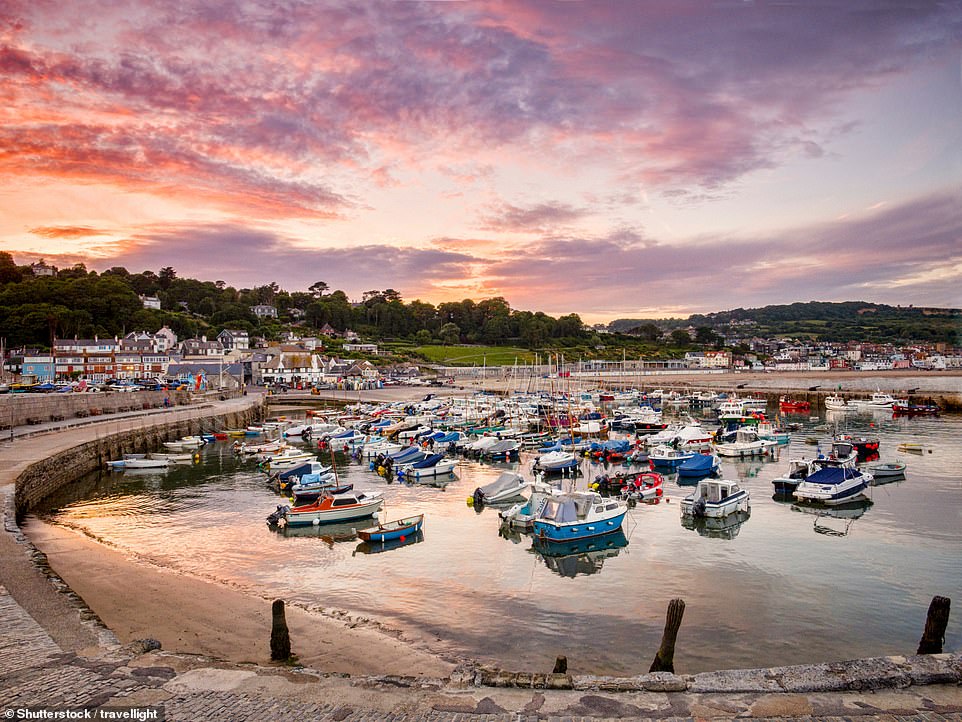 The pretty harbour is a top spot for a gentle stroll. And it’s here you’ll find the town’s excellent aquarium

FROM THE DOG THAT INSPIRED HOLLYWOOD’S LASSIE TO THE JANE AUSTEN CONNECTION: LYME REGIS THROUGH THE YEARS

The town was mentioned in the Domesday Book and received a Royal Charter from King Edward I in 1284.

A post box dating back to between 1799 and 1853 can be found on Coombe Street. It’s one of the oldest in the country.

Survivors from the torpedoed battleship HMS Formidable came ashore in 1915 in lifeboats and were taken to the Pilot Boat Hotel. The landlord’s dog, Lassie, is said to have licked one unresponsive sailor back to life. Lassie went on to become a celebrity and is said to be the inspiration for the Hollywood hound.

Jane Austen stayed in the town in 1803 and 1804 and partly set her last great novel, Persuasion, in it.

Mary Anning, born there in 1799, discovered nearby the skull, with the help of her brother, of one of the first dinosaur fossils to be described by science.

Beatrix Potter once stayed in Lyme Regis and is thought to have checked into what is now the Mariners Hotel. While there she worked on The Tale of Little Pig Robinson and made several sketches of the town.

The Cobb has served as a breakwater in Lyme Regis since 1313. According to lymeregis.org, the earliest known drawing of it dates to 1539.

The town was given a Victorian makeover for the shooting of The French Lieutenant’s Woman.

Sturdy defences spare it from the wrath of stormy seas, but in days of yore its south-facing wall was the defence.

So it was built fortress-thick.

During the refurbishment it was decided that a big window should go in it – and it took workmen six days to cut a hole in the stonework.

But they left plenty of time in the schedule, it seems, for reworking the rest of the interior, which is homely from top to bottom.

Our boutique-y bedroom – ‘No7’ – was wonderfully inviting. Big, with a vaulted ceiling, but still cosy, thanks to a huge comfy bed with multiple pillows and cushions, exposed beams and soothing pastel tones.

And let’s award bonus points for the nautically themed balustrade and stair handrail made from thick rope and handily placed plug sockets – by the bed on both sides and by the sea-view window, to eliminate the possibility of a dying battery thwarting a quick Instagram upload. 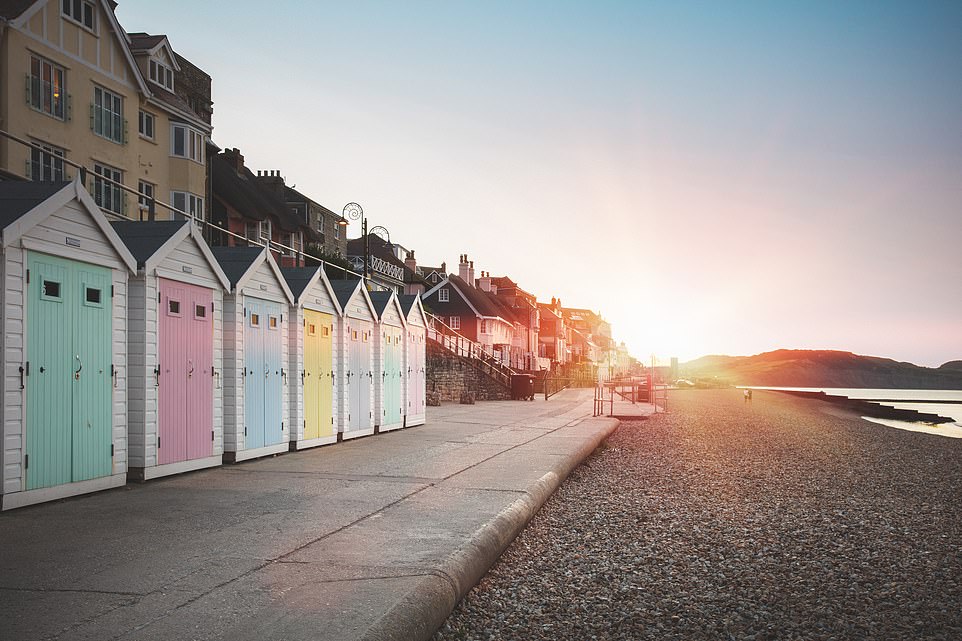 The view from the cute beach huts towards The Rock Point Inn, which is lost here in the glare of the rising sun 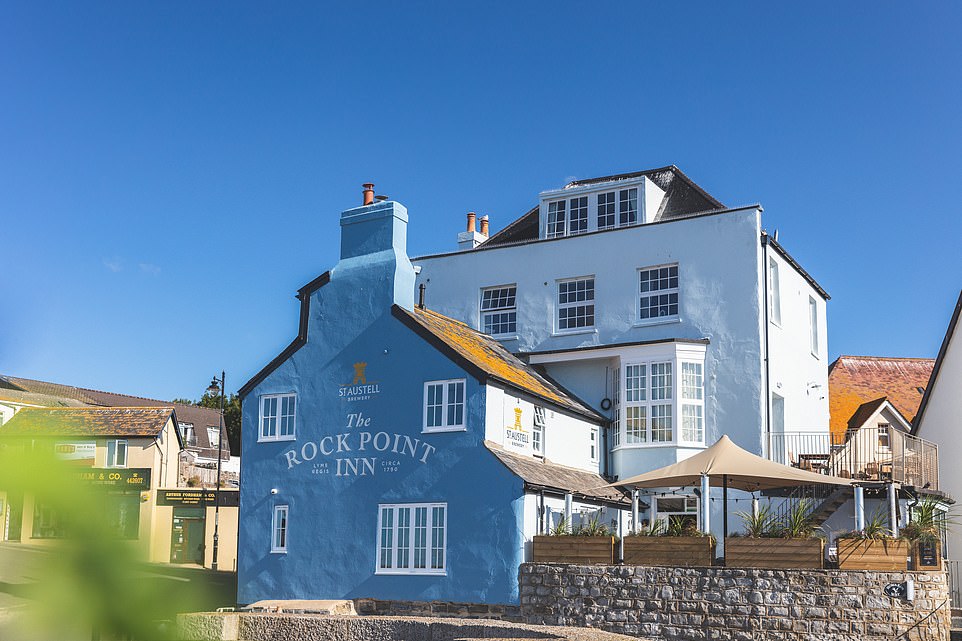 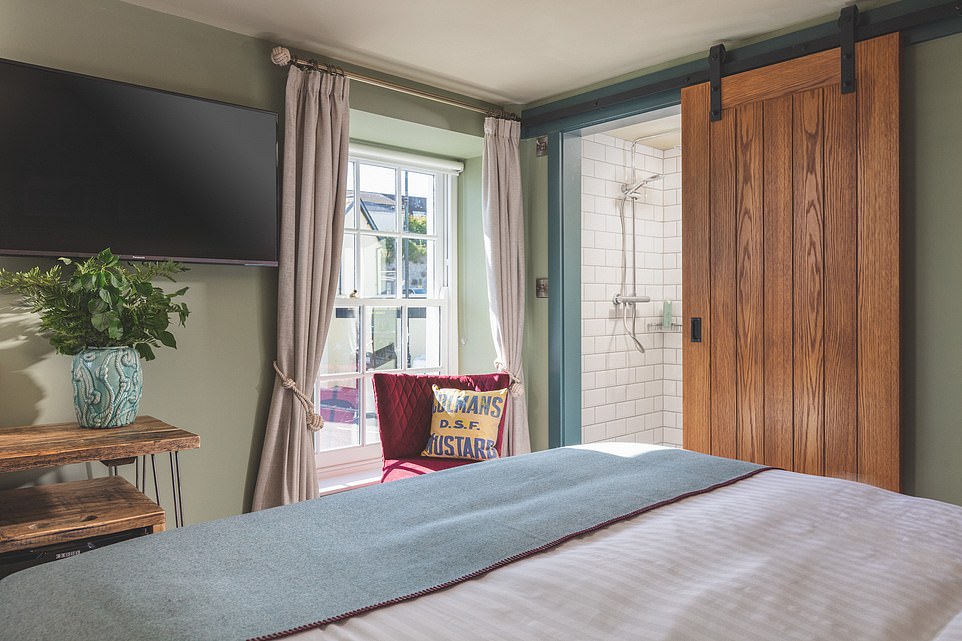 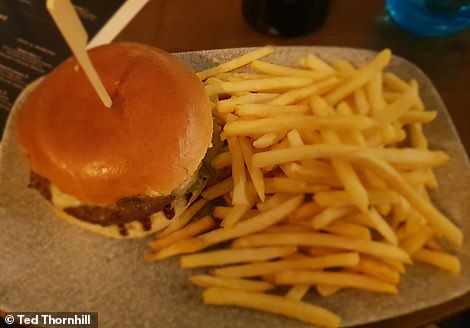 Ted says that the only slight wobble was the food – but partly because the rooms set the bar so high. Pictured left is his full English and right his burger and fries. Both tasty and comforting, but standard, he says, compared to the gourmet accommodation

We had a peek at a few of the other rooms while they were being cleaned – Guncliff, Lynch and Somers – and they were smaller, but similarly beguiling.

Downstairs David and his consistently chirpy, helpful and efficient team ensure you always feel looked after and there are more sea views to be lapped up on the terrace, where we had breakfast. Come winter, the bar room with the new window will become the prime spot I’d imagine, thanks to its wood-burning stove.

The only slight wobble was the dining, but partly because the rooms set the bar so high.

I had a comforting burger with fries for dinner with a good French red wine (Chateau Sergant) and a tasty, nicely presented full English the next day. But there was no wow factor – standard fare compared to the gourmet accommodation.

All the same, we have vowed to return to Rock Point Inn – a pub that definitely brightens the Lyme Regis halo.

Ted was hosted by Rock Point Inn and St Austell Brewery. For more information, or to book a room, visit www.rockpointinn.co.uk or call 0345 2411133. Axminster is the nearest railway station to Lyme Regis. It’s advisable to book ahead for a taxi. MailOnline Travel recommends using Causley Cabs, run by husband-and-wife team Neville and Sarah Causley. The inimitable Neville will give you all the Lyme Regis highlights during the 15-minute journey. Visit www.causleycabs.co.uk or facbook.com/causleycabs or call 01297 642011.