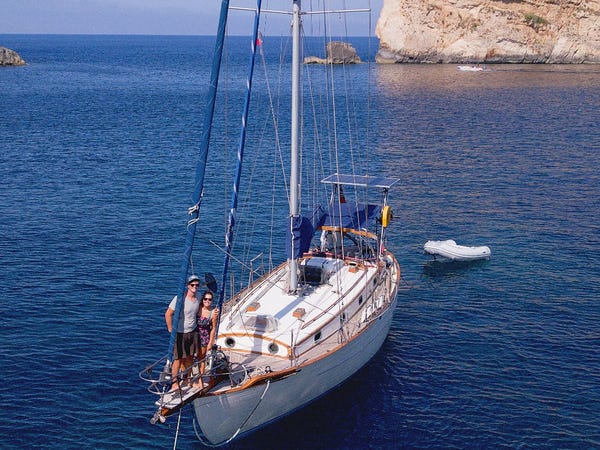 Living on a sailboat and traveling the open seas may seem like a dreamy life, but there are limitations. Elena Manighetti and Ryan Osborne know that better than anyone.

The couple has been living on their sailboat for three years, traversing the Atlantic Ocean, battling hurricanes, and dealing with the fallout of the coronavirus.

Despite the challenges, Manighetti and Osborne love their life on the seas and call the tiny house on the water their "little home."

Elena Manighetti and Ryan Osborne were living in a rented apartment in the UK when they took a trip to Mallorca, Spain, that changed their lives forever. 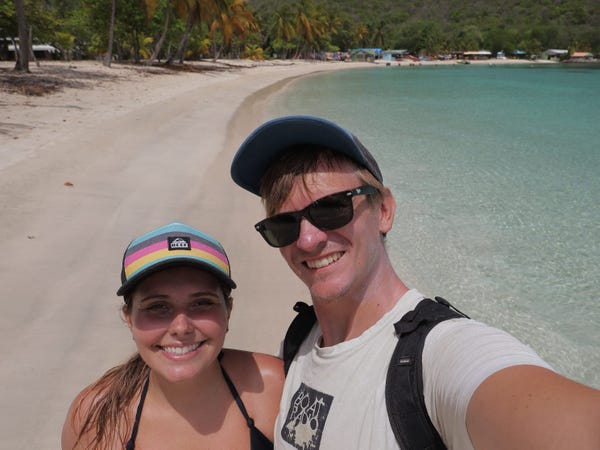 While on vacation, the couple realized they didn't want to return to their jobs in civil engineering and marketing. Instead, they wanted to extend their trip forever.

"We wanted to live an adventurous life," Manighetti said. "We really wanted to be in nature and to be traveling."

While on the trip, they started brainstorming ways to live an alternative lifestyle where they weren't counting down the days to retirement.

"We started talking alternatives, like could we get a van or could we get a tiny farm to be self-sufficient but we wanted to go to foreign places and see places far away," Osborne said.

While in Mallorca, they saw sailboats sitting in one of the bays, and they had a light bulb moment.

"We really love being on the ocean so it made sense," he said. 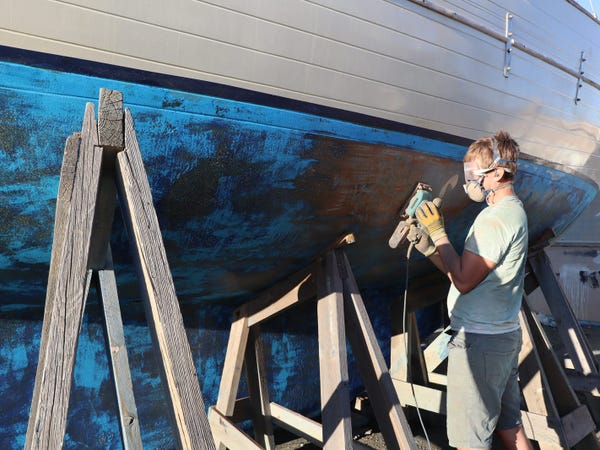 After a year of planning and saving, the couple did some repairs to their boat and then departed from England in 2017.

"It was equal parts being super anxious and also super excited," Manighetti said. "My sailing experience mounted to a single course that we did in a weekend. It felt overwhelming the amount we needed to learn and get used to. But overall, we were incredulous about actually leaving. It felt like an impossible thing to achieve, and yet we did it in a year."

Slowly, they got the hang of things. At first, they sailed from the UK to France, Portugal, and Greece.

During their travels, they traded in their catamaran for a 37-foot Tayana from 1976, which they now call home. 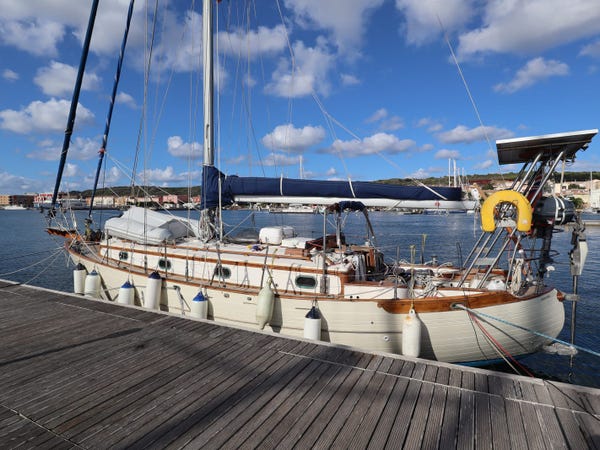 Osborne said the exterior is often mistaken for an old wooden boat, but it's actually made of fiberglass.

"It's an old-fashioned, traditional-looking boat," he said. "It's a very heavy boat, but it's built for off-shore passages and going to really remote places."

At the back of the boat, there's the cockpit, which is where Osborne and Manighetti spend most of their time while outside. 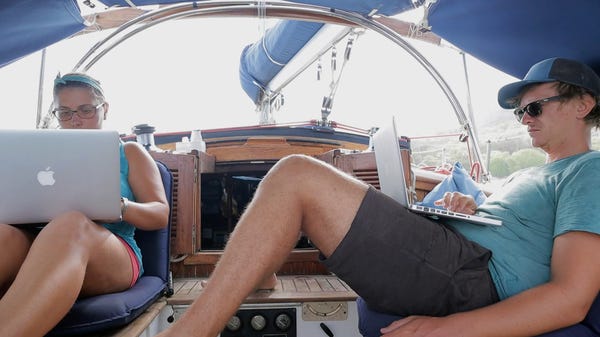 The front of the boat is where the couple usually drops their anchor, but the cockpit is where they usually hang out and relax.

Below deck, their cozy bedroom is at the front of the boat. 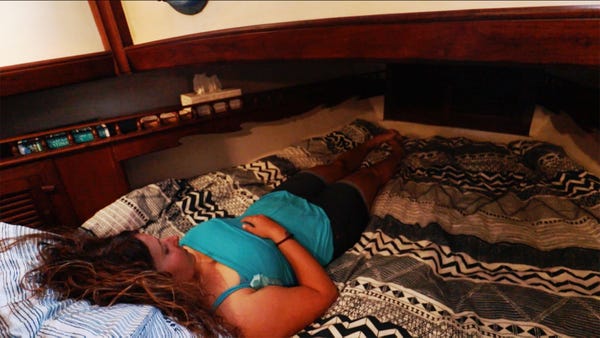 "It's a decent size, but it certainly doesn't have a king-size bed," Osborne said.

Next to the bedroom, there's a bathroom, which is called the head. 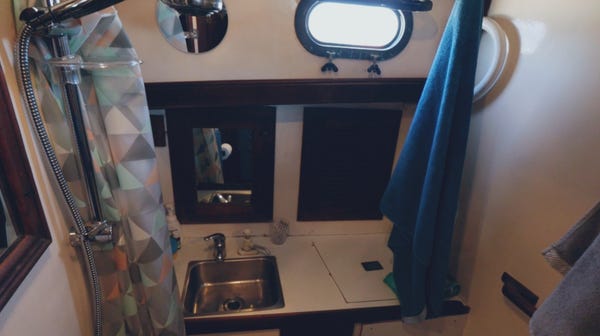 The bathroom has a composting toilet, a shower, and a lot of storage. Since they have to focus on conserving water, they have to take brief showers.

In the saloon, there is a large U-shaped sofa, "which is where we would be hanging out, especially if we're somewhere with colder weather," Osborne said. 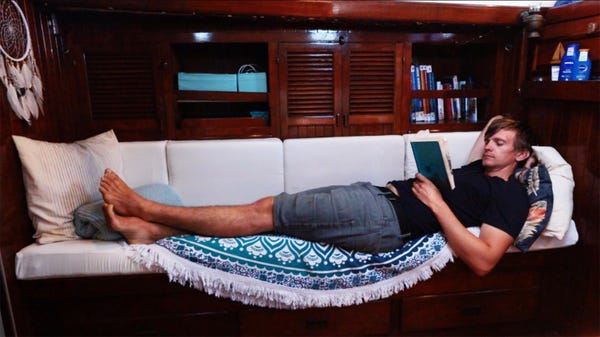 "It's very cozy inside," he said. "[There's] lots of varnished, dark woods. You can really escape from the world down here. It's a great place to escape from the feeling of sailing."

In the back of the boat, there is a galley and a table where the couple maps out their journey. 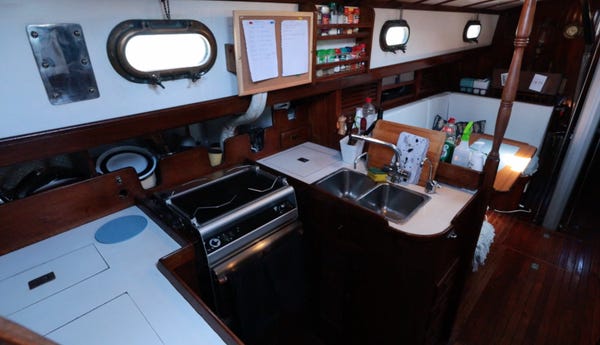 There's "a surprising amount of planning" when it comes to everyday tasks.

In early 2020, after getting acclimated to living on the water, they started a 25-day journey across the Atlantic Ocean, which was "both challenging and boring." 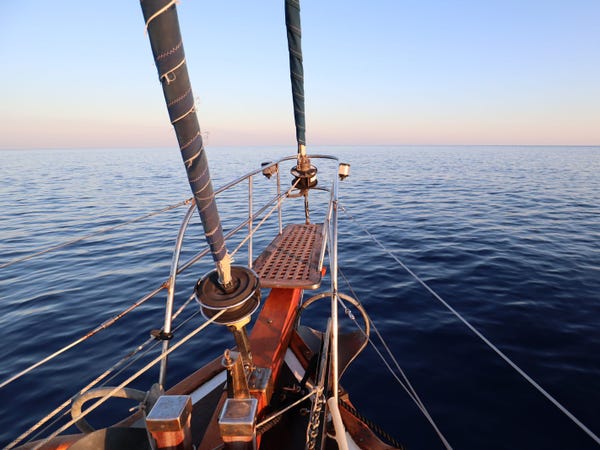 "It was mostly a bit boring," Osborne said. "You mostly just sat looking at the sea. You're generally a bit tired and a little bit bored."

Osborne explained that he and Manighetti had to work in shifts to get to the Caribbean islands. Since someone had to keep an eye out 24/7, one would stay in the cockpit for three hours while the other catches up on sleep, and then they would swap.

"At the same time, there are some great vistas," he said. "There's nothing else to do but sit and chat."

Manighetti added that they would often sit and have "meaningful conversations about life and the future." But she said she was "absolutely exhausted" because she can't really sleep when the boat is in motion. Since they were traveling for 25 days straight, she didn't get much sleep.

On the 15th day of their cross-Atlantic journey, they started hearing about ports closing but couldn't understand why. 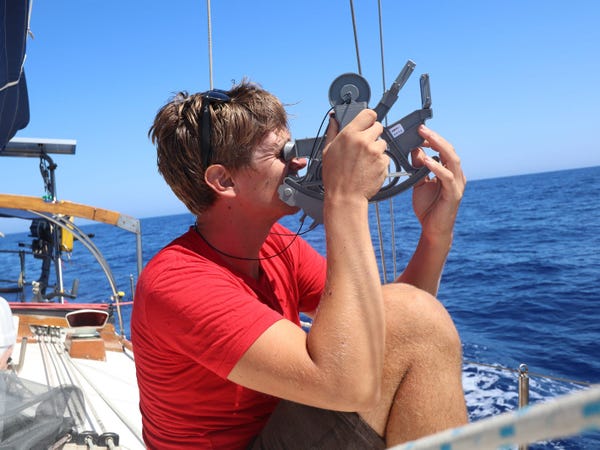 When they left Europe, they knew the coronavirus was in Asia, but it seemed to be isolated there, so it was barely on their radar. However, before Manighetti and Osborne left, they told their family not to give them any bad news because they wouldn't be able to do anything about it while in the middle of the ocean. Therefore, their family gave them very few updates on the coronavirus.

"On day 15, we started hearing that a few islands had closed their borders," Manighetti said. "It was really hard to understand at the time. Without all the facts, it was really hard to grasp what was happening. There was absolutely no way we were expecting a pandemic."

On day 25, March 25, they arrived at the Bequia island in the Caribbean and started reading the news for the first time.

"When we landed, we read on the BBC website that there were thousands of deaths, and we were like, 'Oh my god, that many deaths?'" Manighetti said. "To learn that it was worldwide was shocking. It took us a few days to catch up with what happened throughout our crossing."

Now it's very difficult for the couple to island hop as they'd planned — when they moved islands once, they had to quarantine for 14 days. 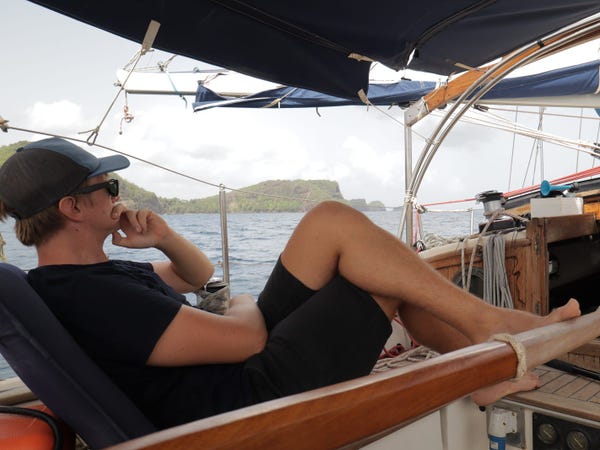 The first few weeks were filled with anxiety. When they first landed, they were very nervous about the food supply. There were rumors that the food would be cut off from the islands to stop the spread of the coronavirus. If that happened, the locals would be prioritized, meaning Manighetti and Osborne would be without a food supply. Luckily, that didn't happen and life on the islands has remained relatively normal.

"The main difference is that you can't move between countries very easily," Osborne said.

With the arrival of hurricane season, the couple faces a new set of challenges that are compounded by the issues created by the coronavirus. 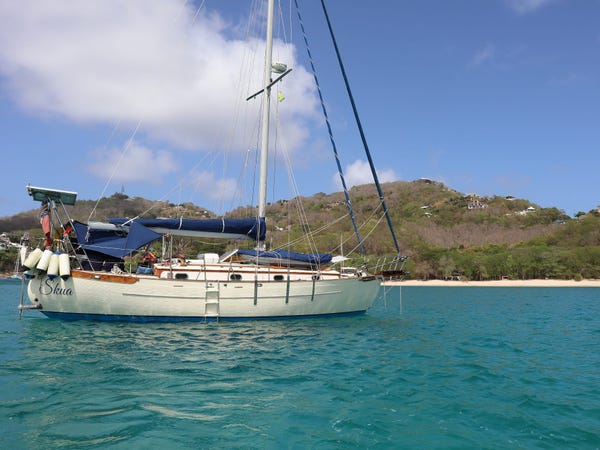 In July, Tropical Storm Gonzalo hit the Caribbean and the couple had no place to go.

"What you would normally do is sail south of the storm because tropical storms and hurricanes normally curve away from the equator," Osborne said. "You'd normally travel to Trinidad or the southern end of Granada and then the storm would pass the north of you. But that really wasn't an option because Trinidad wasn't allowing people into their country, so it made it really difficult."

Manighetti and Osborne had to instead make some very "difficult and stressful" decisions. In the end, they decided to dock their boat at the luxury yacht club at the island they were at and hope for the best. It took them a full 24 hours to prepare the boat for a direct hit by stripping it down completely. They planned to hide in the bathroom of the marina when the storm actually hit.

Luckily, the storm passed and their boat survived unscathed.

"We are immensely lucky," Osborne said.

Living on a boat, Osborne and Manighetti are always susceptible to weather conditions, especially during hurricane season. 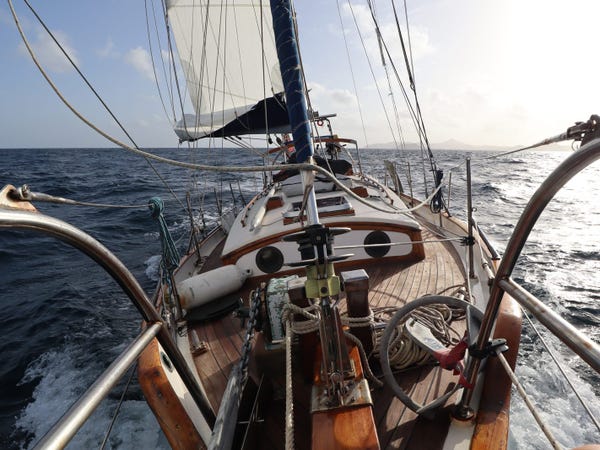 "Sailing in fog is horrible in an unexplainable way," Osborne said. "We kept hearing engines of fishing boats but we had no way of telling where they were. We were just hearing these noises in the fog. If we were hit by a fishing boat, our boat would be destroyed and we probably would both die."

Manighetti added, "We are free to go where we want but we need to decide based on the weather … There is a lot of limitations that you would never have on land."

Due to the pressures of hurricane season mixed with the coronavirus challenges, Manighetti and Osborne have decided to take a break from sailing for the season. 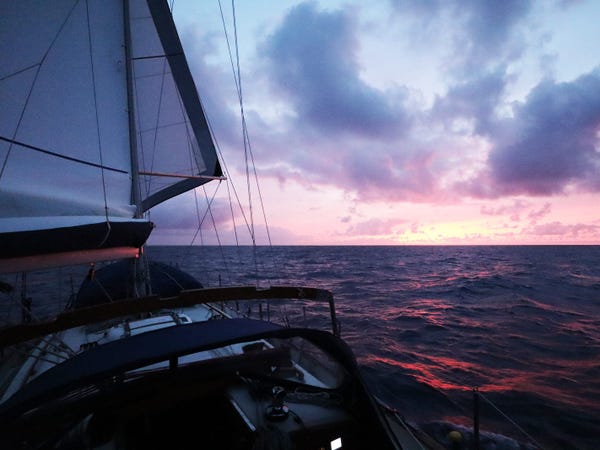 After saving up money, they plan to fly home to the UK or to fly the US to wait out the season.

"We really do love living on the boat, but the hurricane season has been fairly tough," Osborne said.

However, they love life on the water and plan on returning to the boat after the season to continue living on it long term. 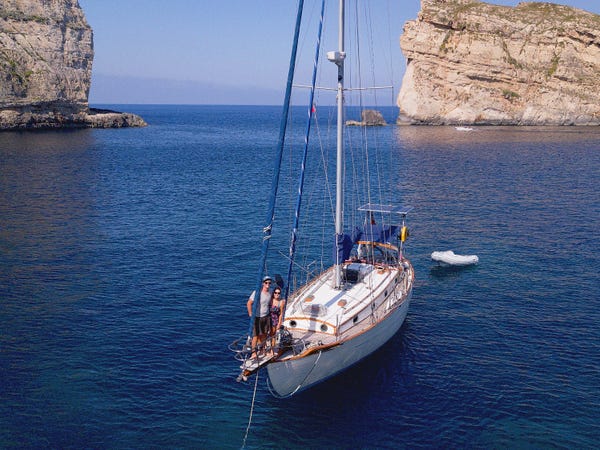 "It feels like we won the lottery, this being a reality for us," Osborne said. "The boat symbolizes the freedom of being able to go where we want to. Essentially, it's our little home."

Do you live in a tiny house, RV, camper van, or other unusual housing structure and want to share your story? Reach out to Frank Olito at [email protected]