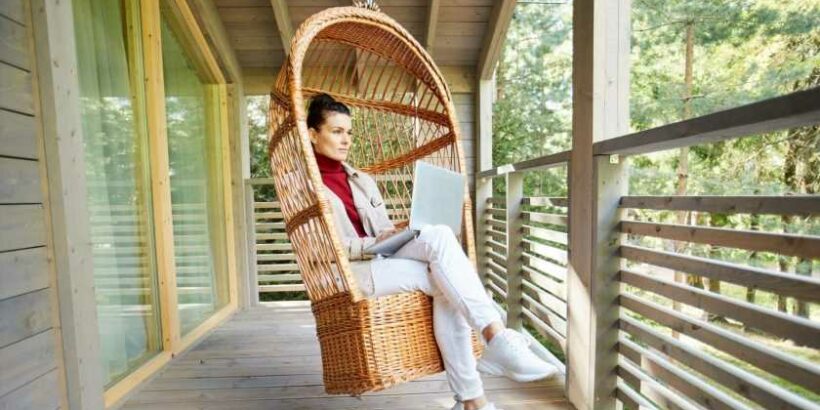 “The line between travelling and [just] living is blurring,” says Airbnb boss.

We’ve all had to find new ways to work over the last year. From setting up home offices, to wearing a face mask all day, and even changing jobs because of redundancies – most people’s working lives has been affected.

As we start to return to offices and a more familiar way of working, there’s been a lot of discussions around the future of work being more flexible, with many companies adopting a rotational office while others continue to let people WFH fulltime.

And Airbnb has just shared another flexible working trend, which might divide people’s opinions.

Airbnb chief executive, Brian Chesky, has said that people are increasingly using the rentals platform for remote working opportunities rather than just holidays, and they are choosing longer lets in large houses in rural areas.

“Everyone is going to live a bit differently because they have more flexibility and are less anchored to the city,” Chesky told BBC News on Tuesday 25 May.

“The line between travelling and [just] living is blurring,” he added. “Rural nights booked in the UK used to be a quarter of our bookings, they’re now half.”

It makes sense, right? If you don’t need to be working 9-5 in the office, you might as well change up the scenery and head somewhere relaxing with your laptop. That perhaps helps to explain why Airbnb reports that Cornwall is the UK’s most-booked summer location in 2021 (a title previously held by London).

But does this mean that the line between a holiday and a remote working stint is becoming blurred?

Would you rent a property by the sea to work remotely in?

Chesky argues that it’s just a new way of living for a growing number of people, thanks to flexible work policies: “The idea might now appeal to people other than just millennial, digital nomads with few personal responsibilities.”

Admittedly, the idea of swapping a home office in a tiny London flat for a rural cottage by the sea for a few days sounds very appealing. But it shouldn’t be considered a holiday.