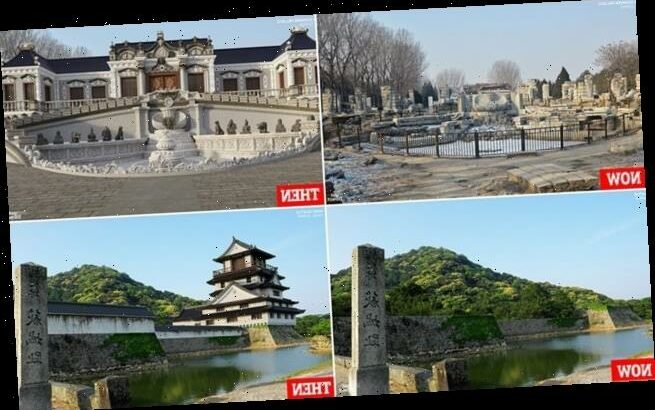 From the ‘Versailles of the East’ to the ‘Machu Picchu of Japan’, stunning Asian castles restored to their former glory by digital wizardry

Ancient history has been pinged forward in time to the present day – thanks to some cunning digital wizardy.

Six of Asia’s grandest castles have been restored to their former glory by a collaboration between Budget Direct and a team of digital CGI masters, researchers and architects.

Here we present the fruits of their labour, the ruins of castles from Iran to Japan via China and Afghanistan rebuilt before your very eyes…

Hardly any remains are visible of Alamut Castle in Iran, which dates back to the 9th century and entered legend in 1090 when Hassan-i Sabbah conquered it 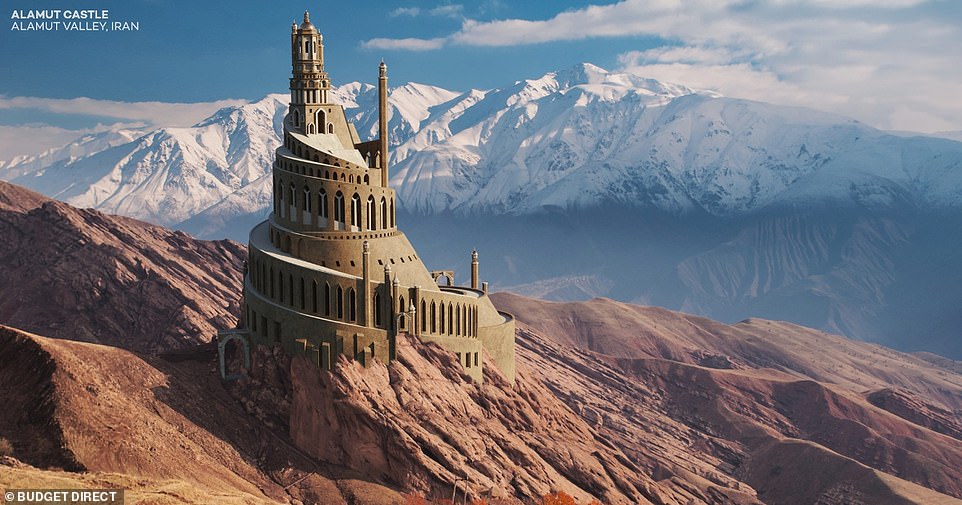 Over the years, Alamut Castle was destroyed piece by piece by various conquerors, including the Mongols, who tore down its extensive library

Alamut Castle in Iran dates back to the 9th century and has had a very colourful history.

It entered legend in 1090 when it was conquered by Hassan-i Sabbah, who had seized control of the nearby village of Qazvin. As the residents of Qazvin staffed the castle, he was able to oust its ruler without any blood being shed.

He consolidated his power by ordering his followers to kill leaders of enemy groups. These followers were derogatorily called ‘Hashashin’, which gave birth to the English word ‘assassin’.

Over the years, the castle was destroyed piece by piece by various conquerors, including the Mongols, who tore down its extensive library. Hardly any of the castle remains today, although the Iranian government is attempting to partially restore it for tourists. 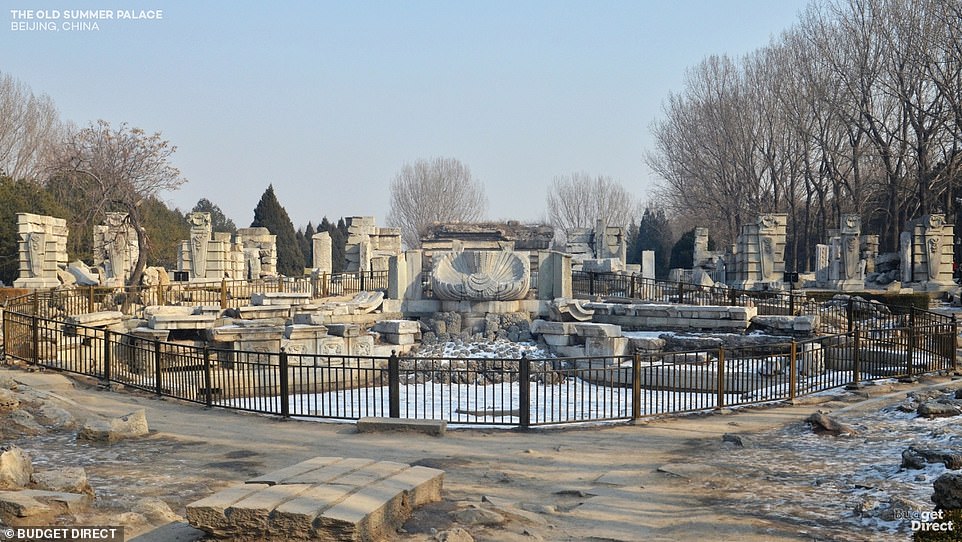 All that remains of Beijing’s Old Summer Palace, which was a 3.5-square-kilometre- (1.3 sq mile) complex of palaces, lakes, gardens, towers and sculptures 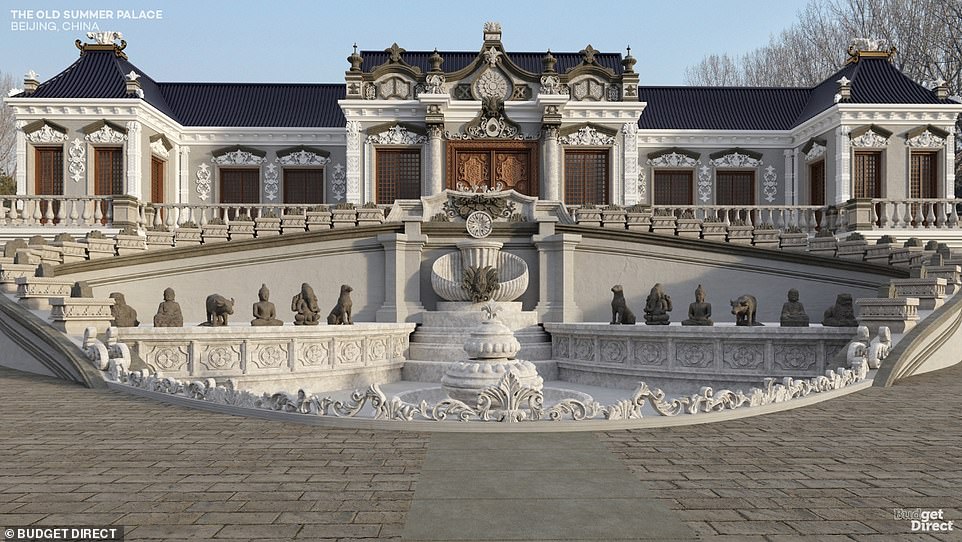 Beijing’s Old Summer Palace – or Yuanming Yuan – was once one of the grandest constructions on the planet, known as the ‘Versailles of the East’.

The complex, built by the Qing Dynasty, was spread over 3.5 square kilometres (1.3 square miles) and contained hundreds of palaces, lakes, gardens, towers and sculptures.

It was much loved by the Qing Emperors, but in 1860 it was largely destroyed and looted by British and French forces in retaliation for the death of a British envoy during the Second Opium War.

The palace suffered further damage during the Boxer Rebellion (1900) and the Cultural Revolution (1966-1976) and only a few outbuildings remain.

The reconstruction above shows the Haiyantang (The Palace of Calm Seas) part of the complex, with a seashell fountain as the centrepiece.

Hagi Castle was built by the Mori Samurai, with the permission of the Tokugawa Shogunate, who had triumphed over them in the Battle of Sekigahara

This once-magnificent castle rose from the ashes of battle.

When the Mori Samurai clan lost the Battle of Sekigahara – and much of their land as a result – the triumphant Tokugawa Shogunate granted the Mori permission to build a new castle in the small seaside city of Hagi, perhaps because this would keep the enemy clan pinned by the coast.

The Mori, however, eventually got their revenge. The castle became the capital of the Choshu Domain, whose support was instrumental in the eventual overthrow of the Tokugawa Shogunate during the Meiji Restoration.

Ironically, the castle was dismantled by the new government in 1874 as part of a policy of centralisation and modernisation. Peculiarly, the bulk of Hagi was built at the base of Mount Shizukiyama rather than on higher ground. Nevertheless, it was quite formidable in its day. Multiple baileys and walls protect the surrounding land, many of which can still be seen.

The main wooden keep was dismantled, but its stone base and part of its moat endure. Higher up the mountain, the remains of a fallback keep can be found. The castle town still stands as a charming world heritage site.

Citadel of Ghazni, Ghazni, Afghanistan – built in the 13th century

Ghazni is Afghanistan’s only remaining walled city, and an important economic centre. The remains of the Citadel sit on a hill in the centre of the old city walls

This 150ft- (45m) high fortress has been captured by a long list of history’s VIP conquerors, including the Mongols, Timur (Tamerlane), and the Mughals.

The Citadel’s conquest by the British in 1839 was instrumental in ending the First Anglo-Afghan War. It was also used as a military base by America after 2001.

Today, Ghazni – which sits at an elevation of 7,300ft (2,225m) and dates back to possibly the 7th century – is Afghanistan’s only remaining walled city, and an important economic centre. The remains of the Citadel sit on a hill in the centre of the old city walls. However, neglect, war, and weather have heavily damaged both. Fourteen of the original 32 towers have collapsed, including one as recently as 2019. Today, Ghazni’s walls, towers, and Citadel are in danger of being lost to the winds of time for good.

The British East India Company bombarded and destroyed Raigad in 1818, and the ruins have yet to be fully mapped by the Indian government

The main entrance to this castle sits at 820m (2,690ft) above sea level and visitors can climb 1,737 steps to reach it. Or take an aerial tramway. Once there, they’ll discover an impressive structure that dates back to 1030 AD.

It was conquered by Shivaji Maharaj in 1656 and he set about expanding it, eventually declaring it his capital.

The British East India Company bombarded and destroyed Raigad in 1818, and the ruins have yet to be fully mapped by the Indian government.

Visitors can still see the remains of two of the three watchtowers and a famous wall named Hirakani Buruj. Raigad also contains several reservoirs, stone stalls for merchants, and open ground for the celebration of the Holi Hindu festival. The main palace, however, was built of wood – only the bases of its pillars remain. 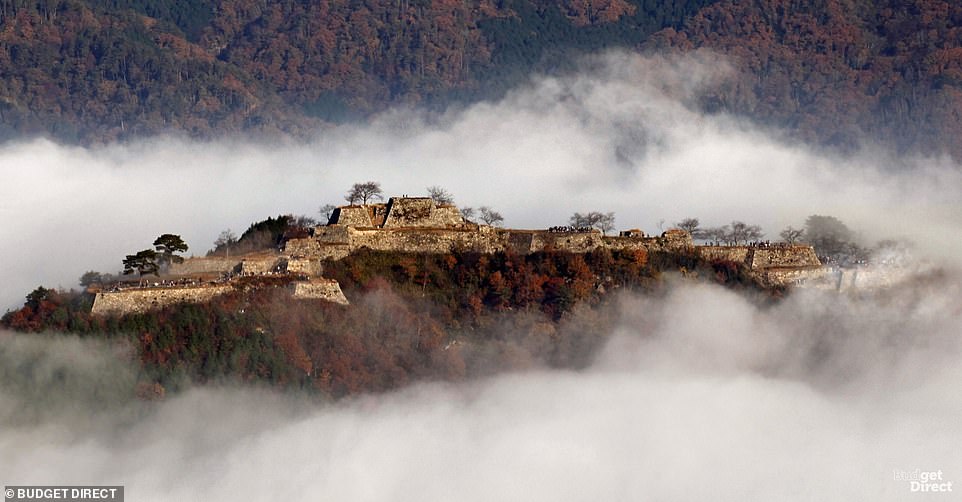 Tourist attraction: Takeda Castle is often described as the Machu Picchu of Japan

The castle sits on a mountain ridge at an elevation of 353m (1,158ft) and affords visitors magnificent views

The ruins of Takeda Castle, in Asago, sit on a mountain ridge at an elevation of 353m (1,158ft) and afford visitors magnificent views.

This, combined with the way they’re staggered over several levels, has led some to describe the site as ‘the Machu Picchu of Japan’.

Visitors can explore the castle via a one-way trail – and there are temples associated with the site at the base of the mountain.

To see the original research for these reconstructions visit www.budgetdirect.com.au/blog/asian-royalty-6-ruined-castles-across-asia-reconstructed.html.