The 90-minute drive from Tucsonto Rancho de la Osa, a recently reopened dude ranch on the border with Mexico, is a lonely one. Turning onto Highway 286, your car may be the only southbound vehicle for 44 miles while the occasional U.S. Border Patrol van trolls north. The road runs directly to the border fence, here made up of eerie metal posts spaced less than a foot apart, at the town of Sasabe. Minutes before reaching it, a right turn onto a dirt road delivers you to the historic adobe ranch, painted a warm terra cotta, with a porch lined with turquoise Adirondack chairs.

“You got the right place, and we got the right horse,” said a cowboy in the driveway, when I pulled in last winter, fully living up to wrangler stereotype with a handlebar mustache and weathered 10-gallon hat. 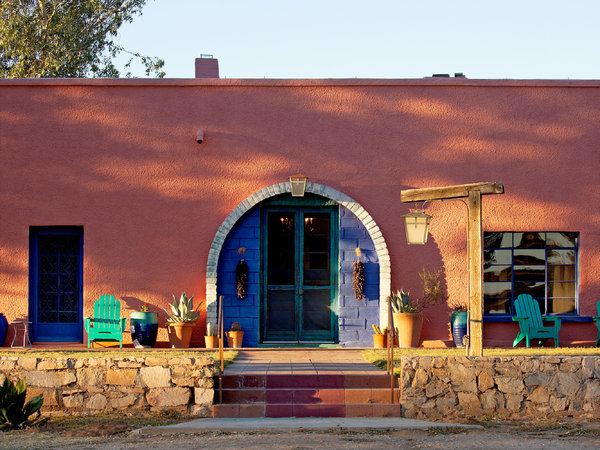 Once, the border fence was such a strong deterrent to visitors that it helped drive the 1920s dude ranch out of business. But, if anything, President Trump’s campaign for a border wall has helped revive interest in a region that already has a barrier at the border.

“Like Trump or hate Trump, now the border is an attraction,” said Russell True, who with partners, bought Rancho de la Osa at auction complete with its vintage western furnishings and period art in late 2016. They don’t publicize the ranch’s proximity to the border fence and had hoped the border would be a neutral feature of the ranch. Instead, Mr. True said it has piqued the interest of guests.

“The first thing they want to do is see the wall,” he said. “We could not have planned for the political shift and that it would become interesting.”

Originally opened in the 1920s, Rancho de la Osa drew many celebrated guests, including Joan Crawford, Cesar Romero and John Wayne, for whom three of the 18 bedrooms are named (double room rates from $235 a person, all inclusive). The cowboy actor of the silent film era, Tom Mix, made one of his many films here. Authors checked in too, including the western novelist Zane Grey and Margaret Mitchell. Presidents Franklin D. Roosevelt and Lyndon B. Johnson led the political A-list along with William Clayton, who drafted the Marshall Plan to aid European countries after World War II in a two-bedroom house on the property.

More current events also helped drive the ranch out of business, according to Mr. True, who also co-owns White Stallion Ranch near Tucson. In 2010, Jan Brewer then the governor of Arizona, decried beheadings in the desert she said were linked to illegal immigration and drug trafficking, allegations that were never corroborated and that she later called an error on her part.

“We just had an absolute, possibly even slightly irrational need to save it,” Mr. True told me as we sat in the main lodge, where the adobe walls are washed in orange, red and yellow hues and an antique leather sofa is embossed with an image of a saddle. “Somebody else would have bought it, but nobody else was going to run it as a dude ranch.”

As a dude ranch, the 590-acre Rancho de la Osa, restored and reopened in 2017, offers more than vintage charm. Beyond the central compound, which includes an outdoor swimming pool and a bar in a building dating back to 1720, lies some of the lushest areas of the Sonoran Desert, at about a 3,500-foot elevation, and the distinctive Baboquivari Peak, which is considered sacred to the indigenous Tohono O’odham people.

Horseback riding is the main activity here but the new owners have expanded activities to include fat-tire electric mountain biking, off-road vehicle tours, clay-pigeon shooting and bird-watching trips to the neighboring Buenos Aires National Wildlife Refuge, a 117,500-acre preserve with grasslands that resemble the savannas of Africa. 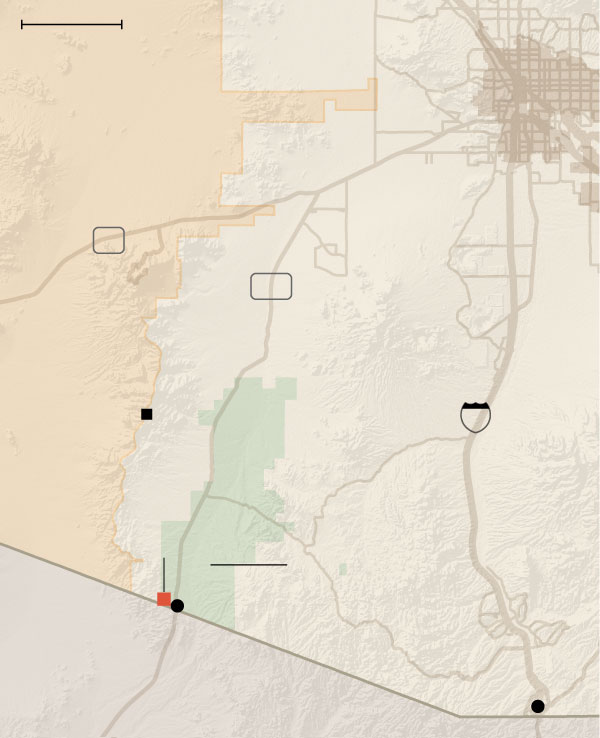 In addition to exploring the desert, morning and afternoon rides introduce guests to the ranch’s veteran wranglers Ross and Lynne Knox. The couple’s stories, including his close brushes with death running pack-mule trains in the Grand Canyon, conjured a western past that doesn’t seem so distant here in some of the more desolate parts of the southern border.

“If you’re not living on the edge,” he said with a chuckle about his daring cowboy lifestyle, “then you’re taking up too much space.”

Of course, the degree to which the desert is deserted is up for debate, and on my first ride I spotted the well-patrolled fence -— mostly out of sight from the ranch dwellings — that undulates east with the hills as far as the eye can see.

It abruptly stops at the nearby territory of the Tohono O’odham people who have prevented the fence, erected in 2007, from crossing tribal land. When the Knoxes drove me and four fellow guests in an off-road cart to see it, we took turns walking around to the Mexican side of the border and posing for photos. A few foot paths snaked into the hills on the American side staked with spiky ocotillo cactus.

Still, it was easy to forget about politics in a place where a juvenile great horned owl, flying low at dusk, roosted in a tree just 10 feet from my patio seat, and where cozy rooms with original fireplaces came stocked with mesquite wood. Mr. Knox, a celebrated cowboy poet, recited some of his work after dinner, concluding “when the memories come calling, you still can’t help but pray/Lord, please make me a cowboy again for a day.”