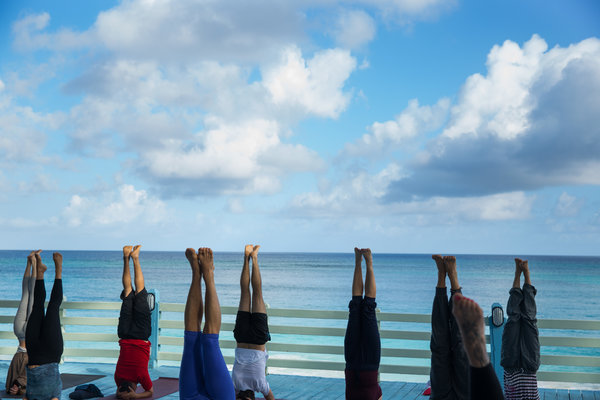 Birds fly south for the winter, and why shouldn’t you? With the approaching cold weather, it’s time to fire up the laptop and start planning that much-deserved vacation. Whether you’re single or coupled up, traveling solo or with children in tow, everyone has more or less the same goal: Escape to some temporary warmth while maximizing enjoyment and minimizing cost. Here are a few tips I’ve compiled for those seeking sun this coming winter, be it on a cruise ship or a quick getaway to a tropical island.

Don’t know your Celebrity from your Carnival? Can’t tell your Queen Mary 2 from your Symphony of the Seas? Newcomers might find the message boards on the Cruise Critic website useful: It’s an opinionated, active community of cruise enthusiasts and many answers to basic questions (everything from packing logistics to passport concerns) can be found within the various conversation threads.

There is also a dedicated section that features thousands of reviews written by first-time cruise participants, with subsections for things like luxury or river cruises. As with anything online, user reviews should be taken with a grain of salt — but for those who aren’t quite sure where to begin, this is a good place to consult.

I searched for a seven-night Holland America cruise departing from Tampa, Fla., for two adults and two children and was quoted a total of $1,546 on the Holland America website. A quick search on a different site, Cruise.com, yielded the exact same price, $1,546.

A search for a four-night Bahamas cruise for two adults leaving Port Canaveral in January resulted in a total price of $724.68, booking directly through the Royal Caribbean website. Over on Priceline, that same cruise was on sale for the same amount, to the penny — $724.68. On the Costco Travel site, the price was $724.68. Out of curiosity, I checked one more site. On Expedia, that same cruise came out to a total of, you guessed it, $724.68.

The lesson? Shopping around doesn’t always get you a better deal. Instead, look for small ways to get ahead. Expedia and Priceline, for example, both offer varying amounts of onboard bonus spending — good for things like spa treatments and incidentals — depending on how expensive your cabin is.

If you’re going on a cruise, there’s a decent chance you’ll want to enjoy a drink or two during your vacation. And the cruise companies, of course, are banking on you spending plenty of money on their alcohol.

Every cruise line has a different policy, though, so read up carefully beforehand so that you can maximize what’s allowable. Royal Caribbean, for example, allows guests to bring two 750-milliliter bottles of wine or champagne per room. Guests can also bring up to 12 17-ounce cans or bottles of nonalcoholic beverages. Bringing a few waters and sodas will help offset the pain of the $13-per-day soda packages being rolled out in 2019.

The beverages policy at Norwegian Cruise Line, however, is different. Guests may not bring any nonalcoholic beverages aboard, not even water, unless it’s for a medical reason or mixing infant formula. Guests may, however, bring bottles of wine and champagne aboard, provided they pay a corkage fee ($15 per 750 milliliter bottle).

Residents of some states get discounts

Some cruise companies offer what’s known as a resident rate — a discount to residents of certain U.S. states. The rates vary, so it’s good to call and ask exactly which states receive a discount. When I checked out a five-night Carnival Bahamas cruise on the website Cruise Sheet leaving from Charleston, S.C., in January, I noticed that New York residents received a slight discount ($310 per person, per night instead of $328). Sometimes it’s the residents of the state that the ship is departing from who get the discount, but residents from other states can be included, too.

None of us wants more email, but it can be the best way to stay in the loop about sales and last-minute deals. Once you’ve set your sights on one or two cruise companies, sign up for their emails to monitor prices and find out when there’s a deal.

Use those points and miles

There’s no sense in having credit card points, hotel points and airline miles if you’re not going to use them. And that trove you’ve amassed is the perfect thing to take the edge off the cost of your vacation — or in some cases, pay for it entirely.

A three-night stay in late December at Parador Guanica, a boutique hotel built in 1929 on the southern coast of Puerto Rico, is $295 (double occupancy), booked through the Chase travel portal. But remember: holders of the Chase Sapphire Reserve credit card can redeem travel at 1.5 cents per point — or in this case, about 19,700 for the entire stay.

Currently, the cheapest advertised flight from New York to Honolulu, leaving Dec. 26 and returning Dec. 30, will cost you a cool $1,350 — a pretty expensive ticket. But the points cost of the flight, just a hair under 90,000, while still not cheap, is somewhat easier to stomach.

The American Express travel portal offers the benefit of booking travel packages, but doesn’t offer as good value for points redemption. A five-night trip from Boston to St. Thomas, U.S. Virgin Islands, departing just before New Year’s, is valued at $1,290 per person when booked as part of a package with the budget guesthouse Sunset Gardens — a saving of several hundred dollars compared to booking the flight and hotel individually.

But the points cost, about 184,000 Membership Rewards points per person, represents a value of only 0.7 cents per point — less than half the value than in the above-mentioned examples in the Chase portal. Still, if you’re sitting on a big pile of American Express points, it’s an option to consider.

Think beyond the brand-name hotel

The major hotel brands offer a certain amount of reliability, but they’re also limiting. In Nassau, the Bahamas, a weeklong stay beginning in late December will run you $400 per night at the British Colonial Hilton Nassau. At the slightly less luxurious Courtyard by Marriott Nassau Downtown, you’ll still pay $270 per night.

Consider heading north of New Providence to Great Abaco Island (there are nonstop flights from Miami and Atlanta, among other cities), where there’s nary a Marriott nor Hilton to be found. A quick search on the site VRBO (Vacation Rentals by Owner) yielded a rental condo right on the beach for just $128 per night. Don’t count on daily housekeeping, but you might enjoy a more intimate, local experience.

Think outside the box

Looking for some travel bragging rights? You might be interested in United Airlines Flight 154, colloquially known as the Island Hopper, a flight that bounces between seldom-visited islands in the Pacific while heading from Honolulu to Guam. Making five stops at various locales in the Marshall Islands and Micronesia, with only brief stopovers, it’s an interesting (and, at 14-plus hours, somewhat lengthy) opportunity to see what few casual travelers have. For aviation enthusiasts, the point of the Island Hopper is the flight itself, and it is a popular bucket-list item.

A trip in the beginning of January will cost over $1,300, however. But if you’ve got some United miles laying around, you can make the trip for just 27,500 miles. You can combine it with the airline’s Excursionist Perk, which allows for a free one-way award flight within one region when you book a valid round-trip or multicity trip that begins and ends in a different region (browse what qualifies as a “region” on United before you book). With a little work, you can carve out a one-of-a-kind trip.

If you’re feeling adventurous and have a certain amount of flexibility, the website Cheapcaribbean.com offers something called Deal of Fortune — discounted stays in resorts for, the site claims, as much as 65 percent less than you’d normally spend. You select when and where you fly from as well as the length of your trip and general area where you want to stay — Los Cabos in Mexico, for example, or Punta Cana in the Dominican Republic. But your exact lodgings are a mystery at the time of booking.

Within seven days of your departure, you’ll be notified of your resort. I would advise reading all fine print before purchasing, as well as doing some online research. TripAdvisor has several forum threads that discuss experiences with these mystery deals. While the thrill of possibly getting a great deal on a vacation can certainly be exciting, it’s best to go into any overseas travel situation with as much information as possible.

Lucas Peterson is the Frugal Traveler columnist. He has written for GQ, Lucky Peach, Eater, LA Weekly and Food Republic. His video series for Eater, “Dining on a Dime,” is now in its 11th season. @FrugalTraveler