Brits are flocking to Turkey as the collapse of the lira means UK tourists can buy a beer for just £1.37 and families can dine out for £35

British holidaymakers are flocking to Turkey as the collapse of the Turkish lira has seen prices in resorts plummet.

UK tourists heading to the likes of Marmaris and Antalya can buy a beer for just £1.37 – the same as the cost in Britain in 1990 – and also snap up a meal for a family of four with drinks for just £35 – down 50 per cent on last year.

But it’s not just food and drinks that are cheap, prices of everything from sun cream to insect repellent and even buckets and spades are down as much as 65 per cent when compared to last year. 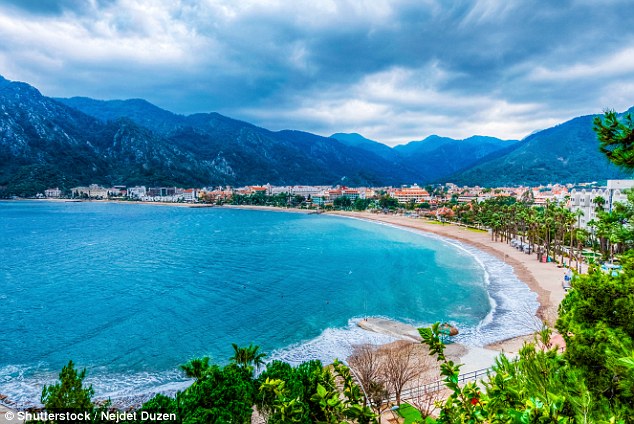 The resort of Marmaris in Turkey, which has seen an influx of Brits after the Turkish lira collapsed, making it ultra cheap

The figures, from Post Office Travel Money come as Turkey’s currency crisis has been triggered by concerns over president Recep Tayyip Erdogan’s economic policies and a trade and diplomatic dispute with the United States.

And now UK tour operators are seeing a huge surge in bargain hunters heading to Turkey with Antalya airport in the south of the country welcoming more visitors than the Spanish islands of Tenerife and Majorca.

Thomas Cook said there had been a 63 per cent increase in bookings to Turkey while the airline Jet2 is selling twice as many seats on flights to the country this year.

Fellow travel company TUI also said that Turkey is its third most popular destination behind Greece and Spain. 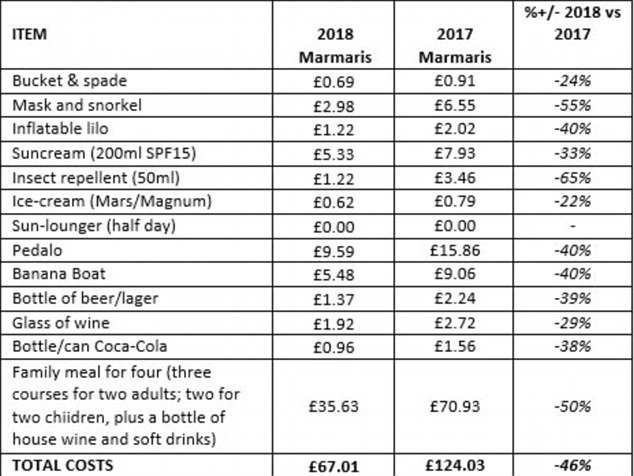 Elsewhere, Post Office Travel Money revealed sales of the Turkish lira was three times higher than last year after losing 43 per cent of its value against the pound.

Andrew Brown of Post Office Travel Money said: ‘Sales have been rising all year as it became clear that holiday costs in resorts like Marmaris had been falling steadily as sterling surged in value.

‘We have seen our currency sales surge by 198 per cent compared with the same time last year.’

However, foreign currency suppliers in the UK are struggling to meet demand for Turkey’s collapsed currency. 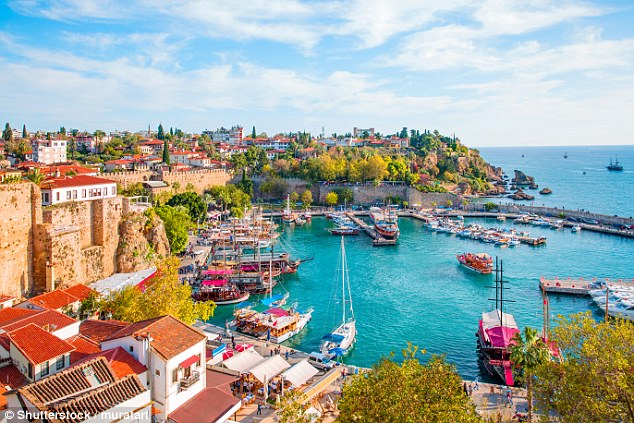 UK tourists heading to the likes of Antalya, pictured, can buy a pint of beer for just £1.22 – the same as the cost in Britain in 1990

Post Office Travel Money apologised to holidaymakers who have struggled to get hold of lira from some of its branches.

A spokesman for the firm said: ‘We currently have strong supplies of Turkish lira across the Post Office network, however a small number of branches may be running low on stock due to the unprecedented demand.

‘We expect to replenish stocks over the next 24 hours to those branches with limited stock and apologise if any customers have experienced delays when purchasing currency.’

Thomas Cook Money – which is supplied by Travelex – has also been running low on lira.

Managing director Anth Mooney said: ‘With the lira in high demand across our stores, we’re advising customers to put money on a pre-paid card which locks in the unprecedented rates now to spend on holiday later.’