Barafundle Bay in Pembrokeshire has seen an influx of visitors this summer even though there's a mile walk on foot to reach it. 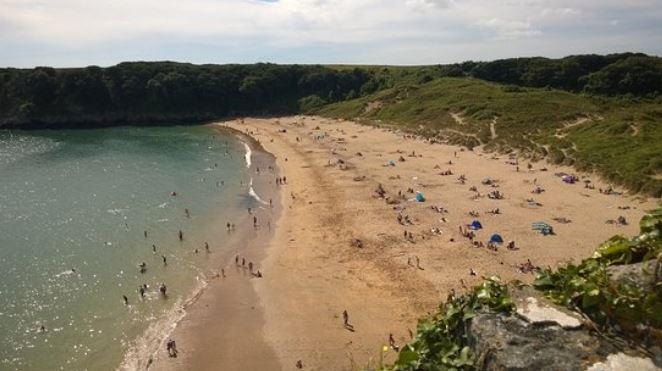 But National Trust chiefs now want people to steer away due to overcrowding, and because less than two miles away another beautiful beach, Broad Haven South, is being ignored.

While visitor numbers to Barafundle increased by more than 30,000 to 120,000 in the past three years, Broad Haven has attracted only 8,000 new visitors.

Now the National Trust, which looks after both beaches and the coastline in between, wants people to explore the "second hidden gem" of Broad Haven South.

The popularity of Barafundle has come at a cost, as the secluded beach has experienced significant degradation of its sand dunes and footpaths.

The Trust said: "Swapping Barafundle for Broad Haven South will help conserve the coast by spreading people across the estate, reducing the erosion of footpaths, minimising the disturbance to wildlife in the dunes, and ensuring less litter is being washed out to sea."

The Trust has now launch its Sea Safari project, which will promote a coastal trail around the Stackpole Estate and tell holiday makers where the best other beaches are.

Remote Barafundle was recently voted the best in the world by Passport magazine, which has caused its popularity to surge.

The travel magazine said: "Barafundle Bay, part of southwest Wales’ Pembrokeshire Coast National Park, is a revelation and all the more so for the process of arriving there.

"As you approach by car, rolling countryside turns more dramatic, sheer and craggy cliffs dropping precipitously to the sea.

"Ascending, the dirt track disappears and you’re in open green fields, the pastures backed by rolling hills and the shimmering bay below, ringed by rocky cliffs.

"It’s a luxuriant curve of sand, topped by dunes and grasses on hills that make it feel immensely private.

"The long stretch of cliff known as Stackpole Head sticks straight into the sea like an arm. A little boulder sits jauntily offshore. The waves crash against the smooth sand.

"Your company here? Twelve people, four dogs, and a visual overdose of beauty."