Beauty editor Lucy Partington sees The Lion King come to life as she seeks out the Big Five on the Sabi Sand Game Reserve.

For transparency’s sake, I need  to confess that I am categorically not an animal person. I didn’t grow up with pets and I don’t go weak at the knees if I see a puppy on public transport. Because of that, going on safari was never really on my bucket list.

Then, out of nowhere, I had  an urge to channel my inner Nigel Thornberry, and when a  visit to a private game reserve bordering Kruger National Park in South Africa came up, I grabbed it with both hands. Which is how I came to be on my way to Tengile River Lodge, gazing at a beautiful leopard just feet away from me.

The journey has taken 18 hours from Heathrow to Johannesburg followed by a 40-minute flight to Skukuza, a tiny airport on the edge of the national park that also connects it with Cape Town. At this point I’m tired and have no idea what to expect, but as we’re driving towards the lodge along bumpy, muddy tracks through the bush, David, our tracker, comes to a slow stop and everything becomes much clearer. “Look.  Over there,” he says, pointing  to a tree about five metres away. “There’s a leopard sleeping.”

I squint a bit harder, and as I curse myself for forgetting my glasses,  I spot it. An actual leopard, in the actual wild, snoozing on a branch. I’m literally 10 minutes in and can tick off one of the Big Five you hope to see on safari (along with lions, rhinos, African bush elephants and buffalo) thanks  to an encounter that sets the precedent for the next three days.

My mind is blown again when we pull up to Tengile. I’ve driven past kudus (native South African antelope), zebras and giraffes like it’s normal, then when  I reach the lodge I’m told  that I just missed a herd of elephants walking past, but animals aside, this place is a real spectacle. Small but perfectly formed and decorated with fabrics hand-painted by local artists, there are 10 suites – each with a private pool, outdoor shower, veranda and huge bedroom – that face out to open views of the bush.

But the whole point of  being here is to explore the 26,000 acres of the Sabi Sands Reserve. Two game drives a day in an open-top Land Cruiser are standard.  One in the morning (the 5.30am wake-up calls get  easier, believe me) and one around 4pm. Each lasts three  or four hours, and time does fly. I won’t lie: it’s nerve-wracking at first but eventually it becomes obvious that animals don’t notice humans – not even when they’re wearing a cow-print jumpsuit (which, granted, wasn’t the best outfit choice).

Jonty and David, our ranger and tracker, are fully trained,  carry guns (which have never yet been needed) and can detect when an animal’s mood changes or if a situation could become dangerous. The majority of time is spent watching events unfold from the vehicle, binoculars in hand. I manage to tick off the remaining four of the Big Five, but no sighting is too big or too small to bring a rush of excitement. From dung beetles to eagles and black rhino to buffalo, Jonty and David’s love for nature is infectious.

We pull over to examine lion  tracks and laugh at baby elephants learning – and failing – to use their trunks. We take selfies with giraffes. We park metres from sleepy lion brothers and watch avidly as leopards fight in a tree. We stare in disbelief at a male leopard snacking on a baby zebra carcass, and follow a female leopard for two hours, watching as she prepares to go in for a kill. We see a pregnant lioness stalking through reeds. We find a baby hyena den and watch as they  sniff around us, drive past old  male buffalo and gawp at swooping birds of prey. 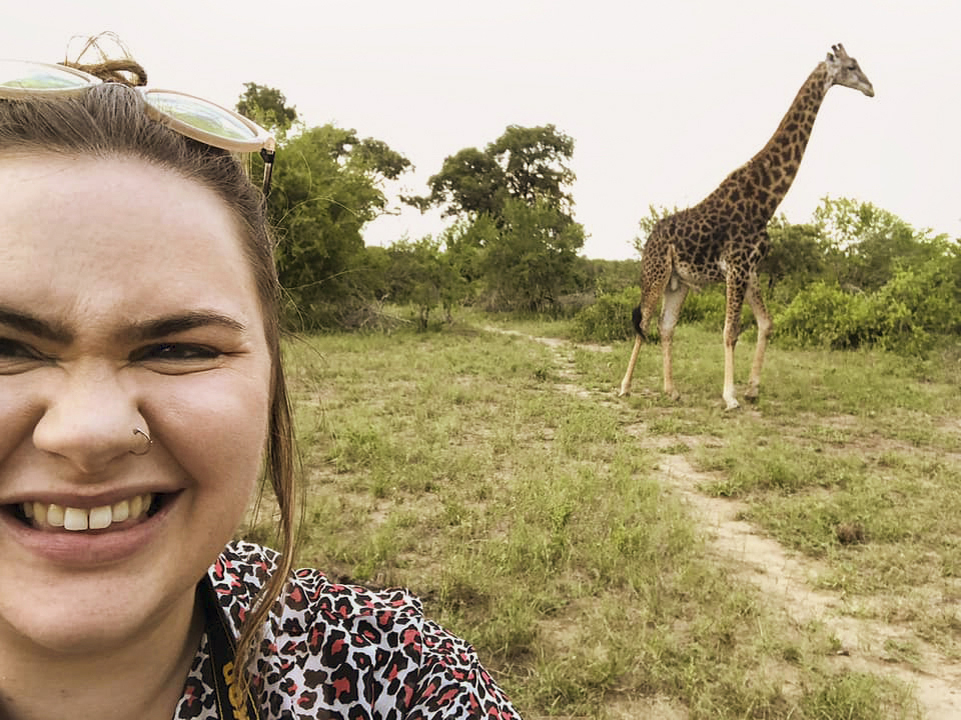 Across six drives I barely see any other groups of visitors. The rangers are in constant contact each other so if something special is spotted we can head there straight away, but there’s a two-vehicle rule which means no overcrowding that could scare animals. I get so lost in the surroundings that I decide if I have my heart broken I will go on safari to find myself, because during those few hours each day I forget about everything, and think of nothing except the animals and the bush.

Witnessing the real meaning of the circle of life is a truly humbling experience. There are no words  to describe how incredible safari actually is, and the tears rolling down my face on the way  home say a lot. Perhaps  I am more of an animal  person than I thought.