A guest at Disney World’s Animal Kingdom in Orlando, Fla., reportedly assaulted a security guard in a seemingly unprovoked incident on Oct. 25. Police later added that the suspect appeared to be in an “excited delirium” when the attack occurred. 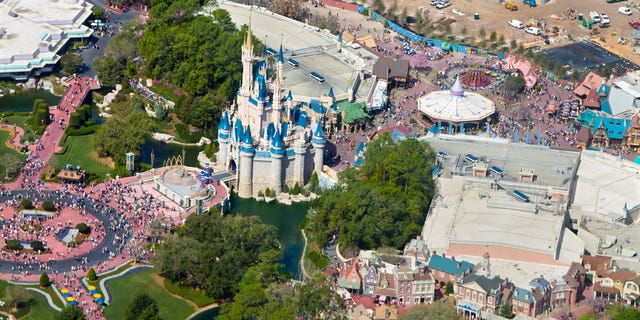 According to witnesses, Arvid allegedly tackled a security guard from behind near the DinoLand USA area of Disney World.
(iStock)

Authorities arrested 19-year-old James Arvid and charged him with battery on a security guard, the Orlando Sentinel reported. A recently released sheriff’s report revealed bizarre details about the incident, during which Arvid allegedly tackled a security guard from behind, near the DinoLand USA area of the park.

The suspect was reportedly able to put the security guard in a headlock and continued to hold the man down while he radioed for help.

Other park guests intervened, helping to subdue the attacker. The security guard reportedly only received minor injuries during the incident.

Police officers eventually arrived and restrained the suspect, who was later taken to a hospital in Celebration. The sheriff’s report described Arvid as being “in a state of excited delirium and unexpected strength.”

Arvid reportedly showed signs of alcohol and drug use, along with heatstroke, according to an emergency room doctor. He reportedly claimed that he took LSD, but said he couldn’t remember anything about the incident in the park. He pleaded not guilty to the battery charge.

In a statement obtained by the Orlando Sentinel, a spokesperson for Disney World said, “We do not tolerate violence of any kind on our property and appreciate those, including the Orange County Sheriff’s Office deputies, who quickly came to the aid of this cast member.”