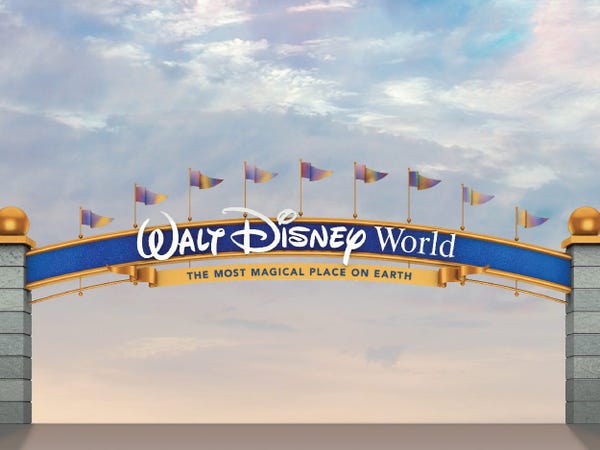 Walt Disney World's iconic entrance is getting a makeover — and some fans aren't looking forward to it.

The Florida theme park announced on Monday that it will be changing the color scheme of its gateways, which are known for having tall archways, multicolored flags, and giant cutouts of Mickey and Minnie Mouse. The change is being made to complement the recent Cinderella Castle makeover, according to the Disney Parks Blog.

Renovations began on Monday, according to the blog post, with similar colors being added to the Magic Kingdom Park Auto Plaza. Disney also shared a virtual rendering of what the gateways will look like after the makeover.

It appears that the gateway will be painted in shades of gold, blue, and gray, with rainbow-colored flags up top. Underneath the Walt Disney World logo will be a thin sign that reads "The Most Magical Place on Earth."

The classic Mickey Mouse and Minnie Mouse cutouts will remain, with Mickey on the left and Minnie on the right.

The updated gateways look a lot different than the classic design that's been seen at Walt Disney World for decades. It's famously featured a miniature Cinderella Castle above the Walt Disney World logo, and a blue banner that read "Where Dreams Come True."

The gateway also had multicolored flags up top, red-brick columns, and Minnie and Mickey cutouts in front of mouse-print walls.

Disney fans have shared mixed reactions in response to the announcement

Some fans have said the new color scheme will ruin the "magic" and nostalgia of the iconic entrance.

Others have argued that Disney World should be focusing its attention on supporting cast members who were recently laid off instead of changing its decor.

Still, some people are welcoming the change, which they say will add a modern touch to an older area of the theme park.

In February, Magic Kingdom Vice President Jason Kirk announced in a Disney Parks Blog post that the castle would get a makeover in honor of the 70th anniversary of "Cinderella."

The Magic Kingdom landmark was painted pink with gold accents over the course of a few months, much to the dismay of some Disney fans. When parkgoers first entered the theme park in July after pandemic-related closures, some said the structure appeared unfinished and too similar to Disneyland's castle.

It's likely that such changes are being made to ensure that Disney World looks its best for the park's 50th anniversary on October 1, 2021, though Disney has yet to confirm or deny this.

Representatives for Disney World did not immediately respond to Insider's request for comment.