Pictured: The family of nine who live in an off-grid shack with a composting toilet for an ‘economic lifestyle’ (and five of the children are home-schooled so the parents can ‘stay connected’)

This family lives in an off-grid shack with a composting toilet – and the parents home school five of their children so they can ‘stay connected to them’.

Mother-of-seven Jasmine Kosach, 31, from Tasmania, Australia, grew up with an appreciation for all things nature, due to her mother and grandmother being gardeners.

Jasmine and her husband, Ben, had a garden maintenance business but they struggled financially and in May 2017, they decided to start a holistic, off-grid life in a shack to help the planet as well as live an economic lifestyle. 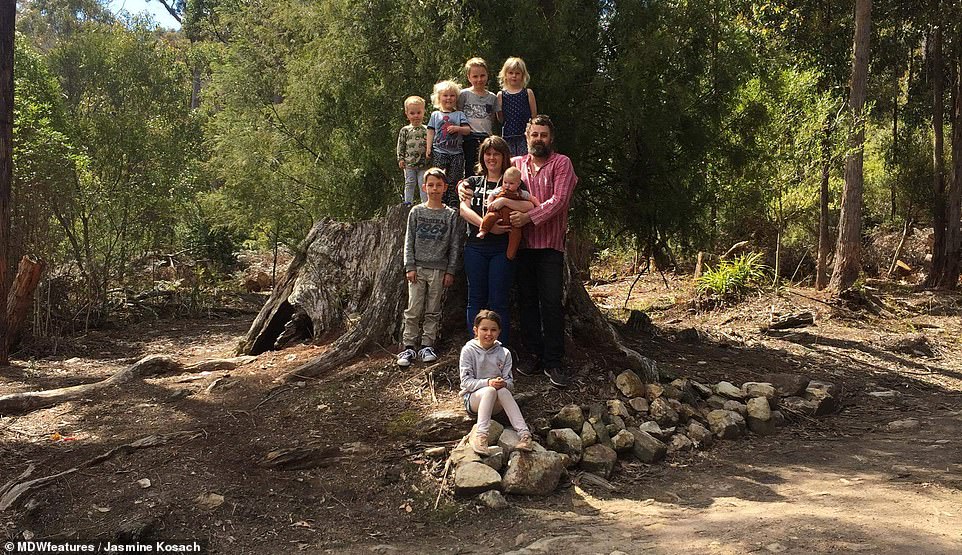 Mother of seven Jasmine Kosach, with her husband Ben and seven children. The family of nine live in an off-grid shack in Tasmania 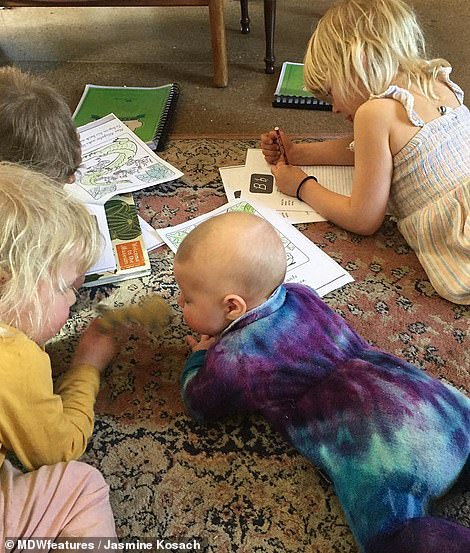 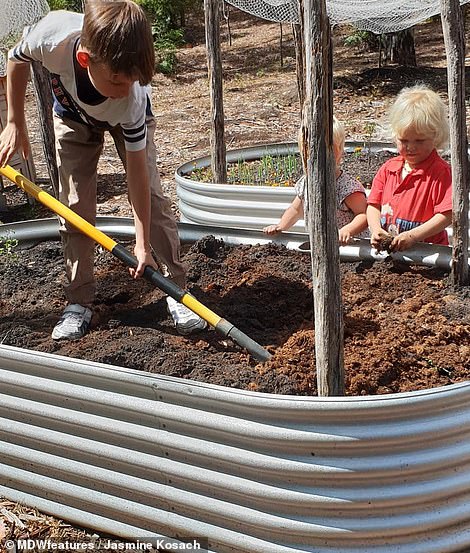 The five oldest children are all home schooled so Jasmine and Ben can ‘stay connected’ to them. Pictured right is Wallace, aged 11, digging using a shovel while younger brother Morris and sister Vera look on 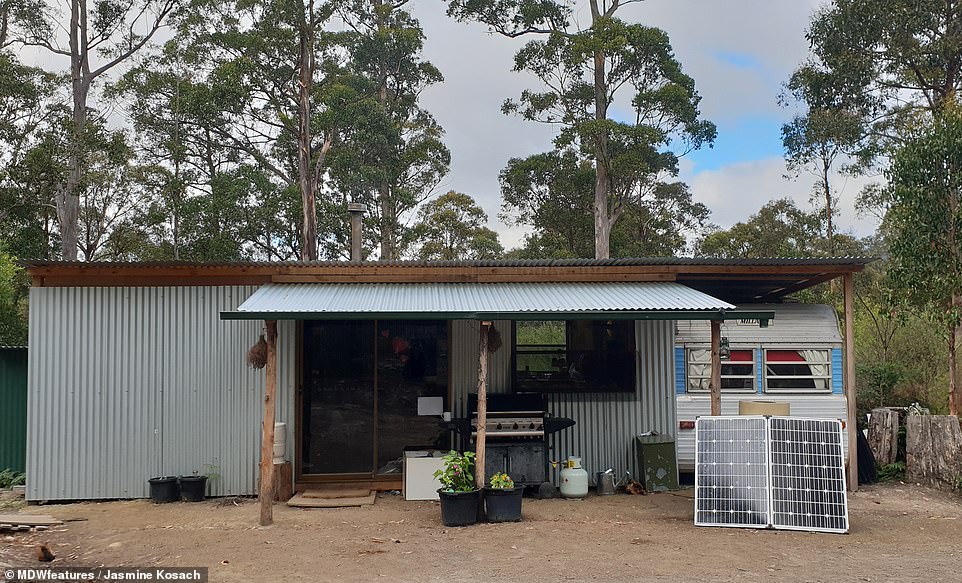 The family’s off-grid shack, where all nine of them live. They decided to start a holistic, off-grid life in a shack to help the planet as well as live an economic lifestyle 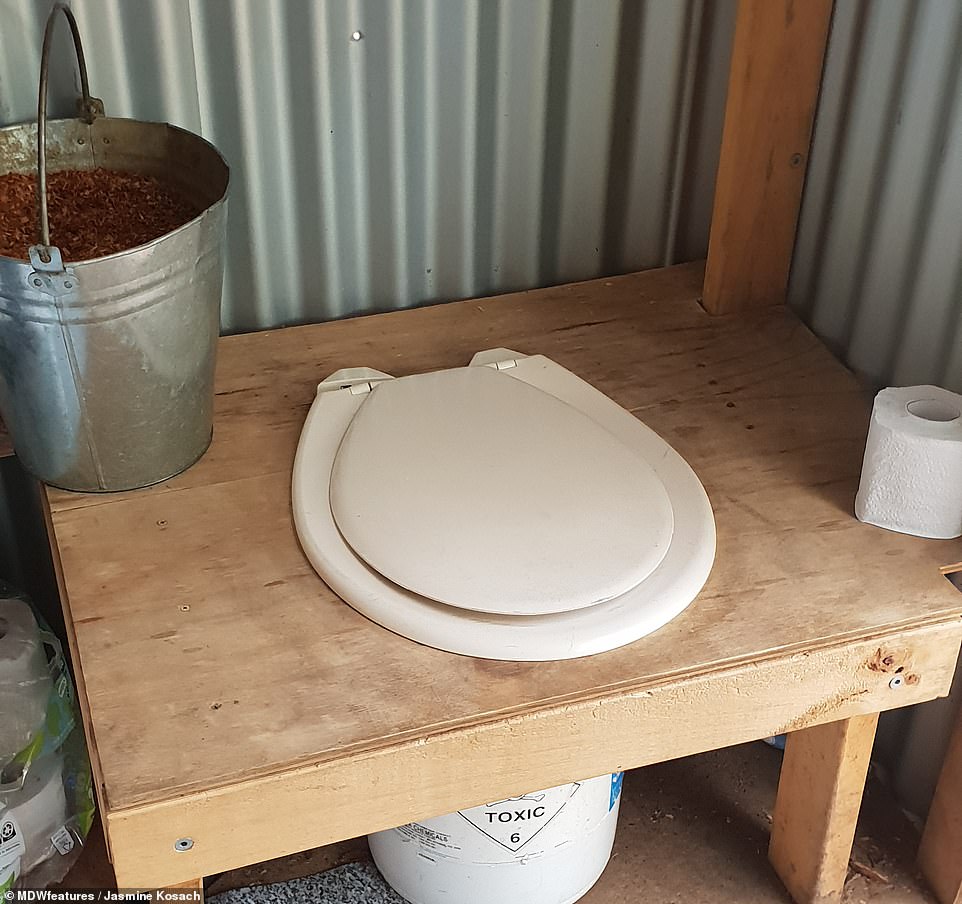 The family do not have a conventional toilet and instead use a DIY composting toilet, pictured

Since then they have been living off necessities, including using a tank of water, a small amount of solar power and using a generator for computers and power tools.

Jasmine and Ben have also been home-schooling their children; Wallace, 11, Lucy, 10, Ronan, eight, Hattie, seven, and George aged five, while looking after their toddler Morris, two, and eight-month-old Vera.

They plan to eventually move out of their little shack and do a full-shed conversion to increase their space.

Jasmine said: ‘Growing up with gardeners in the family, I was always exposed to a natural outdoorsy lifestyle and I suppose a keen interest in a “grass roots” way of living developed through meeting other people passionate about gardening and homesteading.

‘Home-schooling wasn’t always on the cards but again choosing a natural parenting style and being active in the online community has exposed us to the idea, it really appealed to us and we felt it really complemented our holistic lifestyle.

‘Connection is really important for us in life, to each other and to nature. Sending our kids to school we feel would break this connection. We see home-schooling as an extension of our natural parenting and lifestyle philosophy. 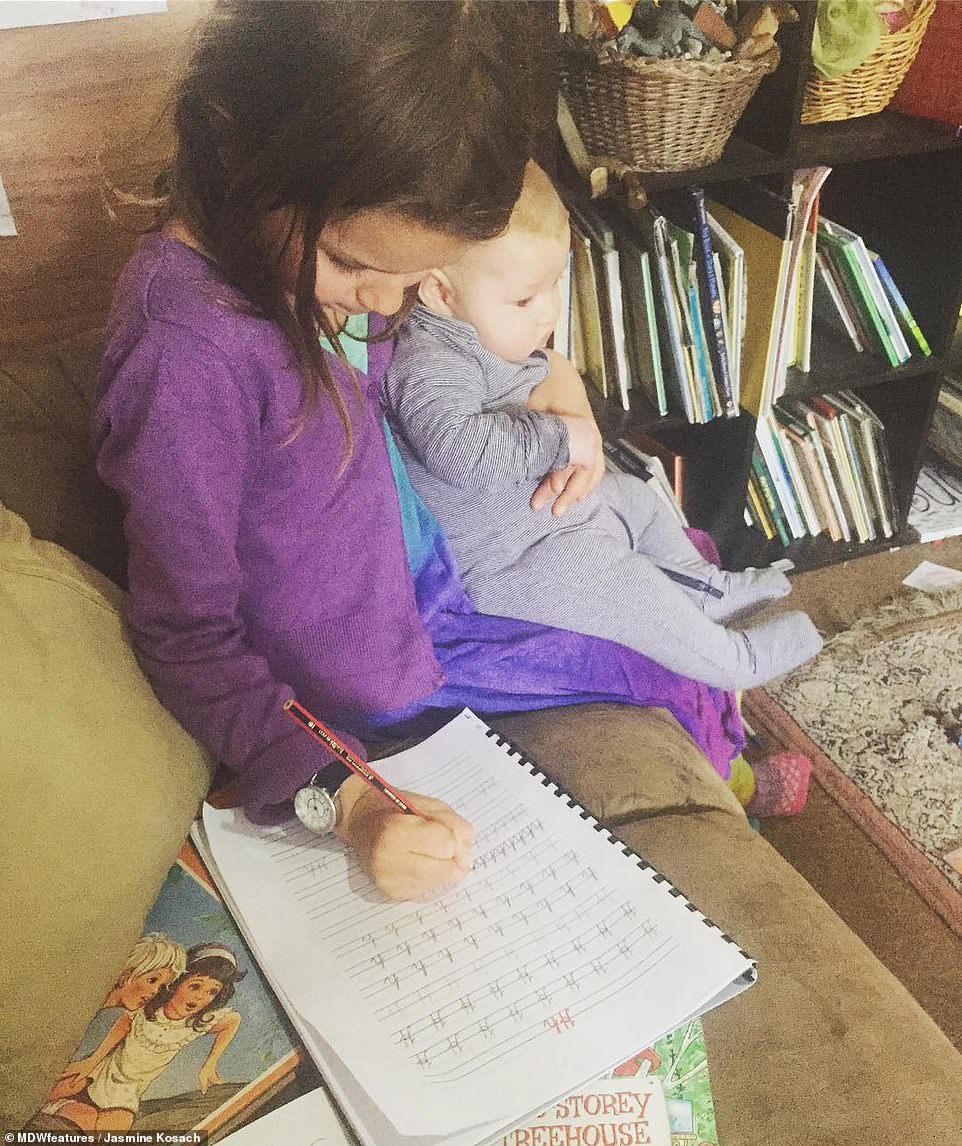 Mother Jasmine said: ‘We see home-schooling as an extension of our natural parenting and lifestyle philosophy.’ Pictured is Lucy doing her schoolwork while holding her baby sister, Vera 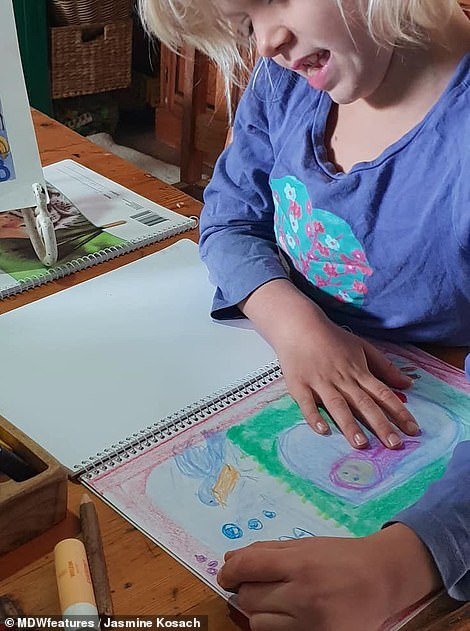 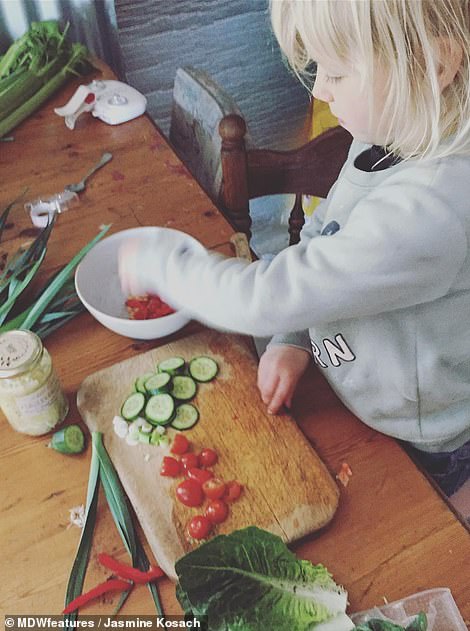 Seven-year-old Hattie uses coloured pencils to draw a picture, left. Pictured right is Morris, aged two, helping his parents out with the cooking

‘The two little ones don’t know any different and it’s just become such a normal way of living for us now. As for home-schooling, I make sure my youngest kids’ needs are always met first so we can then move on to the older children’s main lessons without too much disturbance.’

Jasmine says that while she has received positive comments from people about the way they live their life, some have described their lifestyle and living conditions as ‘poor’.

She explained: ‘We have had people come up and be absolutely inspired and think it’s fabulous and then we have had others come up and seem to think we live like poor people, which just makes me laugh. 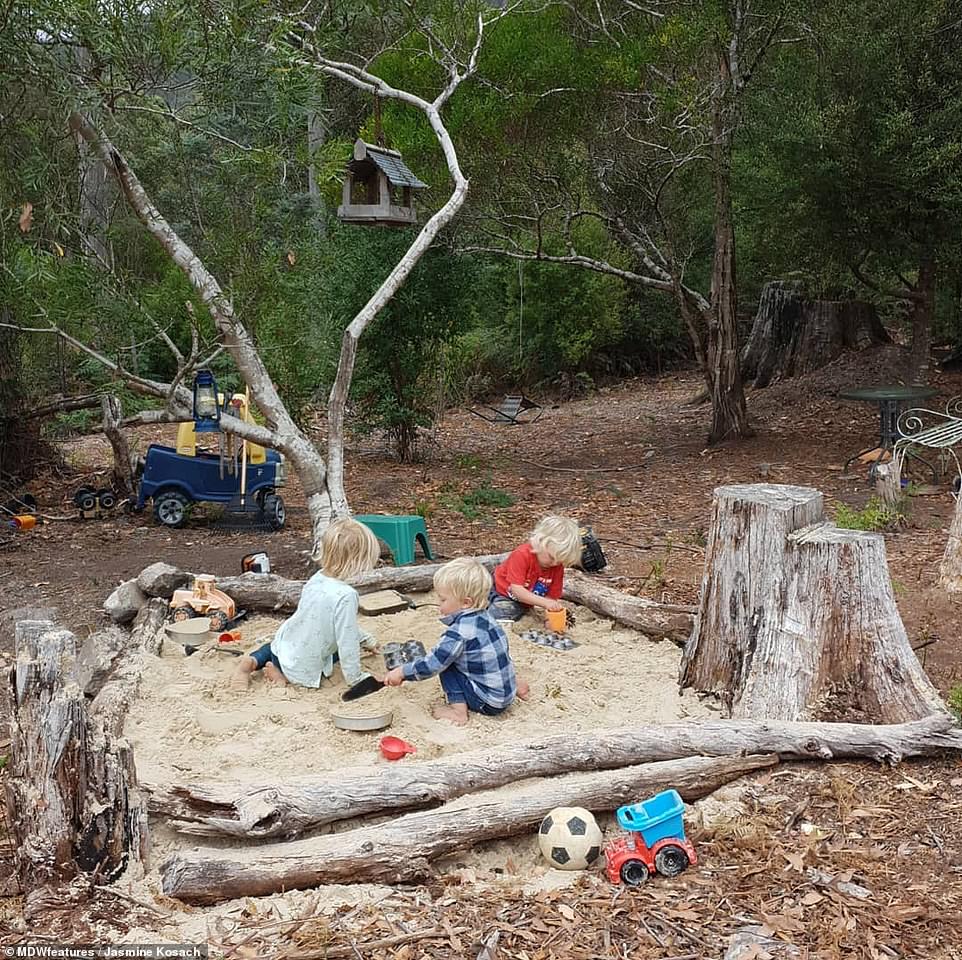 Jasmine says that while she has received positive comments from people about the way they live their life, some have described their lifestyle and living conditions as ‘poor’ 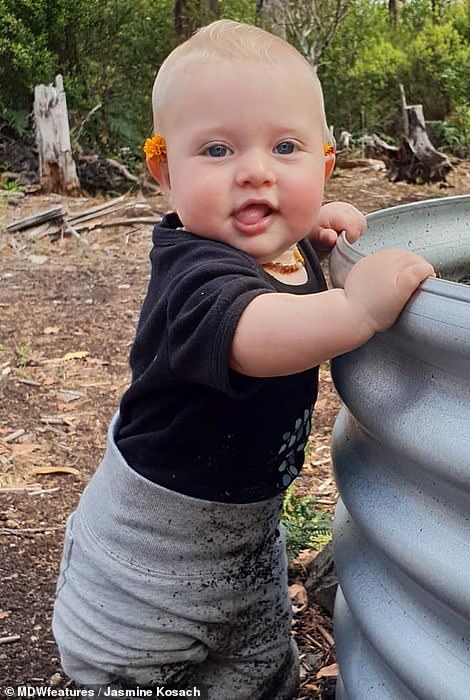 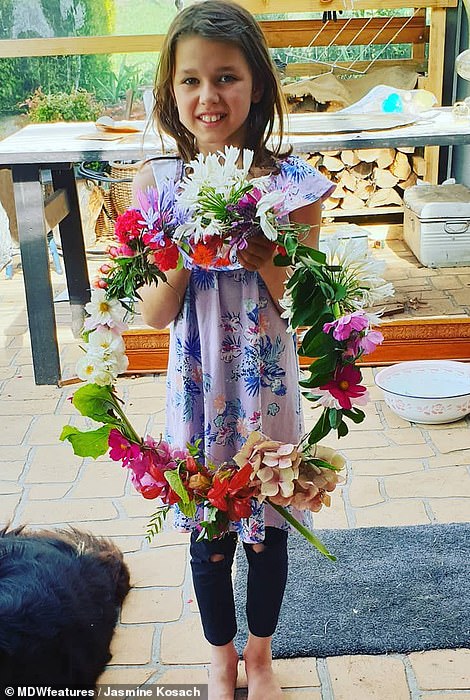 Baby Vera plays in the garden, left, while pictured right, oldest daughter Lucy, aged 10, shows off a flower wreath she has made

‘We love sharing the way we live with others through social media and real life. We find our type of holistic lifestyle so rewarding and nourishing to the mind, body and spirit.

‘It’s much closer to the natural lifestyles humans are supposed to lead; closer to nature with their hands in the dirt. This sort of lifestyle keeps you in check.

‘You can’t just use electricity and water with no regard to it being an endless supply, which is how most people live but the thing is it’s not endless.

‘The Earth can’t keep sustaining the modern lifestyles most people live so if we can inspire others to think about making some small steps like installing a DIY composting toilet or growing a garden even that’s great.

‘The biggest issue we face is space right now and having so many different aged kids sharing a bedroom while we are in the shack.

‘It causes some problems especially for older ones wanting space, so we have had to make sure we try to meet the kids’ needs in other ways like time out at friends’ places.

‘We now plan to build our off-grid home and move out of the little shack. We will be doing a full shed conversion. Plans are in the works now to achieve this.

‘We will be expanding our gardens to include more vegetable beds and a hot house and once we have fencing the cottage style garden will become food forests.’