But then Texan capital Austin promotes itself as quirky — Keep Austin Weird is one of its slogans. 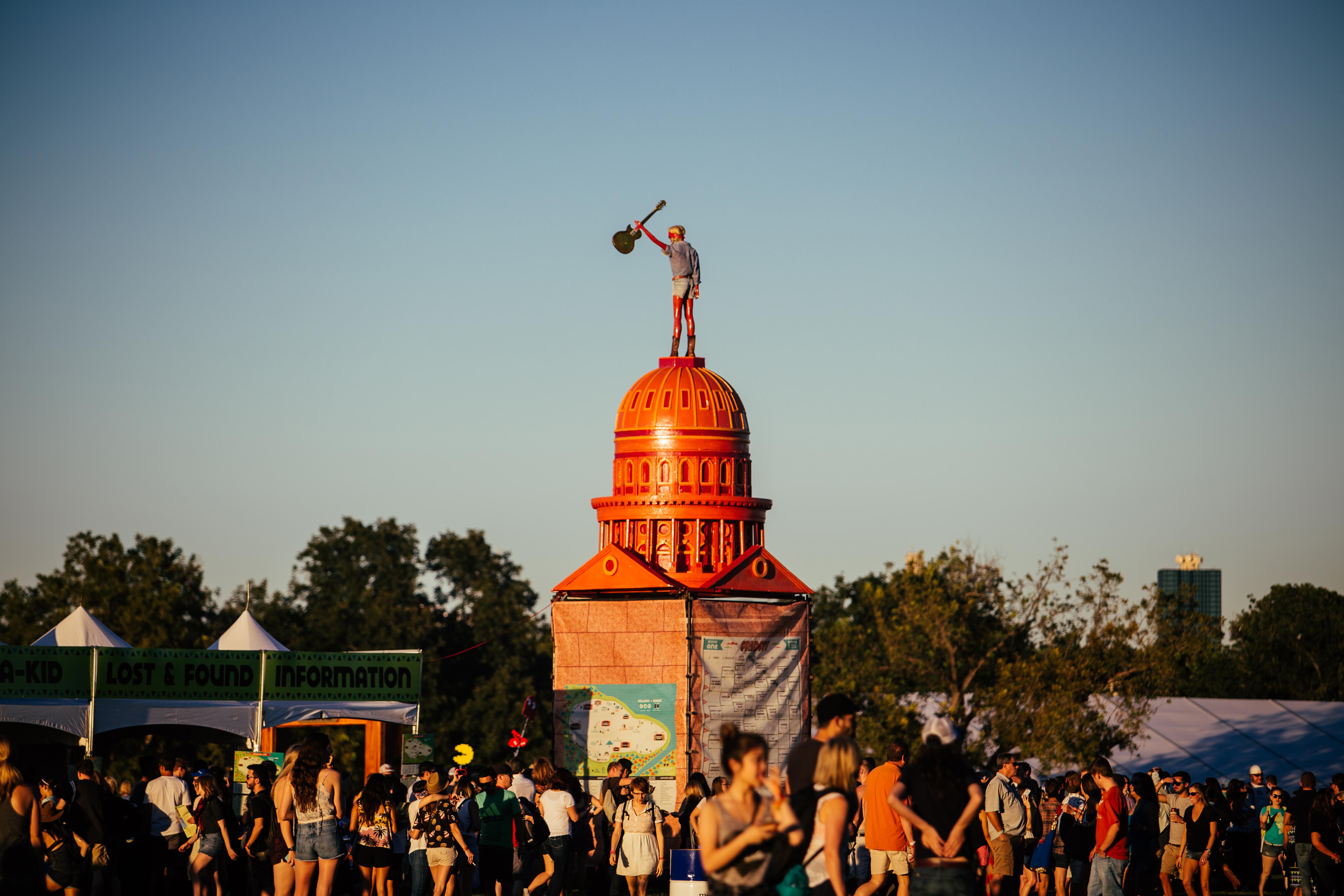 Good for them, I say. It’s a pity more cities don’t follow in the cowboy-booted footsteps of Austin folk.

For they sure know how to have a great time, in a city where anything goes.

There are more than 200 live music venues and ten times as many bands and artists in the Live Music Capital of the World, performing indie rock to jazz, country to blues and hip-hop to reggae.

“You can find any sound you like, on the streets and in the bars and restaurants.” 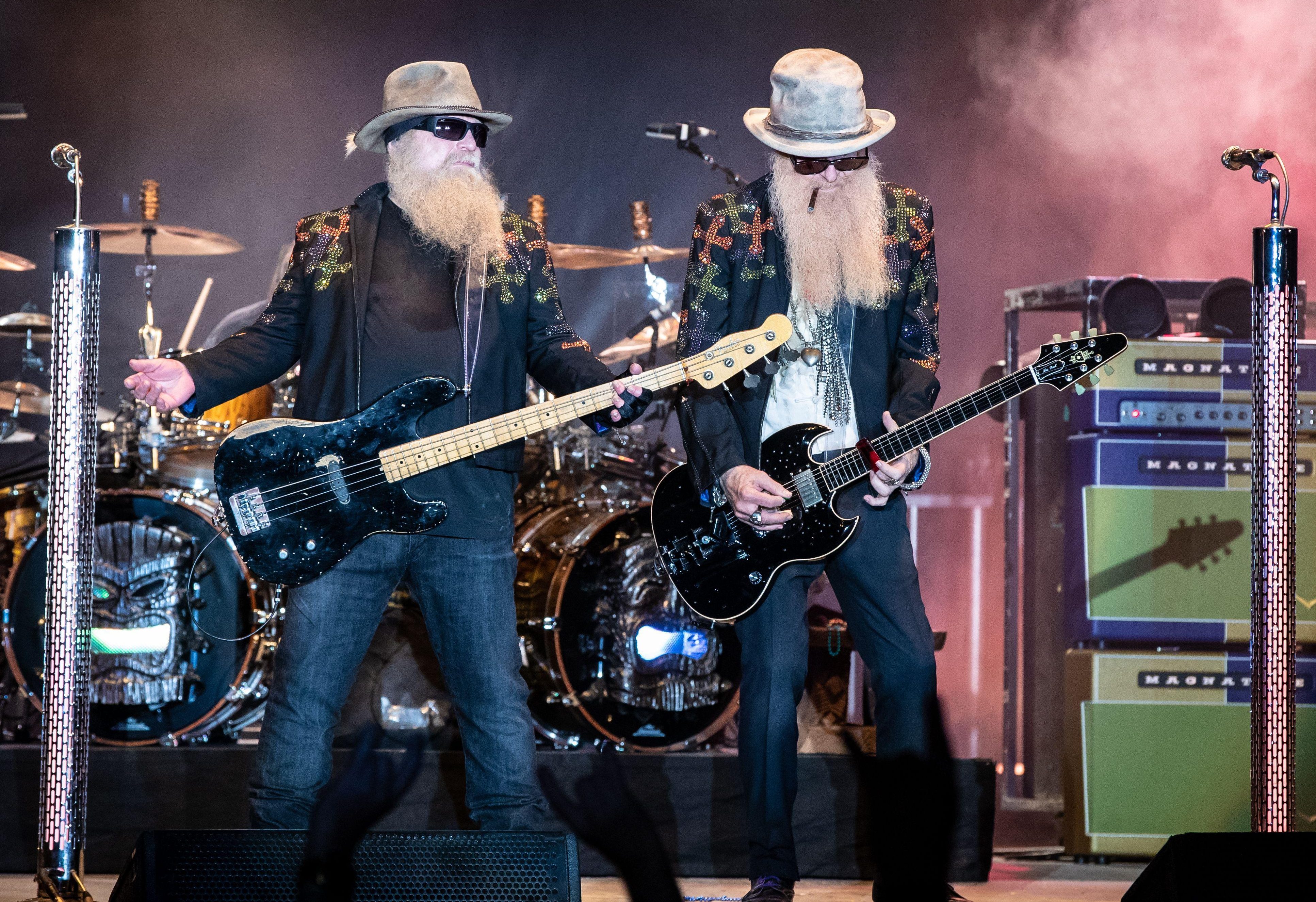 And I did, starting with a listen to Lucas Hudgins and the First Cousins as I tucked in to Texas Gulf Coast crab, fishcake and chilli-lime grilled prawns.

Me feeding my face at Ranch 616, a cool eatery with a fairylight-lit al fresco area, was lucky for them as it stopped me singing along.

I imagine guys like the talented Lucas Hudgins must get fed up playing to background chattering, chomping, slurping and burping.

Texans are so spoilt for choice of live music that they often don’t stop what they’re doing to listen.

There’s always another night, another venue and there is — Antone’s Nightclub where Eric Clapton performed, the Saxon Pub which Kris Kristofferson described as “like playing in my living room” — and The Victory Grill, now on the National Register of Historic Places, where the likes of Billie Holiday and Janis Joplin graced the stage. 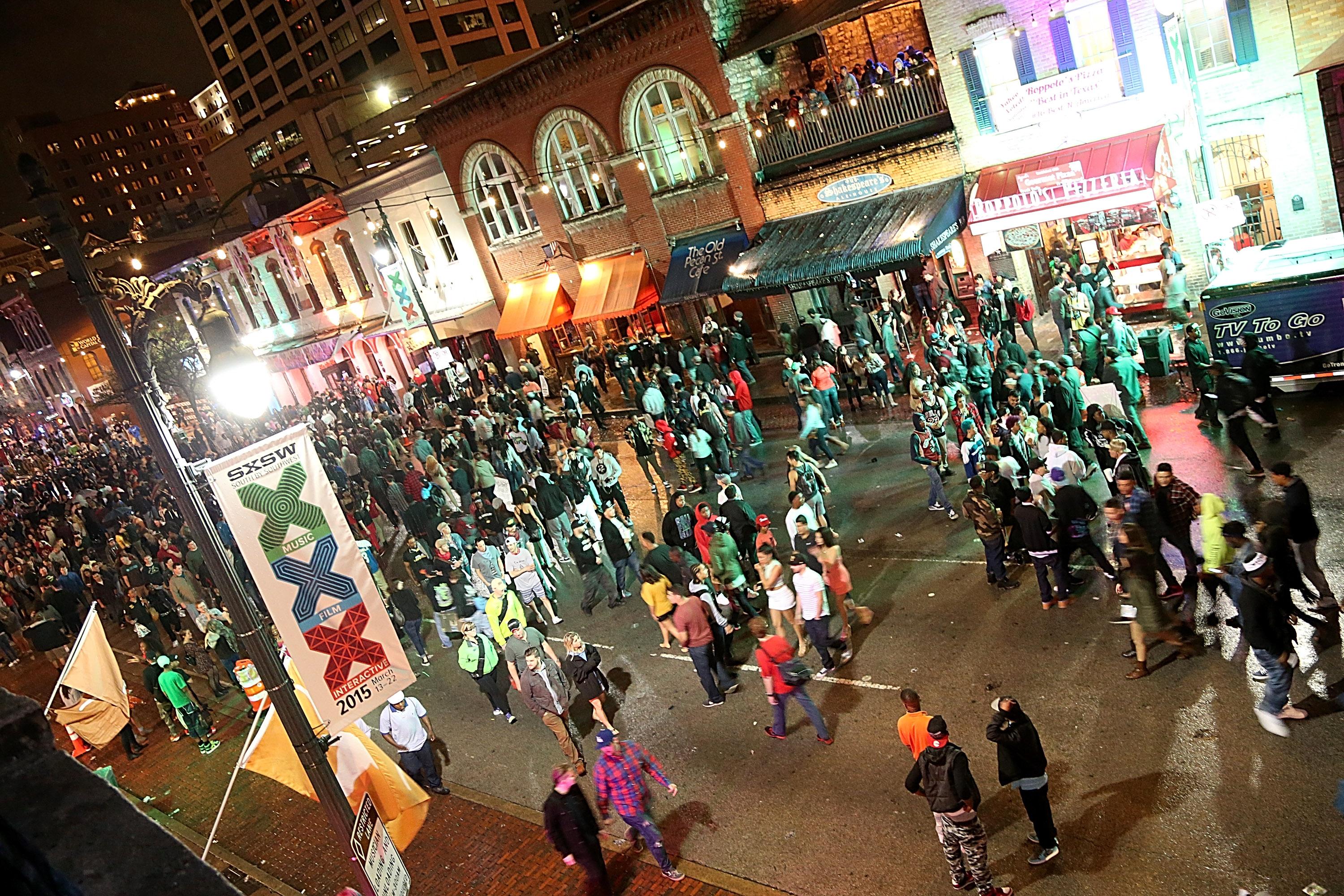 And the newest and largest outdoor music venue is the amphitheatre at the F1 track, Circuit of the Americas.

The list is endless in the city of sounds, which has changed the name of one street to Willie Nelson Boulevard and erected an 8ft bronze sculpture of the country singer and local hero.

There are 35 Gibson guitars on display around the streets and in the baggage area at the airport.

Every October, the Austin City Limits Music Festival in Zilker Park attracts 450,000 people, but it is just one of many festivals in good-time Austin. 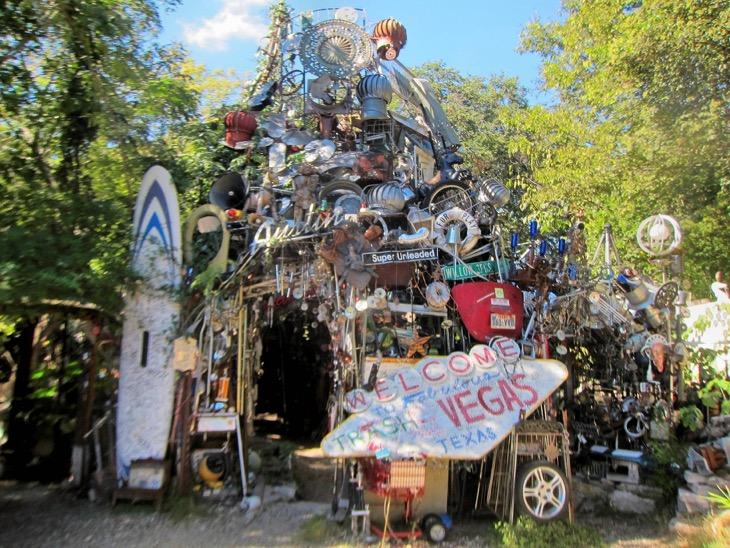 You name it, there’s a festival for it, including rodeo, arts, biker, tequila, yoga, film, craft beer, wine and even one called Keep Austin Weird.

They are always packed but then the city gets 32million visitors a year and is home to the University of Texas with 50,000 students.

These figures also explain why there are 2,000 street-food trucks, with wacky names such as Urban Cowboy and The Big Kahuna, selling all sorts of cuisine from sausage and steak to salads and shrimps.

Perhaps the most famous is Torchy’s Tacos, which also has a restaurant in town where, despite being 45 years old  and a famous TV chef, James Martin recently ate his first ever taco.

The Yorkshireman described the experience as like “eating a full English in a wrap, with cheese”. 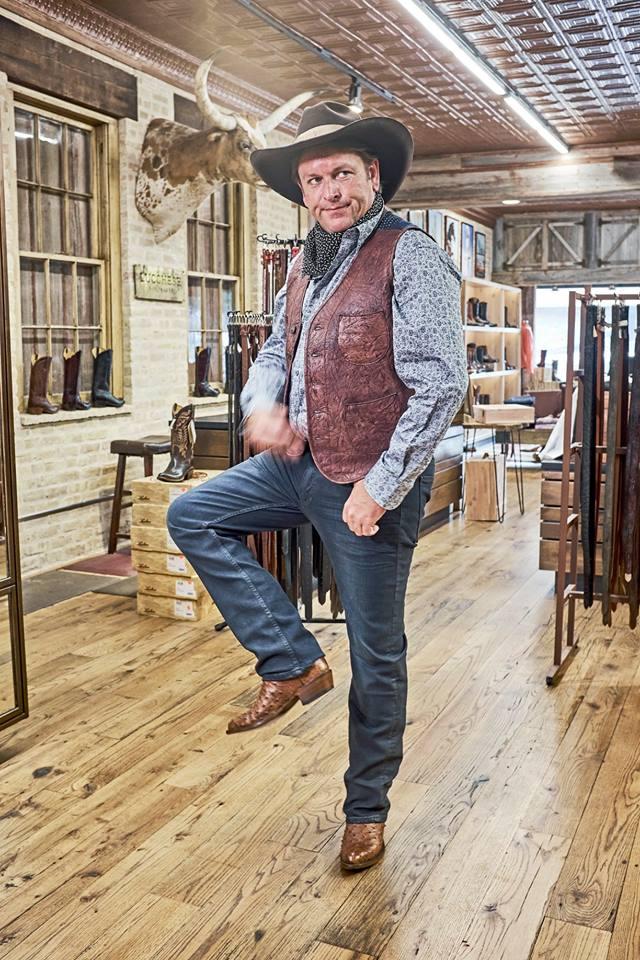 I opted for a Migas, with scrambled egg, crisp corn tortilla strips, green chillies, avocado, and salsa and cheese — now that’s a wrap!

There is no shortage of ways to burn off fat, especially around Lady Bird Lake where you can run, cycle, row, kayak or swim in Barton Springs pool — three acres of natural warm water. Or whiz round the lake and city on a bike tour with Rocket Electrics, it’s brilliant fun.

The lake, a reservoir on the Colorado River, is named after the wife of Lyndon B Johnson, the 36th US President.  Lady Bird, a nickname from when she was a toddler, loved the outdoors — and the beautiful wild flowers alongside her home state’s highways are just part of her legacy. 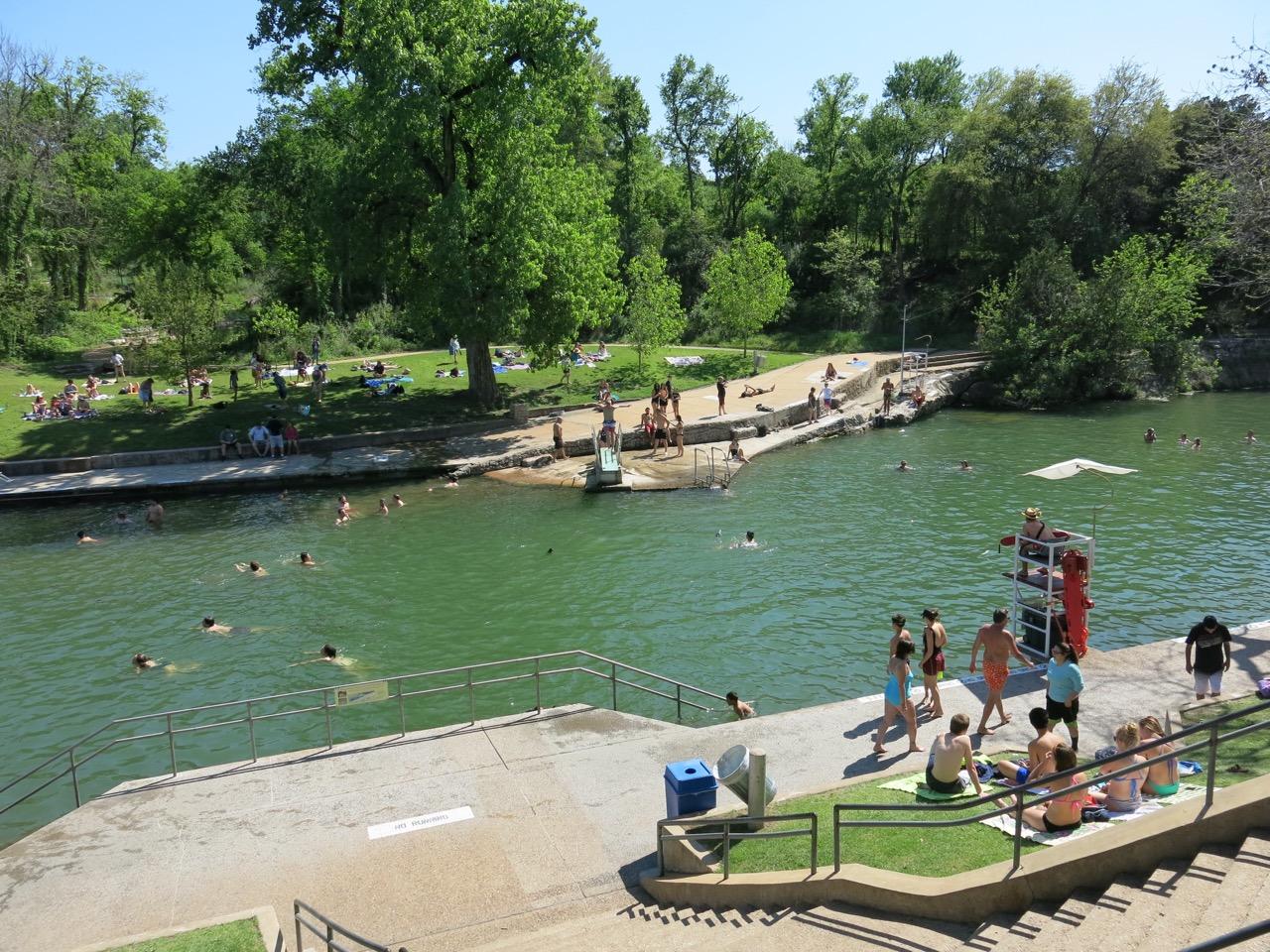 The Johnsons’ first date was at the Driskill Hotel, a beautiful boutique property with stained-glass windows, carved wooden staircases and cowhide chairs.

Forget tacos, go there for breakfast and taste the most scrumptious iced cinnamon buns ever created.

Guide Jason Weems, of Austin Detours,   is full of facts about his home: “We have seven museums, 17 libraries and a Capitol building containing two million stars.”

One of the stars in the impressive and quite beautiful granite powerhouse of Texas — nicknamed the Lone Star State — is 8ft wide and 218ft up in the dome. 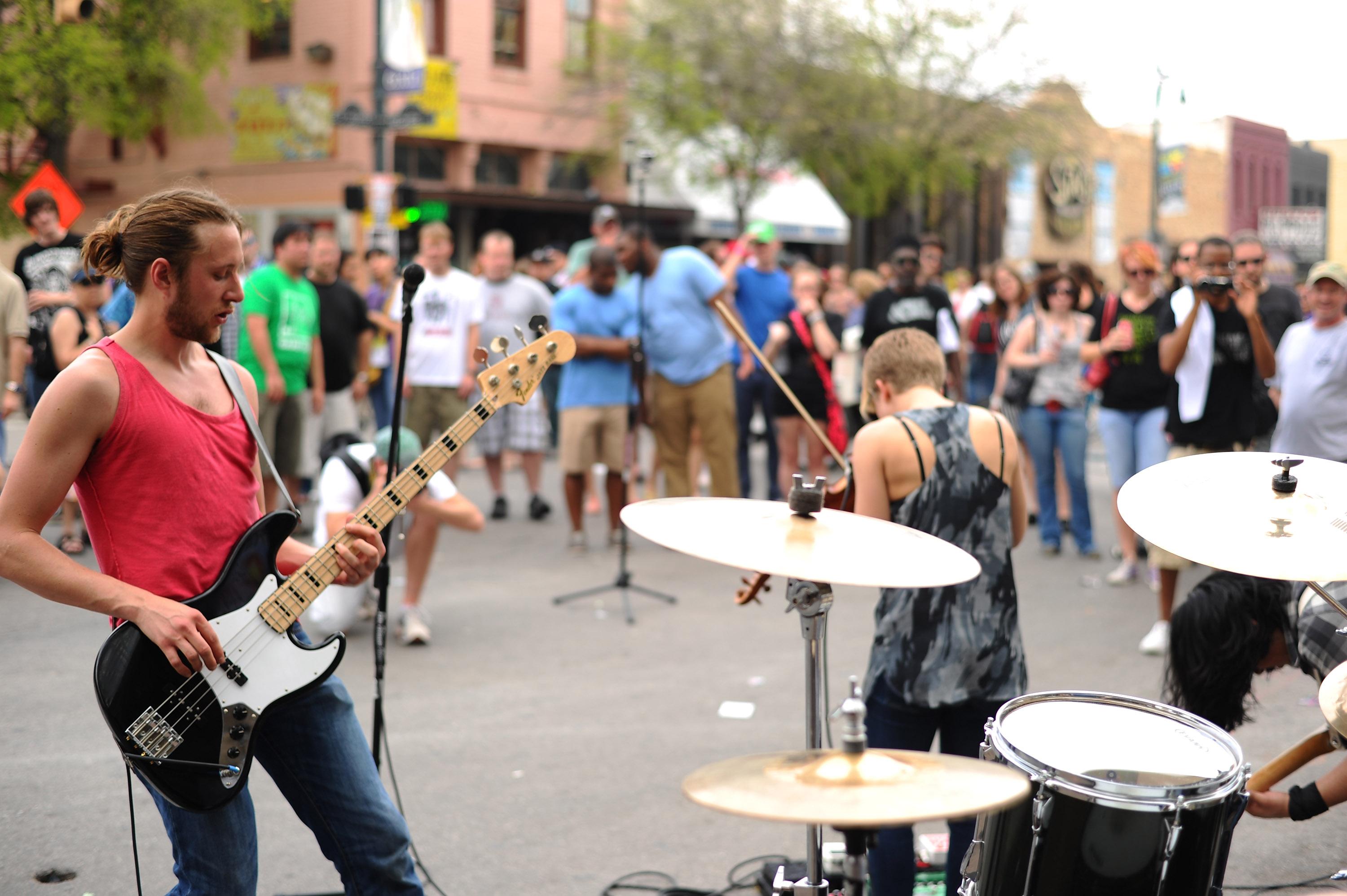 But the most astonishing figure Jason threw at me was the number of urban bats that fly out from under Congress Avenue Bridge before sunset every night from March to October: 1.5MILLION.

The shops are cool too, so go look — even if you don’t buy from the vinyl in one of the world’s best record stores, Waterloo Records, or the crazy array of boots and Stetsons in Allens Boots.

There are lots of individual boutiques and retro stores, thanks to the Keep Austin Weird campaign.

But designer brands and high-street shops are there, too, and I could easily have spent a day at one of the malls, The Domain, just a short cab ride from my hotel. 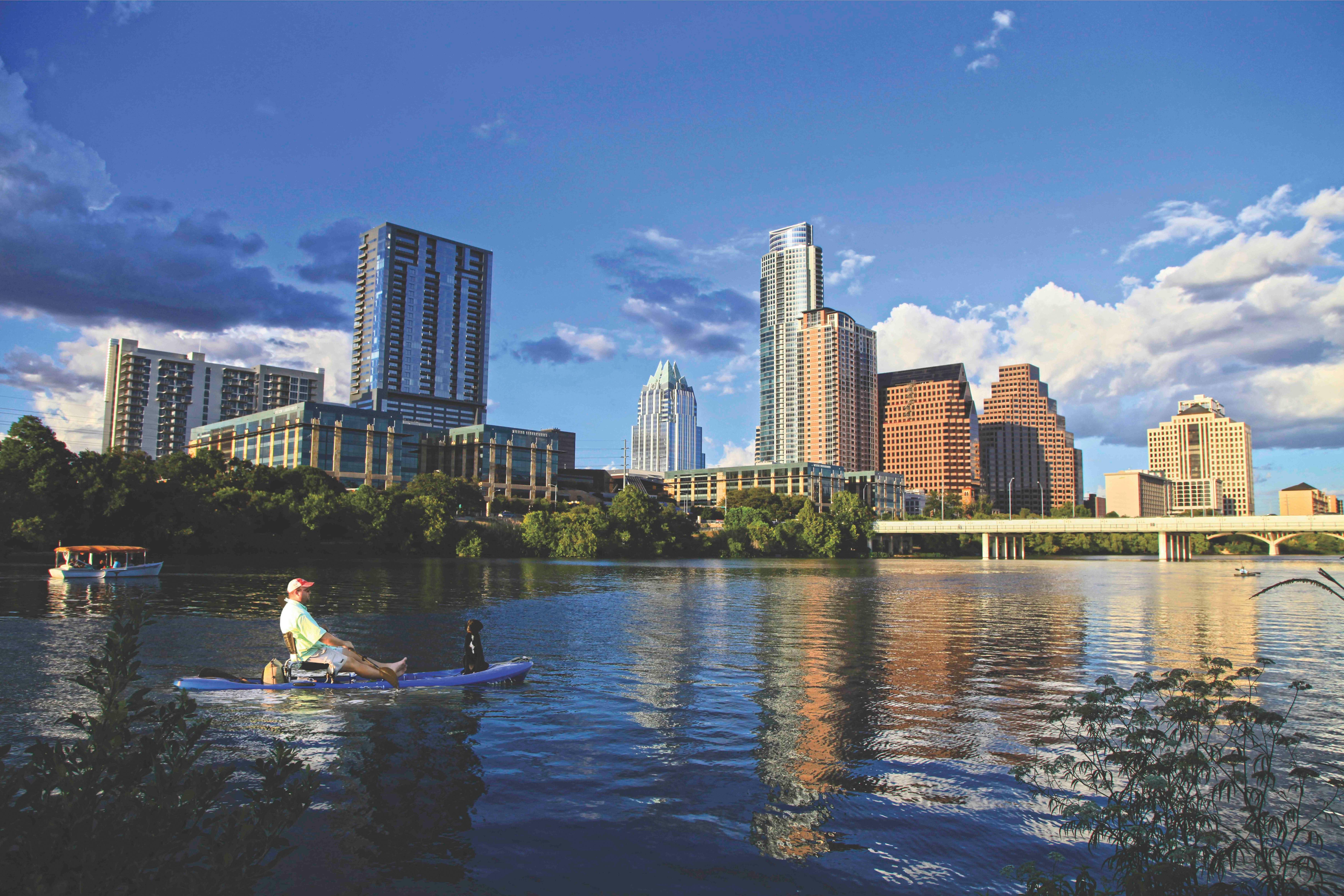 I stayed at the newly opened Fairmont Austin after flying to the city on Norwegian’s new three-times-a-week Dreamliner service from Gatwick.

The swish but super-friendly Fairmont has a gorgeous terrace pool, spa and great bars and restaurants.

And it is perfectly positioned  for walking to most of the weird and wonderful attractions.

Funnily enough, the weirdest thing I saw was from the window of my tour bus, near from the hotel.

A guy was walking down the street with a chicken perched on his shoulder. Now that is seriously weird. 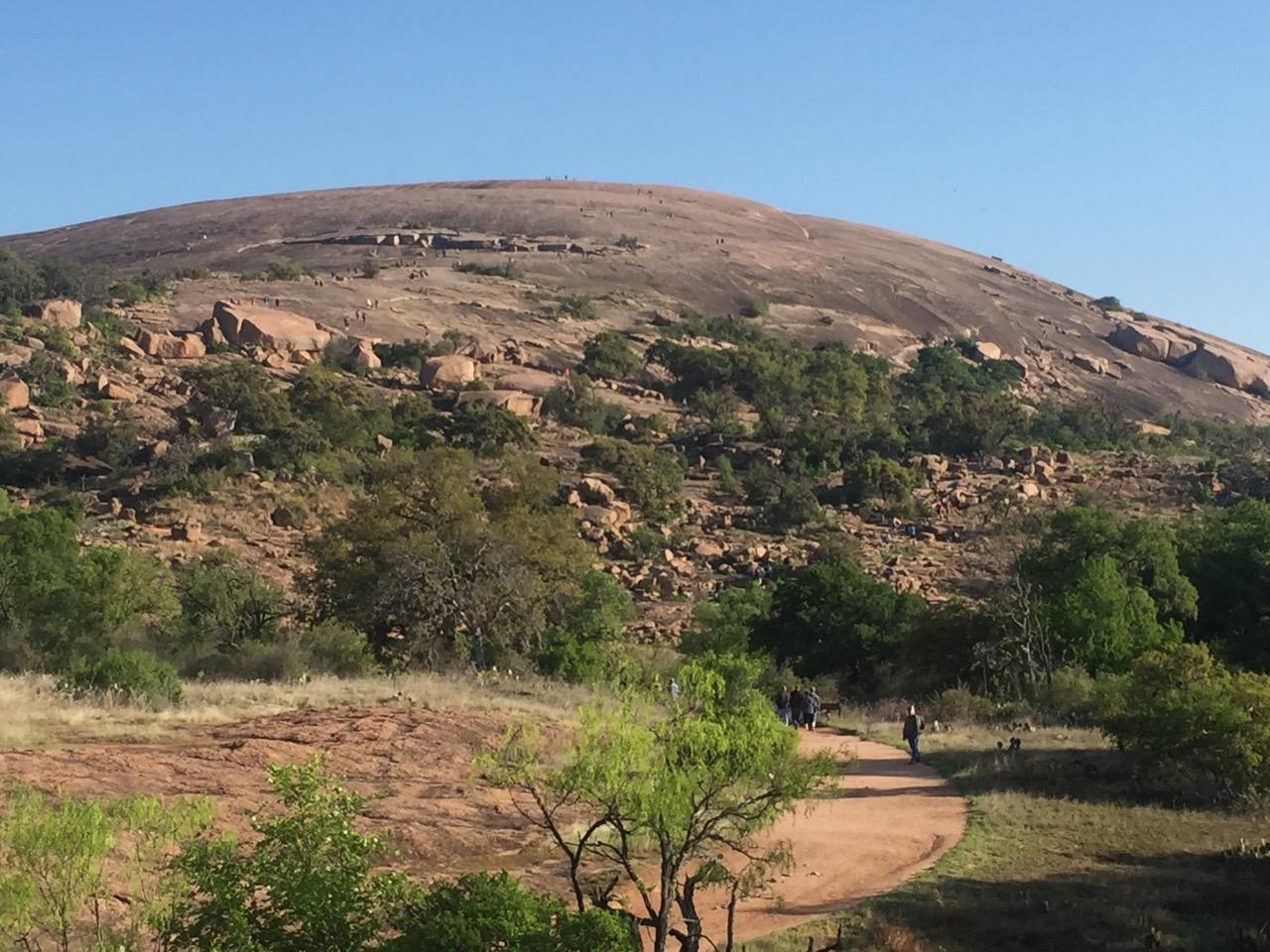 THERE had to be a price to pay for  overindulging in Austin – but climbing a 1,825ft mountain for exercise is a bit steep.

The 360-degree views of the Texan countryside from the summit of pink- granite Enchanted Rock did, however, make it worth every gasping breath.

The protected natural park is outside the old town of Fredericksburg in Hill Country,  80 miles from Austin.

The quaint traditional town was founded by German settlers in 1846 and original buildings now house the Pioneer Museum.

With art galleries, crafts, home and clothes shops, Fredericksburg is firmly on the tourist map – and more recently because of its wine. 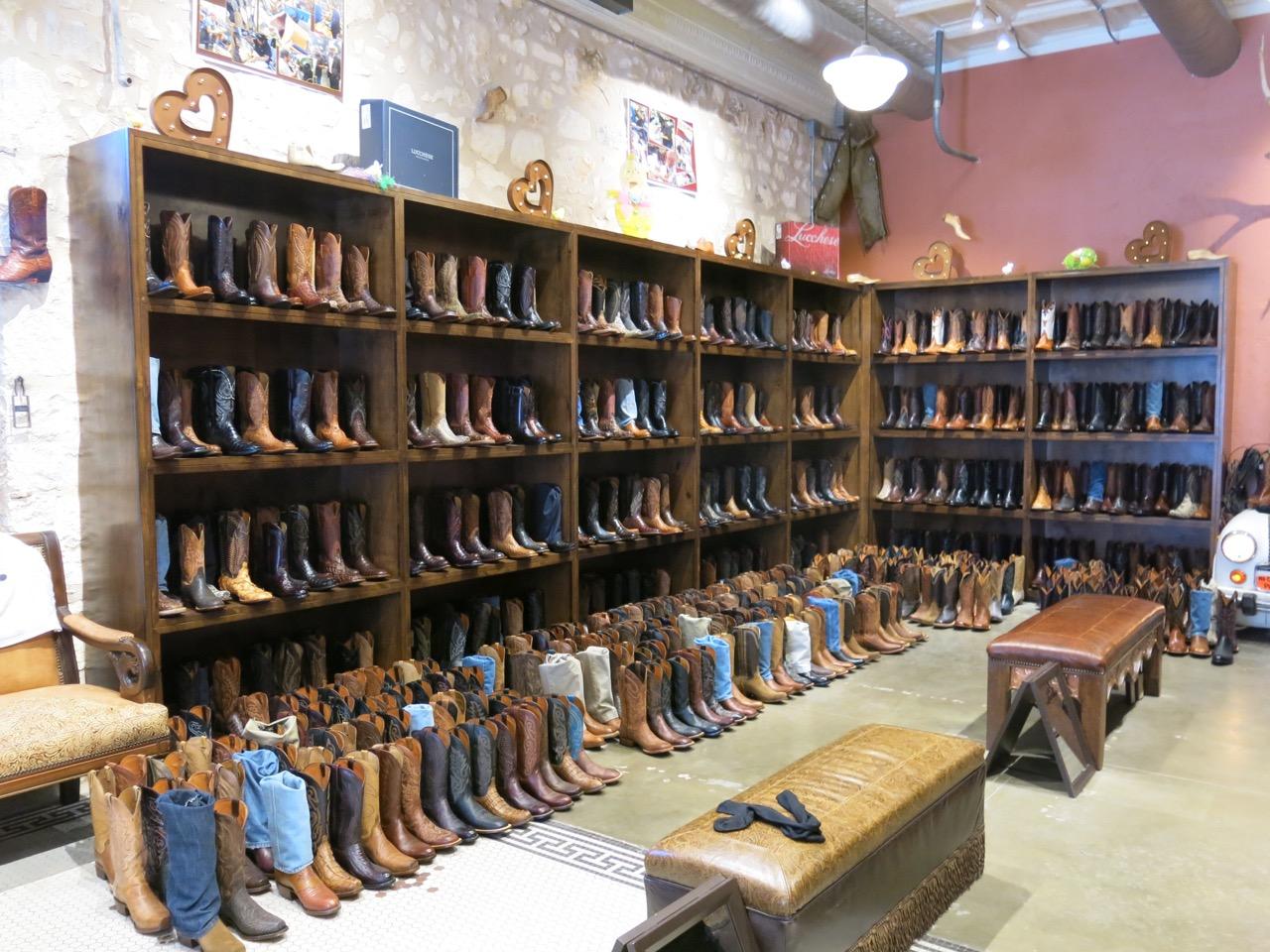 There are 30 vineyards in the area, many offering wine-tasting.

Go to 4.0 Cellars for a wine-and- cheese experience – and hope you get Jimmy, who is a Texan star.

Explore Hill Country by car or on one of the many tours from Austin.

There’s a variety of accommodation here, including the Inn on Barons Creek with rooms from just over £100 a night.

My favourite place was laidback Luckenbach Texas, a one-time trading post that was turned into a mini-Glastonbury, where all local legends such as Willie Nelson have performed.

Grab a beer, sit on a bench and listen to live music al fresco.

Back in nearby Fredericksburg, don’t leave without one last taco from Tubby’s Ice House and, perhaps, loaded fries.

Not a mountain in sight.