Flying with a small child is difficult enough. Now try to get one to keep their mask on. 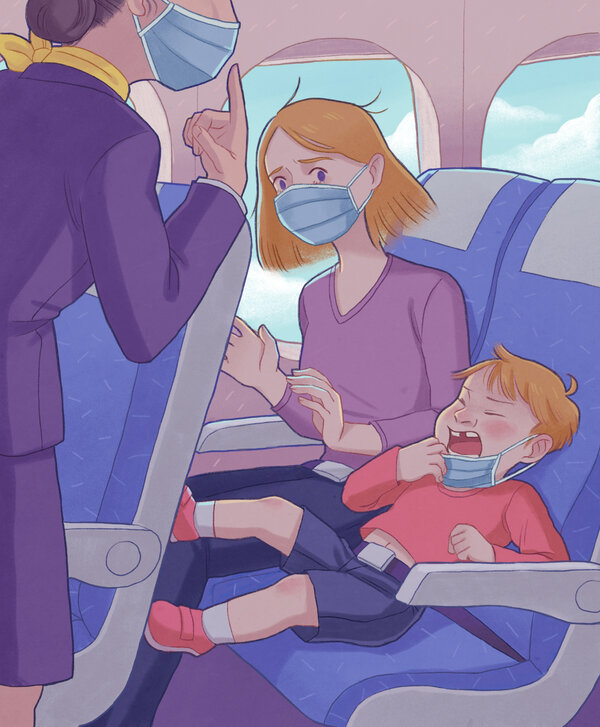 At some point this winter, my wife and I are hoping to take our daughter to visit her grandparents on the West Coast. We live in New Jersey and haven’t seen my folks in more than a year. Our daughter will turn 2 in January and has no experience wearing a mask yet. We follow public health policies to a T and respect the overall good they bring; however, I can’t help but worry about what might happen if my daughter refuses to keep it on for the duration of the flight. How strict are airlines being? What can I do to prepare? Howard

As a mother and travel columnist, I’ve thought about this a lot. We haven’t flown with our 2-and-a-half-year-old son since the pandemic started, but my husband and I have nonetheless debated the hypotheticals. (Me: “He’d be fine.” Him: “You’re delusional.”)

The anxiety about what could happen while traveling — at the airport, at 35,000 feet up, while stuck on the tarmac — is real, even for toddler parents who follow mask guidelines at home.

In the United States, there is no federal mask mandate for airlines, but by now most have adopted the public-transportation recommendations outlined by the Centers for Disease Control and Prevention: Anyone age 2 and older has to wear a mask while in public. But there are some subtle differences.

Delta Air Lines bakes wiggle room into its official language: “Children under the age 2 and young children who cannot maintain a face covering are exempt from the mask requirement.”

A Delta spokeswoman added, “Delta people are empowered to be flexible while facilitating our mask-wearing requirement with young children for everyone’s safety.”

JetBlue Airways’ policy states that “only children under the age of 2 are exempt from JetBlue’s face covering policy, and children 2 years and older must maintain a face covering.” The no-exemptions policy has been in effect since August 10.

In an emailed statement, a spokesman for JetBlue added, “When it comes to small children, our crew members — many who are parents themselves — are aware that in certain circumstances, children may find it difficult to maintain a facial covering at all times. Our crew members will work with parents to gain compliance, understanding every situation is different.”

Southwest Airlines grants mask exceptions only in the case of eating, drinking and taking medicine.

“However,” a spokeswoman said, “Southwest expects those instances to be very brief, and customers should put their face covering back on as soon as possible.”

American Airlines’ face covering policy is similarly straightforward: “If you decline to wear one, you may be denied boarding and future travel on American.” A spokeswoman added that flight attendants “try to work with parents of young children and recognize ongoing compliance efforts.”

United Airlines seems to be the only major airline that has taken the issue of exceptions out of the hands of flight attendants. If a family raises a potential mask-compliance issue at the airport, United employees would work with Medlink, a third-party company that provides medical assistance to airlines, and the airline’s network operations center to determine whether an exception should be made. (It’s unclear how this approach would work if a toddler pulled a mask off mid-flight.)

“The airline notes that exceptions are rare and only offered when Medlink experts believe the risk is low enough to grant an exception,” a United spokeswoman said.

Stated policies are one thing, but what they look like in practice can vary widely. In recent months, there have been several reports of parents of toddlers being forced off flights for issues related to mask-wearing. In August, JetBlue made national news when a New York City mother was kicked off a flight because her 2-year-old daughter refused to wear a mask. The next month, a mother was booted from a Southwest flight from Fort Myers, Fla., to Chicago, when her 2-year-old son was caught snacking, mask-less, before takeoff.

If there’s anyone who can speak to two extreme outcomes, it’s Rachel Starr Davis, a New Hampshire-based hairstylist who was removed from an American flight heading from Charlotte, N.C., to Manchester, N.H., in September, when she tried, and failed, to get her 2-year-old son to wear a mask.

That very night, when Ms. Davis boarded the flight that she had been rebooked on, she encountered zero hassles. The airline: American.

“The pilot actually apologized for what happened to us,” Ms. Davis said in a phone call last week. “He said, ‘That technically is our policy, so that flight attendant is probably not going to be reprimanded because she didn’t technically do anything wrong. But most flight crews have common sense enough to know you cannot force a 2-year-old to do anything they don’t want to do.’”

Same airline, same airport, same (masked) parent, same (unmasked) toddler: two profoundly different experiences. Although Ms. Davis believes she was an anomaly — “I think most of the time it would probably be OK,” she said — her experience underscores the power of uncontrollable variables (a flight attendant’s mood; the vicissitudes of toddlerhood).

Which is why your second question is key: What can parents do to proactively mitigate risk?

While I’m a mother, I’m hardly a child-development expert, as my nightly battles over vegetable consumption demonstrate. So I talked to Tina Payne Bryson, Ph.D., a psychotherapist and co-author of “No-Drama Discipline,” “The Whole-Brain Child” and several other parenting books.

“First of all, don’t wait until the day of your flight to put the mask on your 2-year-old,” Dr. Bryson said. “Because our brains are wired to protect us, anything that is novel that doesn’t feel good can activate a big reactive response.”

Before the flight, Dr. Bryson recommends the “name it to tame it” approach, which she and the co-author Daniel J. Siegel introduced in “The Whole-Brain Child.” This method entails pre-emptive conversations about what’s in store (the plane is going to fly really fast, your daughter will see people wearing masks, sometimes masks are uncomfortable, yada yada). Dr. Bryson also recommended embracing play (say, masking up a favorite stuffed animal) and buying several types of masks (ones that tie around the head, ones that loop around the ears).

“They might be excited about one specific pattern, but be sure to also think about the fit and how it translates into different sensory-input experiences,” she said of the mask selection. “There’s a good chance that one will start bugging them, so I would have another option that feels different.”

All of that prep sounds fine and good until you’re on the plane with a toddler, which even in the Before Times was very nerve-racking. Say you’re in-flight and rapidly approaching tantrum-city. The key, Dr. Bryson, is to refrain from ordering children to calm down or control themselves. (Easier said than done, I know.)

“If your child is a storm, you need to be the safe harbor,” she said. “We can’t be the storm. The more stressed and anxious and reactive we are: Our children will mirror those states.”

Instead, relax your posture, pull your child close and focus on giving her a sense of safety, Dr. Bryson said.

When all else fails, Dr. Bryson recommended embracing — well, whatever works, even if that means breaking screen-time rules or resorting to some highly genius maneuvering.

“I know a lot of experts would disagree with me to use rewards or bribes, but there’s research that suggests that they actually help widen the window of tolerance,” Dr. Bryson said. “It allows kids to sit in discomfort longer — they now have a motivation even if it’s not intrinsic yet.”

If your 2-year-old daughter is already learning to “sit in discomfort,” she’s well on her way to becoming an expert traveler (see: ultra-long-haul flights in coach). And here’s my nonscientific take: All children eventually settle down, all flights end and sometimes it’s just a matter of which happens first.

Sarah Firshein is a Brooklyn-based writer. If you need advice about a best-laid travel plan that went awry, send an email to [email protected].