Revealed: Holidaymakers driving in Europe face highest petrol prices in 10 YEARS with unleaded up 16p per litre and diesel rising by 21p per litre

Holidaymakers planning driving holidays in Europe will face the highest petrol prices in over a decade, a new report has found.

Pump prices have recently been showing their sharpest monthly rises in 10 years in the UK.

And the study found that unleaded petrol and diesel fuel in 20 European holiday destinations have also risen significantly by as much as 16p and 21p a litre. 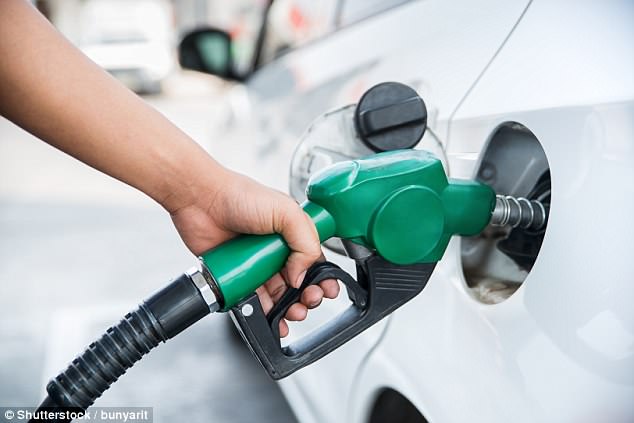 Holidaymakers planning driving holidays to Europe will face the highest petrol prices in over a decade, a new report has found

The report, complied by Post Office Travel Money, comes as one-in-nine drivers plan on driving in Europe this summer.

However, the percentage extra they will pay for unleaded petrol in most countries is lower than in the UK where the average cost of a litre stands at £1.28, 10.3 per cent more than last June.

Andrew Brown of Post Office Travel Money said: ‘The rising cost of crude oil rather than the sterling exchange rate against European currencies is responsible for the fuel price rises.

‘The fact that sterling is a bit stronger than a year ago means that price rises in Europe are generally lower than in the UK – especially outside the Eurozone in Switzerland and Sweden.’

The biggest price rise is in France, the most popular motoring holiday destination, where over half (51 per cent) of British motorists have driven in the past.

The cost of a litre of unleaded petrol has risen by 16p (up 13 per cent) over the past 12 months. 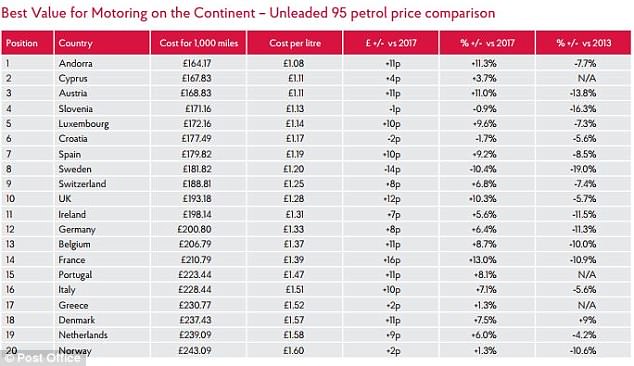 There is better news for motorists planning trips to newly-popular Slovenia and Croatia – three of the 20 destinations surveyed where unleaded petrol prices have actually fallen year-on-year.

And there are even greater gains for motorists driving across Sweden. Drivers will benefit from a 14p fall in the cost of unleaded petrol to £1.20 a litre and a 13p drop in diesel prices to £1.18.

The cheapest fuel is again found in Andorra. Despite an 11p rise, a litre of unleaded petrol costs just £1.08 – 11p less than in neighbouring Spain and 52p less than in Norway, the most expensive country in the survey.

At 95p for a litre of diesel – up 12p on last year – Andorra is the only destination where diesel has dipped below the £1 litre. Luxembourg comes close, with diesel costing £1 and unleaded petrol priced at £1.14.

Motorists driving a diesel car will pay considerably less in almost all the countries surveyed than for unleaded petrol. 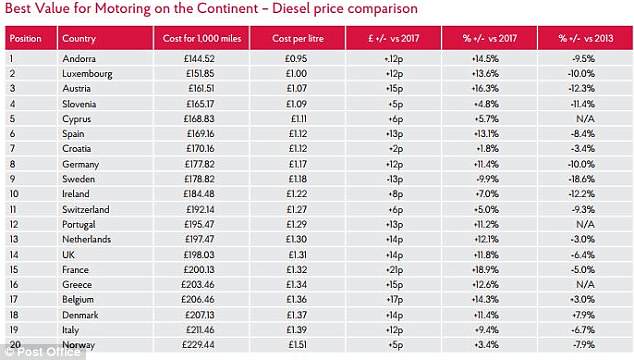 The prices of diesel across 20 countries in Europe. The cheapest place to buy it is Andorra, where it is 95p per litre

The only exceptions are Switzerland (up 2p) and the UK (up 3p). By contrast, diesel costs 28p a litre less than unleaded petrol in the Netherlands.

However, even though fuel costs may have risen in the past 12 months, they have fallen sharply compared with five years ago when oil prices were lower and sterling was weaker.

Post Office Travel Money compared its 2018 Motoring on the Continent Report prices with those collected in 2013 and found that the cost of both unleaded petrol and diesel is lower in the majority of destinations, with the biggest fall of 19 per cent in Sweden.

Mr Brown added: ‘It may not make sense for holidaymakers to plan big detours just a save a few pounds, but the higher price of motoring on the Continent this year means they should plan their routes carefully before setting out so they keep costs down.

‘It will pay to do some homework in advance because our latest report has found a difference of up to 52p a litre in fuel costs across the Eurozone.

‘One of the ways in which holiday motorists can keep fuel costs to a minimum is to divert off the motorways to fill up at a supermarket. Just like in the UK, these can be the cheapest places to buy fuel, whereas motorists are likely to find the highest prices on main roads.

‘Remember that plastic is not universally accepted in European petrol stations so it is worth getting foreign currency before you go.’