Holidaymakers travelling on Ryanair and Easyjet could face travel chaos again this weekend due to yet another strike by French air traffic controllers.

Passengers are being warned of significant disruption due to the walkouts on Saturday and Sunday at airports including Nice, Marseille and Lyon.

And according to Ryanair, the planned strike set to start tomorrow, will be the ninth weekend in the past 13 that there has been strike action involving French air traffic staff. 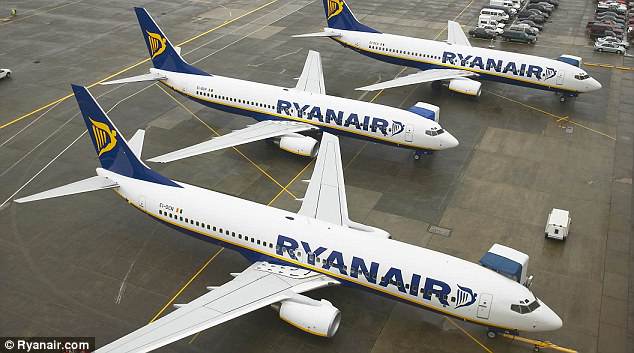 The Dublin-based carrier said that it has already cancelled up to 100 flights over Saturday and Sunday but that affected passengers have been informed.

Ryanair told MailOnline Travel: ‘Due to yet another French ATC strike, Ryanair regrets to inform customers that it has been forced to cancel a number of flights on Saturday and Sunday (30 June and 1 July).

‘All affected customers have been contacted by email and text message and advised of their options: a full refund, rebooking on to the next available flight or transferring to an alternative flight.

‘As a result of this unjustified strike action, we also expect some significant delays to flights to/from/over France and we advise customers due to travel on Saturday and Sunday to check the status of their flight on the Ryanair.com website.’

Meanwhile Easyjet also warned passengers there could be disruption and asked customers to check before they travel.

The budget carrier said: ‘Due to a French air traffic control strike starting on Saturday 30th June through to Sunday 1st July 2018, our flights could be affected.’

The airline also added on its website: ‘We expect delays and cancellations to some of our flights across the network. 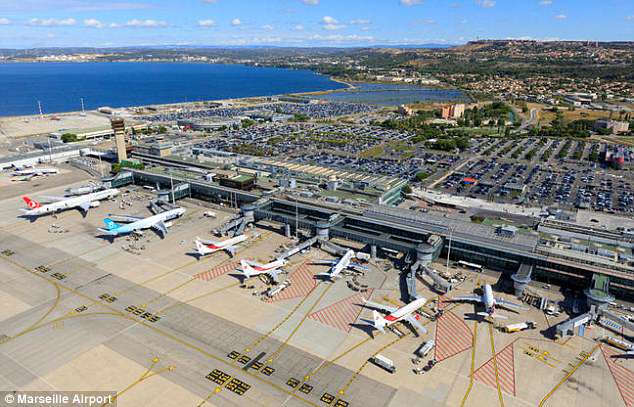 Irish airline Aer Lingus also said four of its flights will also be affected by the strike but added that affected passengers would be changed on to alternative services free of charge.

However, British Airways says it plans to operate a normal schedule.

The latest strike comes after Ryanair and British Airways owner International Airlines Group said last week that they would file a complaint to the EU over what they say is France’s failure to tackle crippling strikes by air traffic controllers.

They say repeated strikes by French controllers, particularly in Marseille, are having a devastating impact on schedules, with more than 750,000 passengers having flights cancelled in the first five months of 2018 alone.

IAG chief executive Willie Walsh said passengers were being denied their right to free movement, which is enshrined in EU law. 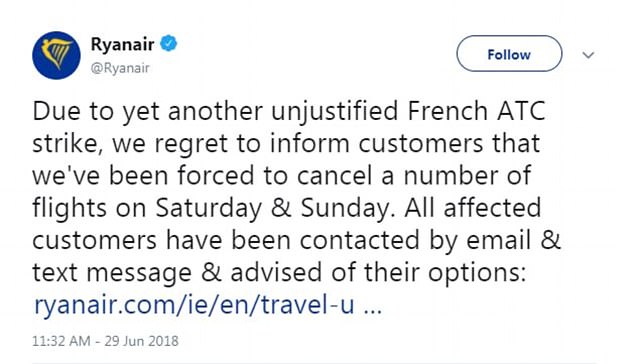 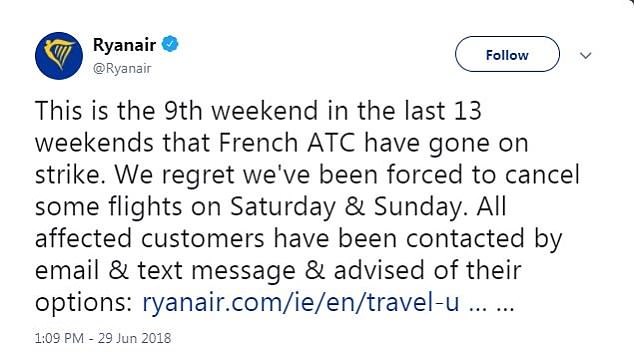 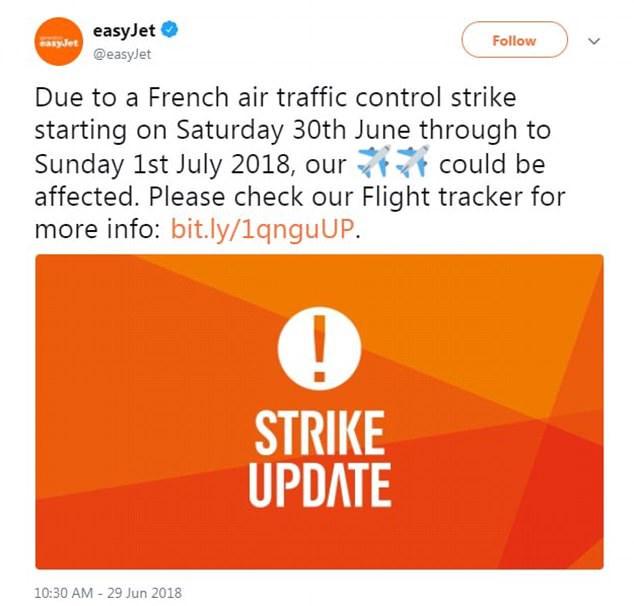 While Michael O’Leary, Ryanair’s outspoken chief executive, said 2018 was on course to be the worst year ever for controller strikes, with 28 days lost already.

‘You can’t have the freedom of movement if a couple of hundred air traffic controllers in Marseille are going to shut down the skies over Europe on a regular basis,’ he told reporters.

The Marseille control zone is a particular problem because it covers part of the western Mediterranean that many flights from Barcelona and the Balearic Islands – major tourist destinations – pass through.

Walsh and O’Leary said they were disappointed at the lack of action from the European Commission, the bloc’s powerful executive arm.

They called for air space above a certain height to be designated as European, so that planes flying over an area affected by a controller strike could be managed by authorities in neighbouring zones.

The suggestion was originally tabled by the commission, they said, but has not been acted on yet.