Before the Hotel Peter & Paul opened this past fall, the clutch of buildings it now occupies had been vacant for years: a Catholic school shuttered in 1993, and a beautiful mid-19th century church that fell out of use in 2001. The property, which also includes a former convent and rectory, has been revived by the buzzy ASH NYC design and development firm, with local partner Nathalie Jordi, into a 71-room hotel aiming to mix vintage aesthetics with modern perks. Located in a residential section of a city that can be surly about yet another offering to the tourists, its most impressive design achievement may be how well it blends in. The red brick structures have been elegantly restored, with no added flash and minimal signage; on a street level, nothing announces “hotel.” That light touch goes a long way. Check-in was easy, and the front desk workers seemed pleased when they figured out my companion and I were locals. 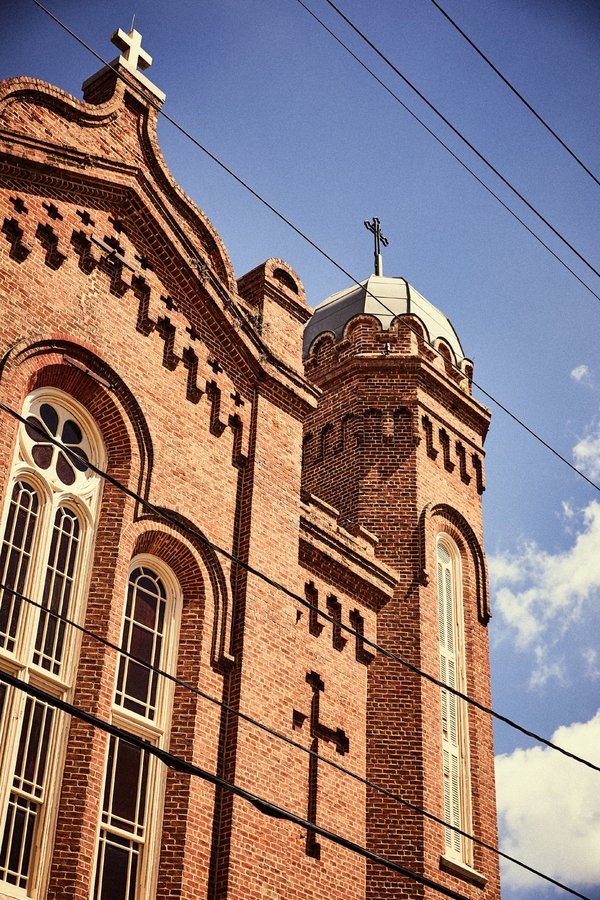 That these lovely buildings were vacant may suggest that the surrounding Faubourg Marigny neighborhood is somehow neglected, but in fact it’s thriving. The hotel is two blocks from Frenchmen Street, where a vibrant collection of live-music venues and restaurants (The Maison, Snug Harbor, Three Muses, and more) has evolved into a sort of Bourbon Street alternative for people with a modicum of taste. The Marigny is situated between the French Quarter and its many famous attractions (Café du Monde, Preservation Hall, etc.) and the Bywater, which to the surprise of longtime residents has developed a reputation as the Brooklyn of New Orleans, with various hip restaurants and bars (Bywater American Bistro, The Joint, and several dives I’d prefer you didn’t ruin). The local Blue Bikes bike-sharing system is a really useful way to explore — just factor in the raggedy condition of many New Orleans streets.

Most rooms are in the former school building, but I opted to spend a little extra for one in The Convent ($229 for a “classic” room, compared to $149 for a Schoolhouse Classic), a smaller building at the edge of the property. The room was spacious and nicely furnished; I liked the bed’s fancy wrought iron canopy frame with crosses on the corners. But it felt a little isolated compared to the school (where you check in) and its warmer and more active vibe. Worse: the Wi-Fi didn’t work. The front desk, while immediately responsive to my irritable call, seemed familiar with this issue in my second-floor room, and offered to move me. But by then I’d unpacked and it was 10 o’clock, and I wasn’t in the mood.

Surprisingly large, tile-floored and tidy, with bath products “made exclusively for Hotel Peter & Paul.” When we checked in, we were given the option of a room with a claw-foot tub, or a balcony, and chose the latter. For us this meant a disconcertingly huge shower; seriously, you could wash a pony in it. The water heated quickly and the pressure was great. (On the other hand, our balcony overlooked the parking lot.)

The developers clearly mean for the Elysian Bar, in the old rectory space, to be a destination of its own, and have partnered with the stalwart Bywater neighborhood wine shop, restaurant, and music venue Bacchanal. The food is inventive and solid: smoked gulf fish with pickled mustard seeds and avocado on toast ($11); chorizo with kale and mixed grains topped with a fried egg ($15); and confit chicken leg over excellent braised white beans ($15) all impressed. The bar is situated toward the back of the rectory building, with several warm and inviting spaces to drink or nosh, and the Thursday night crowd was lively. It felt like a discovery.

You’re on your own for breakfast, however. The “café” that opens at 7 a.m. offered only some puny muffins and a single cheese biscuit. The barista endorsed Cake Café a few blocks away. That’s further than I wanted to walk while starving, so I had a perfectly pleasing eggs, sausage, and biscuit with house jam combo ($7) at Who Dat Coffee Cafe, across the street. The hotel menu, which kicks in at 10:30 a.m., includes some brunch-y options, including a duck egg omelet with “Cajun caviar beurre monte” ($13).

On the third floor of the old school building, its auditorium has been converted into a kind of reading lounge, with the stage intact, comfy furniture, an eclectic library, and a nifty trompe l’oeil depiction of a posh drawing room. There’s also a nice courtyard area, and the church has been restored and converted into an impressive event space. As my companion noted several times, the communal space décor is somewhat comically gingham-heavy, but then some people really like gingham.

Hotel Peter & Paul is a beautiful spot in a great location for exploring New Orleans from a downriver home base, and its Elysian Bar deserves a visit. The place already feels like part of the city.