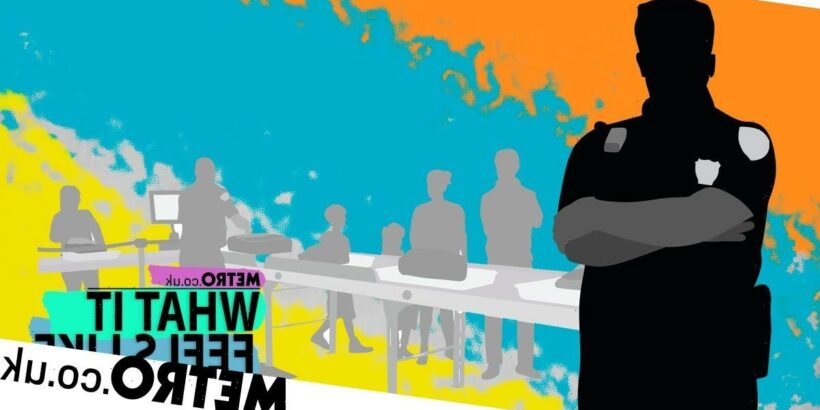 With travel restrictions easing worldwide, like a lot of the population, I’m thinking of booking a family holiday.

It’s been at least three years since we holidayed abroad. I should be feeling excited, but instead, I’m anxious.

It’s nothing to do with Covid but rather where we want to fly to. My eldest is currently going through his YouTuber phase, so it’s no surprise he wants to visit the US where his ‘idols’ live.

But the thought of getting on a plane to America fills me with dread. And it’s not because I’m a nervous flyer, it’s because of my name.

My name is Amir Khan. Both are strong and popular names in my culture.

Except, I’m often asked: ‘You’re not the Amir Khan, are you?’ I never tire of this joke, and the response is usually: ‘If I was, I’d hardly be calling to haggle a discount on my mobile contract/car insurance/TV package would I?!’

Unfortunately, my name and skin colour often conjures a negative association, too. It was after 9/11 that many brown-skinned people, regardless of their religious backgrounds, were mentally labelled ‘terrorists’.

I recall a Sikh man in the US, Balbir Singh Sodhi, being shot and killed based on this assumption. The killer reportedly wanted to ‘go out and shoot some towel heads’.

Even Amir Khan – the boxer – made news after being escorted off an American airline; allegedly for not adhering to the airline’s mask-wearing policy, amongst other reasons. However, Khan believes the incident may have been ‘racially motivated.’

Whatever the reason, I can from my own experience sympathise for being singled out at airports.

I am British born, and there’s nothing unusual about my travel history, just the regular tourist destinations around the globe. Despite this, since 9/11, international travel has become extremely problematic for me.

I’ve lost count of the number of times I’ve been held ‘pending further checks’. The repeated document examinations before and after check-in, repeated physical security searches of me and my belongings and then once again at my destination.

When security informs me that I’ve been randomly selected for additional screening, my experience tells me otherwise. Nothing feels random about these checks, but I know the best thing to do is simply go through the motions.

I’m all for additional security checks where it’s required, and I value my safety just like anyone else. I can even accept that my profile leads me to being screened more regularly, but my security screening experiences after 9/11 have almost always left me feeling somewhat violated and inferior.

I am British born, and there’s nothing unusual about my travel history

I’ve experienced the full range of extra security, from having sniffer dogs gestured to search me, pat-downs; my bags, clothes, and shoes swiped for drugs and even gunpowder (to establish if I’d been near any firearms/explosives). Most of the time these searches and questions take place in full view of other passengers.

One such instance particularly haunts me. I was travelling to a rural town in North Carolina on a business trip. My journey involved a short connecting flight from New York.

After going through additional security checks in the UK, once I arrived in New York my documents were seized at immigration. I was then escorted by two armed security guards to a ‘holding’ area.

I figured I would be asked the regular questions: ‘Why are you visiting? Who are you visiting? Where are you staying?’ and soon be on my way. I was a little more apprehensive than normal on this occasion as I only had two hours before my connecting flight.

There were three other brown-skinned males in this holding area. I watched as families, single white males and other non-brown skinned people came and went from this holding area within minutes. It was obvious we were being singled out, racially profiled – again.

As time was passing, I asked on several occasions when I could be seen. Each time the guard stated whoever was dealing with my ‘case’ would soon see me and to sit back down.

When I next saw the border control guards, four of them, all in their late twenties, casually strolled in and stood opposite me. I vividly remember they were carrying a huge box of Dunkin’ Donuts, smirking and laughing.

It felt like I was being goaded. I felt trapped and powerless in a miserable holding area, basically at the mercy of the guards so I stayed quiet.

I couldn’t help but worry about my meeting: What would my employers say? How would I explain if I missed the meeting altogether? I had to be there.

Nine hours later, tired, hungry and bewildered, I was finally called. With no apology. The border control officer simply asked me to hold out both my hands, which I did.

‘OK, you can go. The terrorist we’re looking for has three fingers on one of his hands. He lost his other fingers in an explosion.’ Was this a joke? We locked eyes for several seconds. I lowered my gaze.

With an insincere smile, she stamped my passport, and said: ‘Have a nice day.’

The border control guard told me:‘You don’t have to come to our country if you don’t like the security checks’

I arrived at 2am the following day, jetlagged, exhausted and emotional, just six hours before my meeting – relieved my baggage had made it, too.

It was six months later that I was detained again in Minneapolis. I couldn’t help but mutter: ‘Here we go again’.

The border control guard (who was Black African) overheard my comment and asked if getting stopped was a regular occurrence. After answering, he suggested I contact the Department of Homeland Security (DHS) and request a Redress Number – a number given out once the DHS has checked I’m not a security risk, which I did.

The next time I flew to the US was for a holiday – to Florida. I was held again and it was here the border control guard told me, when I asked how long I would have to wait despite having a Redress Number: ‘You don’t have to come to our country if you don’t like the security checks’. That was in 2015, and the last time I travelled to America.

I’d tried to mentally condition myself to accept this was the norm (I’d even stopped carrying a backpack as hand luggage) but no matter how hard I tried, the closer I got to the airport, the anxiety would kick in.

The thought of being singled out, questioned and searched, being the last one onto the plane then walking down the aisle looking at the faces of passengers as they see if you’re taking the seat next to them.

It was always a humiliating and emotionally draining experience and one I had no control over, simply because my name and credentials most likely hit a sweet spot on some security algorithm.

For most people flying is exciting. It’s how I once felt. I find nothing more enriching than meeting new people and learning about new cultures in different countries. But in recent years it has always been overshadowed by my negative experiences at the airport hours before.

And while I want to feel excited thinking about my trip to the US with my children – a first for them – I can’t help but worry that I’ll be detained again, now with my children. Needing to explain why daddy’s skin colour and name means we don’t get to go straight through the airport like most people.

If racial profiling is a beneficial security technique and provides an additional layer of airport security, then admit it – I get it.

But I just hope that when I next go abroad that it will be carried out in a way that avoids abuse of power, and that passengers like me are treated with some level of humanity and respect.

In this exciting new series from Metro.co.uk, What It Feels Like… not only shares one person’s moving story, but also the details and emotions entwined within it, to allow readers a true insight into their life changing experience.