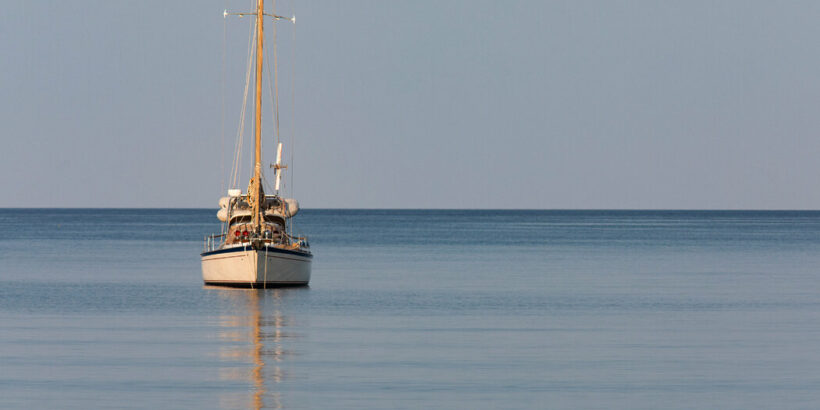 A buoy floats in an otherwise empty Lake Huron bay, a little button in the water, only a 10-minute paddle from the beach.

Below it, resting on the bottom in 18 feet of water, lies the remains of the L.M. Mason, a 125-foot wooden schooner caught by a vicious storm on Oct. 22, 1861. Carrying a load of grain, the schooner huddled in this bay off northeast Michigan’s Presque Isle peninsula along with 13 other ships to escape the winds, waves and snow. The other ships survived, but the L.M. Mason was too badly damaged and sank.

Because of its shallow resting place and exposure to the wild storms that buffet this section of Lake Huron — called Shipwreck Alley — only the hull and some supporting beams are left. But the fact that it is 160 years old and still so relatively well-preserved is testament to the unique conditions of the waters in which it rests, part of the Thunder Bay National Marine Sanctuary.

In the ocean, the wood in shipwrecks is often eaten by shipworms and the metal is subject to rust, but in Lake Huron’s cold freshwater, these wrecks are extraordinarily well-preserved. Especially in deep water. About a dozen miles from the L.M. Mason lies the schooner Cornelia B. Windiate in 180 feet of water. Sitting upright on the lake floor, the schooner is nearly untouched. Its three masts, rigging, lifeboat and even its cargo of wheat are still there, though it went down on Nov. 27, 1875.

The L.M. Mason and the Cornelia B. Windiate are two of the nearly 100 known shipwrecks that comprise the Thunder Bay sanctuary, a 4,300-square-mile underwater park in Lake Huron, off the northeast Michigan coast. It was created in 2000 as the first National Marine Sanctuary in the Great Lakes.

Think of the National Marine Sanctuary System as the underwater equivalent of the national parks. It was created in 1972 amid a growing recognition that marine areas of exceptional historical and ecological significance needed protection, too. A key event spurring the system’s creation was a 1969 oil spill off the Santa Barbara, Calif., coast, which at the time was the worst in U.S. history.

Run by the National Oceanic and Atmospheric Administration (NOAA), the system will celebrate its 50-year anniversary in 2022. It includes 15 salt and freshwater sanctuaries in places like the Channel Islands off Santa Barbara, Stellwagen Bank off the Massachusetts coast, and Flower Garden Banks off the Galveston, Texas, coast in the Gulf of Mexico. There are also two marine national monuments, one of which is Papahānaumokuākea Marine National Monument off the coast of Hawaii, which is larger than the combined area of all the national parks. It is in the process of being designated a sanctuary, which adds additional layers of protection and permanency to the safeguards.

Encompassing over 620,000 square miles of water, the total footprint of the sanctuary system is almost the size of Alaska, but because the sites to see are underwater, it’s harder to access. It’s also more difficult to count visitors to the sanctuaries since NOAA does not control full access to them, but it is likely a fraction of the hundreds of millions of annual visitors to the National Park system.

Still, sanctuaries are important factors in their local economies. Stephanie Gandulla, a NOAA maritime archaeologist and research coordinator at Thunder Bay, told me that in most years the sanctuary is visited by divers from places like Australia, New Zealand and Germany, all eager to explore wrecks such as the Cornelia B. Windiate that lie at technical dive depths. These are dives that exceed the boundaries of recreational scuba diving, usually deeper than 130 feet. They require advanced training and the use of equipment such as astronaut-like dry suits and specialized air tanks.

Diving to the wreck

On our visit we did not don dry suits or suck air from tanks. Wet suits, fins, snorkels and kayaks were difficult enough to manage — though worth the effort. We began our exploration of the sanctuary the day before our visit to the L.M. Mason with a ride on the Lady Michigan, a glass bottom boat that docks in Alpena near the sanctuary headquarters. The tour boat motors out to the waters off Thunder Bay Island, an area of several known shipwrecks. Near the island, we peered down at the shallow wreck of the wooden steam barge Monohansett, which sank on Nov. 23, 1907. The crew was saved by the United States Life-Saving Service, a precursor to the Coast Guard. Even without the glass bottom windows, the freighter’s boiler and hull were easy to pick out from the surface.

The boat tour was an entertaining and comprehensive introduction to the Thunder Bay sanctuary, but it’s hard to top the experience of floating over the L.M. Mason and diving down to swim along its wreckage. We were its only visitors at that moment and the wilderness waters of Presque Ile’s North Bay were devoid of human sound.

With the wet suit keeping me as toasty as a seal, sunlight penetrating to the bottom of the clear bay, and thick, unbroken forest crowding the shoreline, it was easy to see this sanctuary’s appeal. It was the kind of experience that gives rise to dreams of a career change, especially when I learned that NOAA employs divers throughout its sanctuary system to do research, exploration and outreach.

Jeff Gray, Thunder Bay’s superintendent, told me the lure of visiting shipwrecks is a gateway to fostering the sanctuary’s primary missions: conservation, research, education, supporting coastal communities and contributing to local economies. Initially, however, the designation of the Thunder Bay Sanctuary was controversial. Residents of Alpena voted against it in 1997, out of fears that the federal government would supplant local oversight and restrict their waters.

Today, however, those fears have largely waned. Thunder Bay is seen as a driver for the local economy, which suffered when a major paper mill closed around the same time as the sanctuary was designated. In 2012, the Alpena Area Convention & Visitors Bureau changed its slogan from “A Warm and Friendly Port” to “Sanctuary of the Great Lakes.” Three years later, in 2015, the sanctuary received broad support for its expansion from 448 square miles to 4,300 square miles.

After a day and a half of boating, kayaking, floating, snorkeling and basking in the sanctuary’s waters, the rest of our short weekend was spent not in the sanctuary but along its shoreline. We visited Rockport Recreation Area, a Michigan state park on the Lake Huron coastline between Alpena and Presque Isle. This state park, Michigan’s 100th, had a charming, raffish quality. Signs to the park are hard to find and we drove on a dirt road for so long I was sure we had taken a wrong turn. (Apparently, porcupines keep eating the trail markers.) Finally the entrance appeared, the sanctuary waters arrayed like a halo beyond the parking lot. There, we learned the park contains a ghost town, a shipwreck, natural sinkholes and a bat hibernaculum.

These features will have to be saved for a second visit, because I couldn’t pry my children away from climbing the abandoned limestone quarry along the park’s shoreline to search for 400-million-year-old fossils from the Devonian Period. They were especially motivated because Rockport allows each visitor to take home up to 25 pounds of fossils per year. But the fossil my 7-year-old had her heart set on weighed at least 50 pounds in knee-deep water, so we left it alone.

As our last stop, Mr. Gray and Ms. Gandulla showed us around the Great Lakes Maritime Heritage Center, which is temporarily closed to the public because of Covid restrictions. Mr. Gray said he was hoping the free admission museum would reopen soon, since it is the public’s gateway to the sanctuary and the nexus of NOAA’s educational, scientific and community outreach. The centerpiece is a full-size replica of a classic Great Lakes schooner, complete with the audio re-enactment of a shipwreck. There are also artifacts from shipwrecks and a history of Great Lakes shipping, starting with the birch bark canoes of Indigenous peoples and extending through the opening of the St. Lawrence Seaway.

On the way out, we visited the NOAA diver facility next door, where I met Russ Green, a former deputy superintendent at Thunder Bay and the NOAA staffer in charge of opening the newest National Marine Sanctuary, the Wisconsin Shipwreck Coast, a 962-square-mile area north of Milwaukee. It is the first sanctuary on Lake Michigan and the second on the Great Lakes after Thunder Bay.

Officially designated as a sanctuary on June 23, the Shipwreck Coast contains 36 known sunken vessels. But like Thunder Bay, there is reason to believe that many more ships are waiting to be found.

Driving away from Lake Huron, surrounded by solid land — vegetable farms and fruit orchards — I wondered about this concept of a park made of water. There was something undeniably stirring about being in the sanctuary, floating in a bay renowned for being flat calm one moment and a fury the next. It was different than visiting national or state parks. Perhaps because we were in unpredictable water, unable to touch bottom, at the mercy of something much more powerful. Shakespeare’s “Tempest,” which opens with a shipwreck, ends Act I, Scene 1 with this passage: “Now would I give a thousand furlongs of sea for an acre of barren ground: long heath, brown furze, anything. The wills above be done, but I would fain die a dry death.” I can imagine sailors on storm-tossed ships thinking exactly that.

The surface of the Earth is about 71 percent water, yet less than 15 percent of the Great Lakes and less than 10 percent of the world’s oceans have been mapped using modern sonar technology. Compared to the popular and well-trodden paths across mountains and through forests, the National Marine Sanctuaries are an entry to a world that remains mysterious. Maybe the wildest part of this country is underwater.